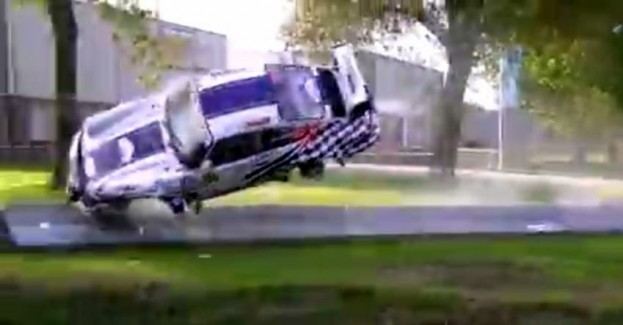 Everybody loves a good wreck…and this one’s a doozy. `

At the recent Hellendorn Rally in the Netherlands, driver Harry Kleinjan became a Youtube legend. He had neatly drifted a sharp left-hand turn in his ultra-rare Porsche 964 RSR.

Its flat-6 wailed as he picked up speed on the short straight. A right turn was fast approaching, and it sounds like Harry drops a gear before he hit the brakes and tries to turn. What happen next is a professional driver’s worst nightmare.

We’re not sure if it was driver or mechanical error, but the brakes on Kleinjan’s 911 immediately lockup, sending him sliding into a concrete barricade. The Porsche then climbs the barricade, sliding across the top to another barricade which sheers off both wheels on the left side of the car. That barricade then falls down and the RSR flips as it flies through the air, finally landing right-side down in a drainage ditch filled with water.

Kleinjan and his co-driver were miraculously un-hurt.