What are some of the coolest world records that have been completed in a MINI? Various MINI models’ appeal for record attempts is linked to their…ahem…mini size and excellent handling, making them ideal for high-speed and precision challenges, as well as for squeezing loads of people inside them.

At the same time, the ability to easily customize a MINI means that it’s been used for some daring stunts and records. Some of the best world records achieved in a MINI consequently include:

The Most People in a MINI 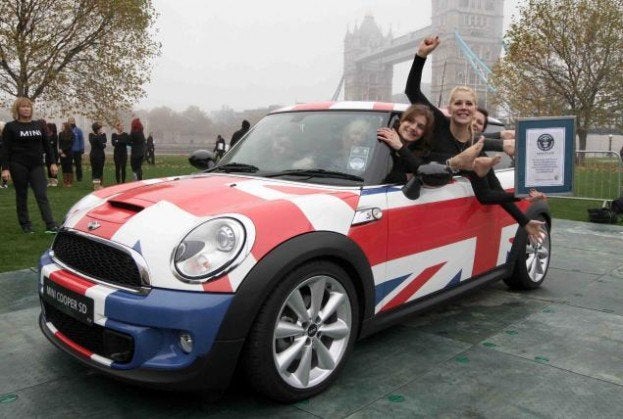 The challenge of getting as many people as possible inside the MINI is one that attracts competitors every year. The most recent record was set in November 2012 by 28 female gymnasts, who carried out the feat next to Tower Bridge in London. It took the team of girls 18 minutes to arrange themselves within the MINI Cooper, beating their own record from the previous year by one person. On the same day, the girls managed to achieve another record, fitting 23 people inside a classic MINI. Another MINI challenge that has generated significant competition for records in recent years: parallel parking at high speed.

As most of us have witnessed on any street anywhere, normal drivers have no idea how to parallel park. I’ve stood there for ten minutes watching failed attempt after failed attempt, backing in and out until they finally give up and drive away, usually out of embarrassment.

The most recent world record for parallel parking was set in 2013 by British brothers Alastair and John Moffatt, who somehow managed to get a MINI Mayfair parked between two cars with only 13.1 cm of space remaining.

The record involved parking at high speed, and sliding the MINI backwards into position, while avoiding contact with a curb and other cars. This beat the previous record set in a MINI Chinese Job challenge in 2012, where driver Han Yue achieved a gap of 15 cm.

Check out the video below: Driver and stuntman Guerlain Chicherit set a new world record in February 2013 by pulling off the first unassisted car backflip from a static ramp, and used a modified John Cooper Works Countryman to do so.

The feat was carried out at the ski resort town of Tignes in France, and used a 26 foot high ramp. The record was set after years of training and modifications for the Countryman, which was brought up to rally specs to provide the requisite amount of speed and balance for the flip. It’s a badass machine.

You can’t miss the video:

Balancing a MINI on His Head A more unusual, if no less impressive, world record was set by John Evans of Derbyshire, who managed to balance a MINI Cooper weighing 159.6 kg on his head for 33 seconds. In another attempt in December 1999, he increased the weight to 162 kg (357 lbs.)

Evans has a long career of balancing various crap on his head, including everything from quad bikes to a 20-foot vertical pole, 225 pints of beer, two girls on bikes, a cement mixer, and some washing machines.

Check out that video here (skip to about the 6-minute mark if you want to just get to the action):

Remember: all these records were attempted under strict safety conditions, and by drivers and performers with years of experience of carrying out high speed and dangerous feats. Health and safety measures were also comprehensive for all of these records.

Blah blah blah, don’t try this at home, don’t be stupid, and so on.

Still, the MINI’s versatility means that it’s likely that there’ll be some new records on the horizon. Which of course means plenty of people will be trying this at home.

Which MINI record is your favorite?