Under the direction of CEO Akio Toyoda, Toyota is in the process of changing its entire lineup to be sportier. This week we’ll see the results of the companies transformation in the newly-redesigned 2013 RAV4 compact SUV. We’ll take a ride in the mid-range XLE AWD model that came equipped with a four-cylinder engine and all-wheel-drive.

We immediately could see Akio Toyoda’s vision in the new 2013 Toyota RAV4 with its new dynamic exterior features. The fourth-generation RAV4 brings a new progressive look to the crossover. It gets more aggressive styling with a sleek-sloping roofline and aggressively sculpted front and rear fenders. And something seems to be missing from the rear tailgate.

If contemporary SUV buyers are looking for more than just a functional design and want something that has a fun character, Toyota has definitely moved the new 2013 RAV4 in that direction. The cabin of the new 2013 model resembles the outgoing model but gets better quality materials, more comfort and a few technology upgrades.

Table of Contents show
What’s new?
A significant break from its heritage
The four-cylinder could benefit from a turbo
Conclusion:

We immediately noticed the addition of a leather band running the entire length of the dash and new contrasting colors. This XLE tester ($25,690) came with an upgraded seat fabric that is definitely worth the price with its added comfort. There is more soft-touch materials in the new RAV4 but continues with some poor quality plastic in some places in the cabin. 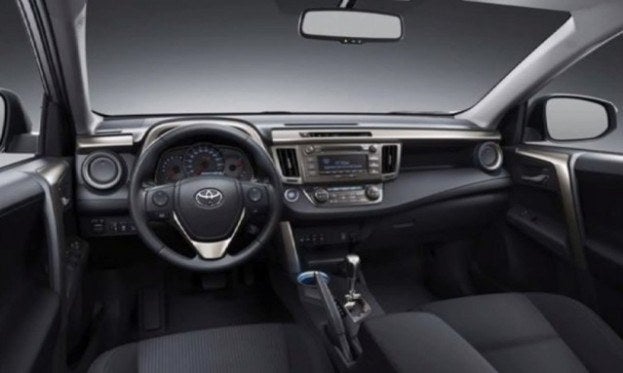 The new exterior design affects the interior dimensions in a positive way and the cargo area is deeper, larger and easier to access than in the previous generation. The cargo capacity now features just over 38.4 cu. ft. of cargo behind the rear seats. With rear seats folded, RAV4 has class-leading maximum cargo capacity of 73.4 cu. ft. We were able to load a good bit of cargo on a trip to the mountains over the long Labor Day weekend.

A significant break from its heritage

The biggest news for 2013 is the dramatic switch from the spare tire being mounted on the rear gate with a space-saver spare tire stored under the cargo floor. Toyota engineers also made a “significant break with its heritage,” by changing the side-hinged rear door to a convenient roof-hinged liftgate. My wife said the change made it easier loading the groceries into the back in the King Soopers parking lot.

Driving up the mountain over Vail Pass gave us a good feel for how the four-cylinder performs. The 2.5-liter naturally aspirated four-cylinder engine produces an acceptable 176 horsepower and 172 pound-feet of torque. Toyota did away with the six-cylinder likely for fuel-mileage reasons. In high-altitude driving here in Colorado, the 2.5-liter felt a bit underpowered at times. The four-cylinder could benefit from a turbo

Altitude is difficult to overcome for a naturally aspirated powerplant and it would benefit greatly from a turbo pumping more air in. But flatlanders probably won’t complain much about the power. The new six-speed automatic gearbox is a welcome change from the old four-speed. Toyota did this for fuel-mileage reasons and it now gets 22/29 city/highway with all-wheel-drive.

The AWD features dynamic torque control to aid with handling and manages torque transfer between the front and rear wheels via an electromagnetically controlled coupling. The system worked great as we navigated a steep driveway near Breckenridge, but it’s not designed for severe off-road use. But Toyota knows the large majority of SUV owners will never take it rock-climbing.

Toyota upgraded the suspension for 2013 and the ride seemed firmer and leaned less in the corners. It felt more balanced and poised, with the suspension feeling a bit stiffer which we felt was an improvement. The new model is a bit more fun to drive, but don’t expect a premium sport SUV ride like a BMW. It’s still designed for a small family who will use it to commute on weekdays and filling the back with the kids soccer equipment on weekends. For those purposes, it’s a good choice and the price reflects what it’s designed for. The new 2013 Toyota RAV4 looks good on the outside with its new design and is comfortable and offers good utility on the inside. Doing away with the spare tire on the back gate is a big improvement as is the addition of the new roof-hinged liftgate.

Akio Toyoda’s design goals can be seen in the new 2013 Toyota RAV4 and he needed to make changes to keep up with competition from up and coming Subaru. Time will tell if RAV4 will be able to keep up with the all-new 2014 Subaru Forester that is already exceeding sales expectations.