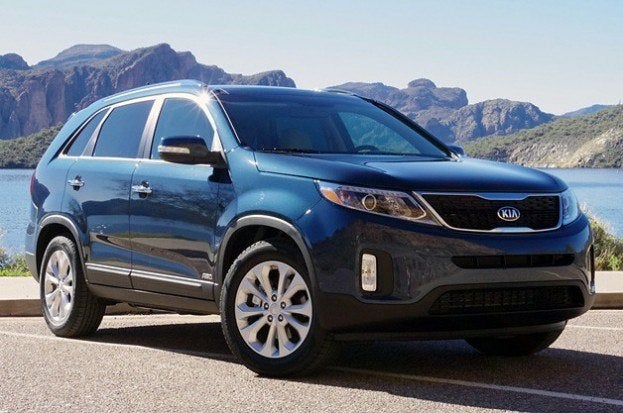 This week we’ll get behind the wheel of a mid-size SUV that may surprise buyers who haven’t looked at Kia lately. If you haven’t noticed, Kia has been making huge strides in the quality area. This new 2014 Kia Sorento is a good example of what the South Korean automaker is doing. We’ll be testing an EX all-wheel-drive variant with the V6 engine.

The Sorento is not a small crossover and this tester could feel that it has substantial size. The 2014 Kia Sorento is substantially bigger than the Honda CR-V, Ford Escape, Mazda CX-5, Toyota RAV4 and 2014 Subaru Forester who are its main competitors. This new Kia SUV has been updated on the outside, inside and underneath from the 2013 model.

Outside the first thing this writer noticed upon deliver was the new semi-circle of LED lights flanking each projector beam headlight. It received new styling updates on the front and rear that give it a wider and more pronounced appearance than the previous generation. Inside, the cabin benefits from the larger body for the 2014 model update and can be felt in the front and back. The cabin not only feels roomy, but it has lots of cargo capacity: 72.5 cubic feet with the middle seats folded flat, almost 40 feet behind the middle seats in five-passenger configuration. The second row features adjustability and respectable leg room.

This EX AWD tester ($31,700) came with a plethora of extras like leather upholstery, heated driver and front passenger seats, navigation, power panoramic sunroof and power liftgate. The Touring Package ($4,000) was the only option on this tester besides all-wheel-drive and V6. This is not the Kia that you will remember from 10 years ago. The Sorento has the feel of solid goods. Along with all-wheel-drive this Sorento EX came with a V6 engine option that is a rarity in this segment. The Mitsubishi Outlander is the only competitor with a V6 option. Kia’s 3.3-liter V6 produces 290 horsepower, and 252 pound-feet of grocery hauling torque. Fuel economy for the 3.3-liter V6 is a respectable 18/25 mpg city/highway, 18/24 mpg with all-wheel drive. It comes mated to a 6-speed automatic w/ Sportmatic.

How does it perform?

We didn’t test the four cylinder but found the 3.3-liter V6 to be smooth and generally quiet, sounding a little busy only at full throttle while pushing uphill. The Sorento weighs in at close to 3900 lbs. and it contributes to the cushy ride. The six-speed automatic manages downshifts for passing and hill-climbing while making the transition smoothly. With the V6 powerplant, it had enough power to transport people and cargo up I-70 in Colorado’s high country without much problem. Steering had no real sense of actual road feel due to a newly updated electric steering system. Most automakers are going to this as part of the ongoing effort to meet mounting EPA fuel economy standards. Don’t look for the Sorento to be a sport SUV. The driving experience is generally bland, but in this segment, it’s not really expected. Most buyers will like the smooth quiet ride.

Overall, the revised 2014 Kia Sorento is among the largest of the compact crossover utility vehicles. For families looking for more room than the competition, Sorento will give you a roomy cabin with lots of cargo capacity. Ride quality is smooth and the V6 has enough power to haul five adults with cargo.  The optional all-wheel drive is a smart option for those who live in cold climates.

Kia and parent company Hyundai has made huge strides with quality in the last few years and the Sorento has the feel of quality. Overall, Sorento offers a good value for buyers, but adding options will raise the price substantially.