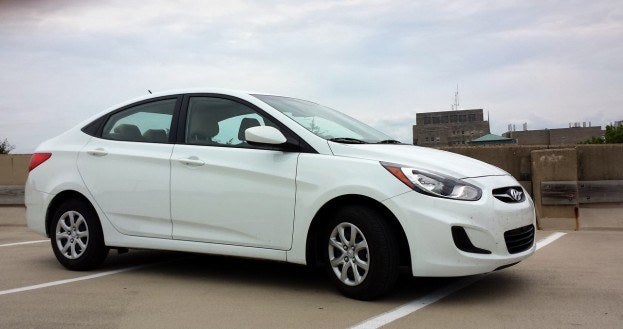 I have the attention span of a minnow when it comes to owning just one automobile. If I had my way, I’d switch cars every week. Since that isn’t possible, I sometimes rent cars for the weekend to cope.

At the mercy of the rental agency, this yields everything from the fun (Chrysler 300) to the industry mainstays (Chevy Impala). So when I strolled into the rental office that balmy Friday afternoon, I hoped to get lucky for my weekend wedding road trip.

Luck, not being a lady at that moment, had other ideas as I was handed the keys to a Century White 2013 Hyundai Accent GLS sedan.

Opting to take the ‘glass half-full’ approach, I reminded myself of Jay Leno’s quote, “Driving a slow car fast is more fun than driving a fast car slow.”

Maybe the Accent wouldn’t be so bad after all. After all, in the last year, I rented two Sonatas and an Elantra. All were solid and comfortable rides. How would the Accent stack up? The Hyundai Accent certainly isn’t unattractive. This iteration of Hyundai’s Fluidic Sculpture design thankfully inherits more styling cues from the Elantra than the baleen whale of a Sonata. Accent’s lines are inoffensive. I wasn’t as unashamed being behind the wheel of this I would have been in the awkward Nissan Versa, which should have a paper bag and Zoloft prescription provided with every purchase.

I honestly wasn’t expecting too much in terms of handling once hitting the winding roads of southern Indiana. And in that respect, I was pleasantly surprised. With its responsive steering and taught handling, it could take a fair amount of thrashing. Its 14-inch wheels firmly planted themselves in banked curves. Concerns of losing control didn’t exist. 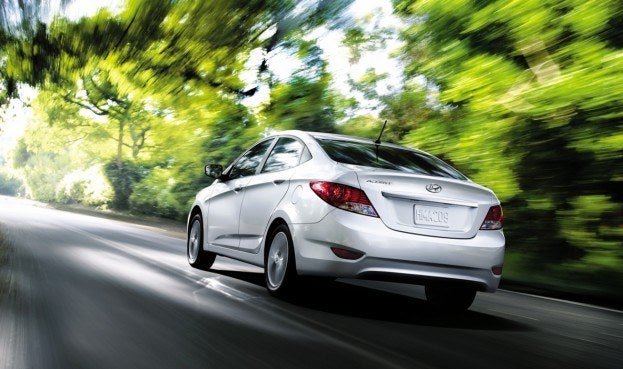 Tricking myself into thinking the Accent was a BMW was impossible with its 138 hp motor. Additional power and torque were available for overtaking, if needed, but it’s doubtful I’d be clamoring to drive this on the 405 through L.A. since ‘Accent’ and ‘rocket’ aren’t exactly synonymous.

Inside, Hyundai stuck with a simple, traditional layout. Its materials didn’t feel terribly cheap, but not remarkable, either. Plenty of storage was available throughout the car, but only the glove box did any concealing. XM Radio and the auxiliary input jacks helped make the ride more entertaining. In all, it’s what you’d expect.

Except the lack of cruise control. 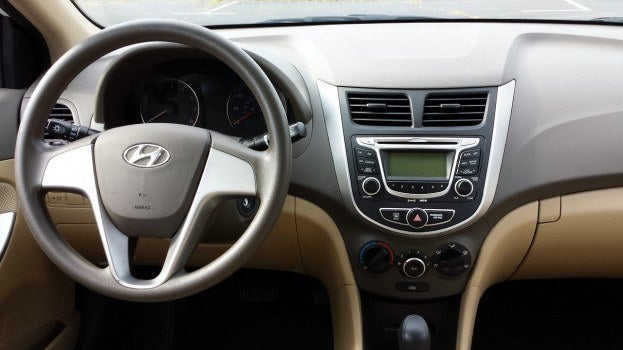 It’d been years since I drove a new car without cruise control. I mean, I know not all cars or trim levels offer it, but being so common place I forgot it’s not standard. Much like going to Europe in the summer and thinking every place is air conditioned, that’s just not the case.

Lacking cruise control likely attributed to some of the ride’s harshness since I was continuously trying to stay within an acceptable range . The seats were comfortable enough, but a three hour journey was my limit. I wouldn’t go as far as saying “padded park bench”, but bumps that would go unnoticed in larger vehicles were evident and gave “being one with the road” a new meaning. I may have physically reached my destination, but my lower back was 20 miles back on the interstate.

The Accent spent most of the weekend punching slightly above its weight, not for being incapable, but for what I was asking of it. This isn’t a car whose best attributes are demonstrated at highway speeds. It will get you where you need to go in relative style and comfort – as long as you’re not going over 60 mph. 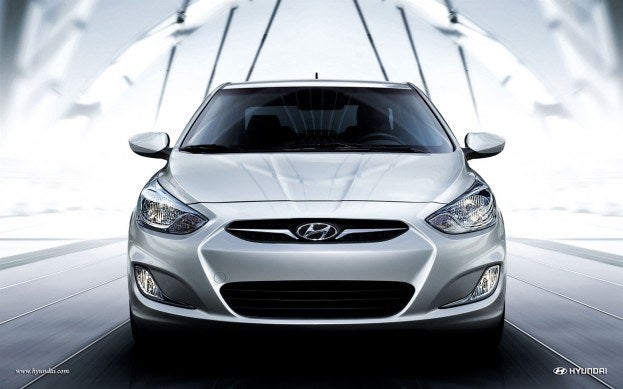 This car serves a purpose. Those shopping for a car like this aren’t trying to impress with flashiness. They’re not looking to pull a mate; they’re looking to score with high MPGs. I averaged 36.8 mpg combined.

In the end, the 2013 Hyundai Accent stacked up fairly well with a decent amount of kit respective to its competitors. The GLS model with an automatic has an MSRP of $15,545. To get cruise control, you’d have to buy the $1,200 Premium Package, which includes, among other features, 16-inch wheels and Bluetooth. At $16,745, you’re $350 shy of the SE hatchback with the Premium Package built into the price and more.

For that money, you’re better off paying another $1,000 for an Elantra or a well-maintained five-year-old BMW 3-Series.