When compiling the best of the best in each era of Formula 1 each era, one driver often stands out as a superstar. In the past several seasons, Sebastian Vettel has been quickly defining his dynasty pursuing a fourth-consecutive championship in 2013.

About a decade before Vettel, Michael Schumacher became a legend among racing legends by shattering career records for wins and poles. His biggest accomplishment was scoring seven Formula 1 World Drivers’ Championships. Schumacher broke a record for driving titles by eclipsing a 1958 benchmark set by one is arguably Formula 1’s early superstars Juan Manuel Fangio.

In a time of Formula 1’s infancy, Fangio won his first driving championship in the second year of the Formula 1 series in 1951 on route to five titles. Driving for Maserati, Alfa Romeo and Ferrari, Juan Manuel Fangio’s glory days rested in 1954 and 1955 where for drove for Mercedes-Benz. In 12 races, he captured nine grand prix victories and only missed the podium on only two occasions.

Operating from the mid-1954 to late 1955 season in Formula 1, the W196 was retired after Mercedes-Benz pulled out of motorsports following the fatal 1955 Le Mans crash. The race car has become a symbol of a sporting juggernaut was in full focus last week at a Bonhams 1793 auction at the Goodwood Festival of Speed.

The centerpiece of the July auction, a rare 1954 Mercedes-Benz W196 brought a lot to the sale. A vehicle documented to have been driven by Juan-Manuel Fangio to a pair of victories, this exact car with vehicle identification number 196 010 00006/54 won its debut event at the German Grand Prix for Mercedes-Benz.

The race vehicle was also driven by Fangio in a grand prix where he clinched the Argentinean’s second Formula 1 championship in 1954. Spending time in museum and private collections since its retirement, the Mercedes-Benz W196’s sale would again associate Juan Manuel Fangio with a record-setting performance as it found a new home.

Lot number 320 for the 2013 Goodwood Festival of Speed Sale by Bonhams 1793, no estimate was originally published in the auction catalogue on the projected value of the 1954 Mercedes-Benz W196 Formula 1 car.

While we are used to some feverish bidding at the widely televised Barrett-Jackson auction, the Bonhams 1973 sale of this former Formula 1 racing Mercedes-Benz was an experience no one would have predicted. When bidding began, the race car surged into the multiple million-dollar range. When the hammer dropped, the race-documented Mercedes-Benz W196 went to an owner that paid 19.6 million pounds or what equates to $29,650,095 US.

Becoming the most valuable Mercedes-Benz as well as priciest Formula 1 race car ever sold, this Juan Manuel Fangio driven W196 is now registers the highest value of any car sold at auction. 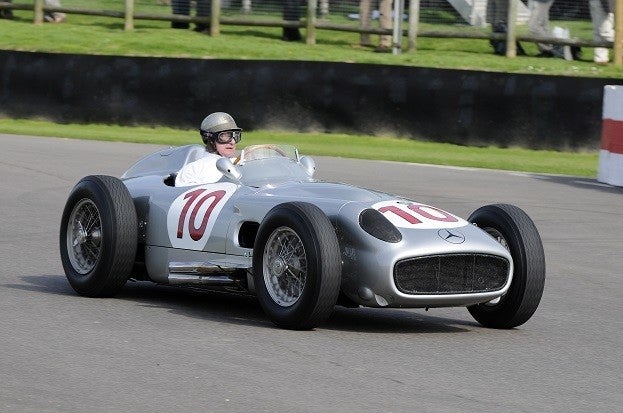 Recognizing the rarity and history attached to the 29-million dollar Mercedes-Benz W196 sold in Goodwood, finding any Formula 1 car with a significant race-used pedigree is difficult. In 2011, a 1991 McLaren-Honda Formula 1 car arranged in an art piece was sold at a Coys Auction at the Nürburgring. Sold for 187,000 euros (more than $244,000 US), a former Ayrton Senna race car was featured in disassembled components resembling a model kit.

As a former Senna car, the Toleman famously driven to second in the 1984 Monaco GP was put up for auction last year in Silverstone but failed to meet its reserve. Other recent auctions for Formula 1 race machines include a 1997 Michael Schumacher Ferrari F310 B in 2007 that sold for over a million dollars American.

Making occasion appearance in the marketplace, Formula 1 vehicles in general are rarities in the car collector world. Especially the case with Formula 1 cars since the 1980s, teams are reluctant to allow complete vehicles to be released from their control for several reasons including a fear technology could be reverse-engineered by other teams.

Past the halfway point of 2013, the auction season is reaching its most fruitful period. A Mecum auction in California will sell several vehicles with a celebrity connection. Also slated for September is a London sale for the only functioning Lotus Esprit submarine famously used in the James Bond movie ‘The Spy Who Loved Me‘.