The Toyota Corolla is an undeniably popular car. Linked to 40 million vehicles sold across the world since 1966, the Corolla smugly campaigned itself as a solid, reliable and affordable car. Despite this, the high-treading compact has been facing a competitive environment where several are vying to unseat the mighty incumbent.

Over the past couple of years, Chevrolet, Ford, Mazda and even Kia have been upping their game in the compact car category. Delivering massive improvements in design and technology, the competition has been chipping away at what has been the benchmark at the industry. With some protest from Toyota, the Ford Focus claimed crown as the world’s most popular vehicle in 2012 beating out the Corolla. While consistent, the Corolla’s ultra-conservative design and overall blandness has led some customers away from the long-reigning top choice in compact cars. Frankly, the currently sold Toyota Corolla projects the excitement of unbuttered toast. Late Thursday, a sigh of relief and a new sense of energy has awaken in Toyota dealerships as a revitalized 2014 model Corolla will soon be available. 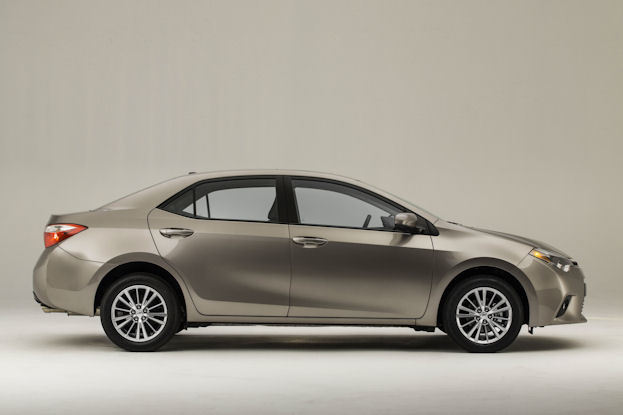 Performing a massive unveiling at Barker Hangar in Santa Monica, California, the 11th generation 2014 Toyota Corolla was formally introduced to 750 guests. As was expected, the new car borrows heavily from the Corolla Furia Concept car shown at auto shows earlier this year. Four trim levels for the 2014 Corolla will include L, LE, LE Eco and S model. Sharper edges and more defined contours shape the exterior of the 2014 Corolla while wheel arches are more defined. LED daytime running lights will elevate the cause of safety, power efficiency and style. A noticeable sloping is along the side of the sedan reveals a sleeker character for 2014. Growing over the previous car, the new Toyota Corolla is 3.9 inches longer. The only major measurement not growing on the compact car is height resulting in a sportier profile. The shortened rear deck lid as well available 17-inch alloy wheels adds accentuation to the Corolla’s new youthful character. Fun and exciting, the use of high strength steel in creating the car’s unibody will deliver high protection to the passengers of the 2014 Corolla.

The effect of a longer wheelbase is reflected in the 2014 Toyota Coralla’s expanded cabin. Refinement has lessened the transmission of road noise into the cabin contributing to a more relaxed ride for occupants. Depending on the trim level, a premium fabric or SofTex material will upholster the Corolla’s seats. The compact sedan is also more spacious for rear seat passengers utilizing the expanded wheelbase as well as space-gaining design features. Eight airbags will be standard on all models as well as power windows, Bluetooth connectivity and air conditioning. Entune infotainment system, Smart key push-button start and paddle shifters will be available to 2014 Corolla buyers. Despite being a new generation car, the same 1.8 liter inline-four engine beats under the reshaped sheetmetal. Providing 132 horsepower and 128 foot-pounds of torque, the base engine includes VVT-I technology. To extract maximum efficiency from the 2014 Toyota Corolla, an Eco model will be introduced. The 2014 Corolla Eco is being outfitted with a different 1.8 liter four-cylinder engine incorporating Toyota’s rather new valve lift and timing system called Valvematic. In addition to providing fuel efficiency over 40 miles per gallon, the Valvematic engine offers eight extra horsepower to the driver. Better aerodynamics and low rolling resistance tires will also play a part on the Toyota Corolla Eco model in 2014. For the new Corolla, Toyota is rolling out a special continuously variable transmission for the first time in North America. Called the CVTi-S, the gearbox uses a pulley-type design designed to provide the feedback close to an automatic with greater fuel efficiency. ECO and SPORT drive modes on the CVTi-S perform unique measures to enhance the road-going experience with the compact car. The CVTi-S will be the centerpiece for the 2014 model year Corolla’s technological advancement but there is will also be some more familiar transmission options offered. A four-speed automatic or an athletic six-speed manual transmission will be offered on Toyota Corolla vehicles.