Last week, Aston Martin officially celebrated the 100th year of the British brand with a far-out concept car. A working piece of mechanical art, the Nurburgring road course hosted the premiere of the provocative Aston Martin CC100 Speedster Concept. Obviously Aston Martin had fun creating the one-off concept celebrating their centennial in a gracious tribute to past sports car racing greatness. The CC100 Speedster Concept was a moment of amusement to what is otherwise very serious business for Aston Martin. With the sale of each Rapide or DB9, the British premium car builder must reach out to customers with engaging production vehicles. Facing off with the likes of Jaguar, Ferrari and Porsche in the exotic car market, Aston Martin is attentively working to strike a moving target swaying with each new innovative performance entrant. After intriguing with the CC100 Speedster Concept, fresh enthusiasm is driving Aston Martin’s newest revision to their twelve-cylinder Vantage; these changes brought to you by the letter ‘S’.

Called the Aston Martin V12 Vantage S, the company is determined to capture automotive news headlines for a second week in a row. The addition of the ‘S’ amplifies the performance personality of the Vantage line, Aston Martin has invested time on restyling and reengineering the incoming replacement to the V12 Vantage. Aston Martin’s host of advancements forges a 205 mph performance machine. Immediate styling cues such as a black-painted roof, lightweight forged alloy wheels and a more muscular appearance hints at the possibilities of the car. A noticeable change on the V12 Vantage S is the utilization of carbon fiber in the place of the aluminum grille vanes. This particular cue is directed attributed to the Aston Martin CC100 Speedster Concept.

Powered by 573 PS (translating to 565 horsepower), the Aston Martin V12 Vantage S is an 11 percent improvement over its predecessor. Though the horsepower level sounds identical to the Aston Martin Vanquish, the V12 Vantage S uses a different variation of the V12 powerplant; it’s propelled by a new AM28 6-liter, V12 engine said to be a next-generation design. Dual Variable Camshaft Timing, CNC machined combustion chambers and an advanced Bosch engine management system are key items included with the V12 Vantage S’ AM28 powerplant. An exhaust system inspired from their work on the One-77 hypercar will furnish the V12 Vantage S with the performance and sound befitting to a premium V12 sports car. In addition to the next-generation powerplant, Aston Martin is be debuting their newest transmission with the Vantage S. Aston Martin’s new seven-speed Sportshift III automated manual transmission delivers a heightened race car flavor through paddle shifters. This Sportshift III gearbox of the V12 Vantage S will take the place of the more conventional six-speed manual transmission currently paired with the V12 engine. Despite the inclusion of an extra gear and the hydraulically actuated movement, the Aston Martin’s seven-speed is over 55 pounds lighter than the manual. Ready to play host to drivers wanting to edge as close to the 205 mph top speed potential of the Aston Martin V12 Vantage S, the interior accommodates with a high-speed themed cabin. Offering personalization through seating options and different grades of leather, a Carbon Fiber Interior Pack is also available on the Aston Martin V12 Vantage S. AM’s three-stage adaptive damping system premiering on the V12 Vantage S allows the driver to adjust the ride quality for themselves and a passenger. Normal, Sport and Track mode setting presents tailored handling at the push of a button.

The new Aston Martin V12 Vantage S will be the British brand’s fastest production car ever sold. Pricing should be announced soon. 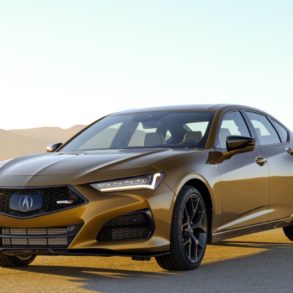