The 97th Indianapolis 500 epitomized the power and glory of motorsports. The fastest 500-mile race ever held at the Indianapolis Motor Speedway, the 2013 edition started steep in tradition as 33 drivers and teams wanted their face on the coveted BorgWarner Trophy.

Under cooler-than-expected temperatures, all race vehicles were guided to their desired conquest following a blue 2014 Chevrolet Corvette Stingray pace car. With only a five cautions slowing the Indy 500, the 2013 edition of the greatest race in the open wheel racing world was an affair leaving little margin for error. As the race reached its closing laps, the 2013 Indianapolis 500 would be a wheeled dogfight between four drivers.

On a lap 196 restart, a mad rush for the lead had Kanaan against the powerhouse Andretti Autosport team vehicles. Rookie Carlos Munoz, reigning IZOD INDYCAR Series champion Ryan Hunter-Reay and hungry third-generation driver Marco Andretti hovered around the lead throughout the day.

For what would be the final restart for the 2013 Indianapolis 500, Tony Kanaan hammered the throttle on his #11 KV Racing Technology race car to claim the lead into turn one. A crash by last year’s Indy 500 winner Dario Franchitti placed the field under caution allowing Kanaan’s Chevrolet-powered Dallara chassis to cruise cross the yard of bricks and the checkered flag first.

A fixture in big-league American open wheel racing since the late 1990s, the passionate, popular Brazilian Tony Kanaan is now an Indianapolis 500 winner. “It’s for them! It’s for them! I got a little bit of luck today,” proclaimed an elated Kanaan in victory lane where he drank and showered himself with the ceremonial milk.

Ironically, Tony Kanaan’s greatest challenge came from the racing organization he had been partnered with for eight seasons. Andretti Autosport has been exceptionally effective through the first races of the 2013 IZOD INDYCAR Series claiming three of four events heading into the Indianapolis 500.

Fielding a five-car armada for this recent contest at Indianapolis Motor Speedway, three cars were squarely in contention on Sunday. However, Andretti Autosport was simply beaten by a timely final restart by their former driver. Colombian racing prospect Carlos Munoz performed brilliantly in his first-ever IZOD INDYCAR race and Indy 500 driving the #26 car.

Qualifying second, Munoz finished in the runner-up spot behind Kanaan equalizing the best-ever rookie finisher JR Hildebrand‘s 2011 result. In third-place, Ryan Hunter-Reay piloted his #1 DHL-sponsored car across the line in a career-best finish at the Brickyard.

A favourite to win the 2013 Indianapolis 500 prior to the start, Marco Andretti finished fourth after leading 31 laps over the course of the afternoon. Other Andretti Autosport runners EJ Viso as well as James Hinchcliffe had a less than stellar 2013 race taking 18th and 21st.

Tony Kanaan completed the 500-mile distance in 2 hours, 40 minutes and 3.4181 seconds for what is now a new record pace at the speedway. The previous record stood since 1990 when Arie Luyendyk won the Indy 500. Kanaan’s 187.433-mile per hour average speed on Sunday falls short of the fastest 500-mile auto race in North America.

The record is held by Jimmy Vasser who won the 2002 CART event at California (Auto Club) Speedway with a 197.995-mile per hour average pace. Vasser is a part owner of Tony Kanaan’s winning #11 car. 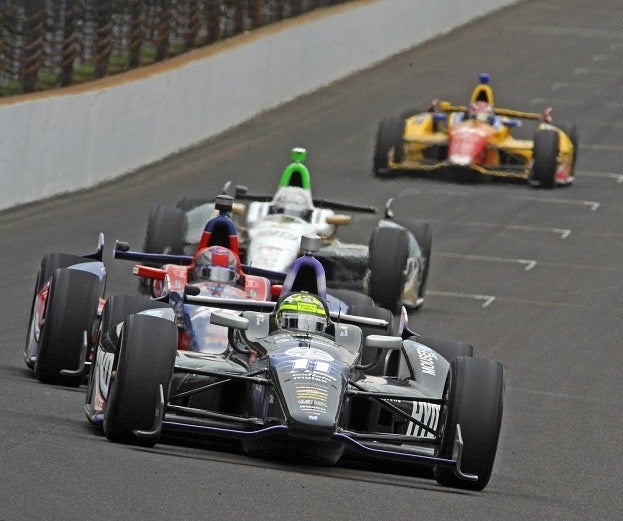 A big win for Kanaan (his first Indy 500 and first victory with KV Racing Technology), the 2013 Indianapolis 500 gave provided Chevrolet with a monumental victory at the Brickyard. Propelling the #11 car to glory, the bowtie badge made its first appearance since Helio Castroneves and Team Penske captured the 2002 race.

In an earlier Automoblog post, I omitted the 2002 win by a Chevrolet at Indy. That victory was actually achieved by a rebadged V-8 engine originally branded with the defunct Oldsmobile name. The first Indianapolis 500 win by Chevrolet since their 2012 return to INDYCAR is with the twin-turbocharged, direct-injected V-6 powerplant. In fact, Chevrolet V-6 engines propelled the top-four finishers in the 2013 Indianapolis 500.

With Chevrolet’s dominance in the Memorial Day weekend race, Honda’s streak of 10-straight Indianapolis 500 victories ended. The single turbo Honda engine was off-pace in qualifying and the 2013 race proved difficult for the Japanese auto brand.

In addition to Honda, the race proved tough for the two most successful teams at the Brickyard. Team Penske and Chip Ganassi Racing cars have won nine of the previous thirteen Indianapolis 500 races. Team Penske fielded Helio Castroneves, Will Power and a part-time effort with driver A.J. Allmendinger. For much of the race, the Team Penske flag was carried by Allmendinger who led for 23 laps.

AJ Allmendinger’s race was disturbed on lap 112 when a seat belt strap came loose forcing the #2 car to pit. At the end, three-time Indy 500 winner Castroneves finished in front of Allmendinger concluding in sixth and seventh place results.

Will Power finished the Indy 500 in 19th place with a refuelling issue proving costly late in the race. Chip Ganassi Racing’s four-car team were mired in traffic in during the Sunday afternoon race and were unable to mount a challenge to the front-runners.

Scott Dixon led the Chip Ganassi Racing team’s only lap on the 155th circuit. With the 2013 race unofficially ending with one of the #10 team car of Dario Franchitti in the wall, Chip Ganassi Racing’s Charlie Kimball collected the top finish for the organization with ninth.

As Tony Kanaan and the KV Racing Technology team celebrates their mutual 2013 Indianapolis 500 triumph, numerology appears to have played a role. Starting 12th, the #11 car was being serviced in the 12th pit stall. The number 12 was also a number carried on the race car of KV Racing Technology’s co-owner Jimmy Vasser during part of his CART career.

Another major number resulting from the 2013 Indy 500 win is 2,400,000. The Brickyard win has netted the #11 team $2.4 million in prize money. Tony Kanaan is also set to receive a 2014 Chevrolet Corvette Stingray pace car in accordance to Indy 500 tradition.