The luxury car segment is a field where many vehicles play. Commonly recognized luxury features are not hard to find in the current auto climate. These days, you can get leather seating in a Ford Fiesta. For this reason, a premium carmaker must define their cars with innovation in making the luxury riding experience unique and fulfilling.

When it comes to a flagship vehicle, luxury brands can be forgiven for pulling out the stops. Creating the updated version to their S-Class large sedan, Mercedes-Benz has readied a comprehensive level of high-end luxury.

Described by Mercedes-Benz as “The Essence of Luxury”, the German automaker has set lofty ambitions for what is the newly revealed S-Class. Radiating with a meaningful styling and new technology, the refreshed styling of the Mercedes-Benz S-Class makes the car a bolder executive ride. “Stylish sportiness and sensual forms in synthesis with timeless clarity and effortless superiority make the S-Class a true design icon”, says design chief Gorden Wagener.

The new S-Class’ exterior sports a more characterized physique. Front bodywork wraps around the car’s headlamps and larger chrome grille. A pair of side contours etches out a “convex-concave effect” creating a three-dimensional appearance along the door panels. From front to rear, the S-Class luxury sedan structure projects maturity with a playful sense of performance. It will be available in a short and long wheelbase variant. 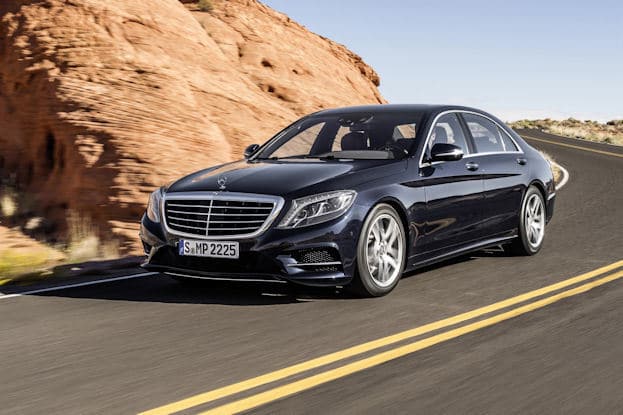 One of Mercedes-Benz’s first begging points about the new S-Class is their use of LED technology throughout the sedan. Headlamps, taillights and interior illumination are made solely possible with around 500 LEDs in place. The S-Class is billed as the first ever car without a single light bulb. Adaptive Highbeam Assist Plus and Night View Assist Plus have been enhanced.

High performance lighting is only one of the active driving features found on the new S-Class. Deeply entering the technological realm of untouched luxury territory, electronic aids create a driving sensation unlike anything else in the automotive marketplace. Adaptive Damping System ADS PLUS as well as the AIRMATIC air suspension system is in place to keep the wheels steady on the road and the ride is solid.

An optional system said to offer “the world’s first suspension with eyes”, ROAD SURFACE SCAN uses a stereo camera to regulate the S-Class’ ride. Under an extended PRE-SAFE protection array, the S-Class will electronically assist in collision avoidance. Autonomous emergency braking at speeds up to 50 kilometers per hour, rear collision warning and protection as well as smart seatbelt control are components to the PRE-SAFE technology. 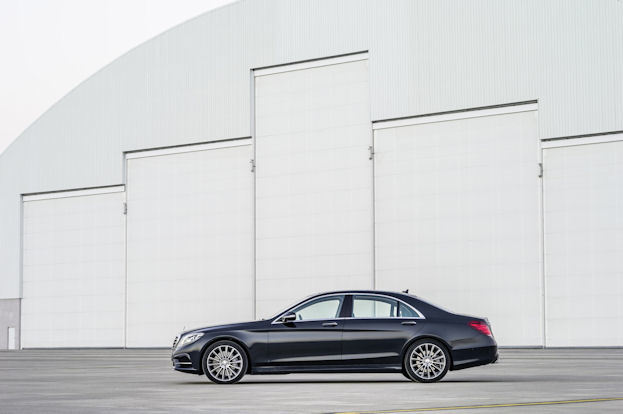 Driving the new Mercedes-Benz S-Class sedan, more headroom and additional shoulder space will provide front section riders with roomier accommodations over the previous model. Dashboard information is provided through two high-resolution TFT displays. One screen serves as the instrument cluster for the S-Class while the display on the right-hand side relays infotainment and other comfort control information.

A telephone keypad found on the center console and LINGUATRONIC powered Speech Dialog System allows the driver to exact easeful control of the infotainment features. A ten-speaker stereo system is standard with two options for upgrading the audio system. Both available audio setups are surround sound speaker systems provided by Burmester. A Frontbass system added to the S-Class involves mounting the woofers in the car’s firewall for better sound performance.

An ENERGIZING massage function for the seating uses 14 actuated air cushions in the seat back to supply the occupant with one of six message programs. One of the available cabin technologies on the new S-Class is the AIR-BALANCE package incorporating an “active perfuming system”. Fragrance choices with the AIR-BALANCE package include Freeside Mood, Nightlife Mood, Downtown Mood and Sports Mood is provided to the occupants. 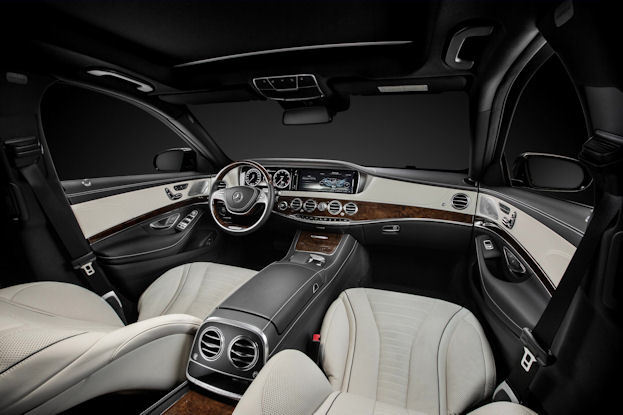 Unlike the case with most automobiles, the riding experience for passengers receives almost more focus on the Mercedes-Benz S-Class than the driver. Borrowing some of the luxury engineering that resided in the now-defunct Maybach brand, the Mercedes-Benz S-Class offers super premium backseat comfort. An Executive seat option on the S-Class permits the rear rider to recline at a 43.5-degree angle.

A “First Class Rear” option can also be ordered on the S-Class fitting a rear center console between two backseat occupants. Fold-out tables are available with the First Class Rear seating package suited for riders partaking in business transactions or a power lunch.

For a vehicle presenting so much luxury innovation, the new S-Class delivers a powertrain choice showcasing some of the vehicle’s more impressive technology. A 455-horsepower V8 biturbo engine on the S 500 model is 20 horsepower more potent its predecessor. The S 500 model is the powerhouse version of the new sedan with acceleration from 0 to 60 mph capable in 4.8 seconds. Continuing to tout a 3-liter diesel V6 engine, the S 350 BlueTEC version delivers exceptionally low fuel consumption.

Two hybrid versions of the S-Class will also be made available. A gasoline-powered S 400 Hybrid will combine a 20-kilowatt electric motor with a 306-horsepower V6 engine. Integrating hybrid and diesel engine technology together, the S 300 BlueTec Hybrid is propelled by a diesel-powered 2.2 liter four-cylinder engine married to an electric motor.

According to Mercedes’s data, the S 300 BlueTec Hybrid can potential go nearly twice the distance of an S 500 model on the same volume of fuel. An S 500 plug-in hybrid model is also expected in the near future. A responsive 7G-Tronic PLUS automatic transmission with a DIRECT SELECT lever is included on all S-Class vehicles.

Preparing to challenge the Audi A8 and BMW 7 Series, the release of the new Mercedes-Benz S-Class sedan should arrive in North America by the end of this year. At a later date, customers in the United States will gain knowledge for what models and powertrains will be available.