3M invited a motley crew of auto journalists up to their Minnesota HQ last week to unveil their latest innovation: the first DIY-friendly spray-on Paint Defender film. On Amazon now and featured at Autozone starting May 3rd, the product is really impressive and I can personally vouch for its ease of application and awesome features.

3M Paint Defender originated from DIY enthusiasts’ wish-list of products. A product that provides the stone-chip protection of professionally applied films (like the $2000-plus dealer option for Porsche 911s) but actually be doable at home by normal car guys. Those films are a major PITA for anyone who’s ever tried installing one. Much more complicated than a Di-Noc wrap, they need multiple coats of soapy water, a three-man team to align and mount, and then both sides peeled of their clear backs. A screw-up is legendary: these pro films are permanent.

It took the industrial science might at 3M to solve the chemistry riddle of a film that you spray on, but that turns absolutely crystal clear when dry, and can (for real) be peeled off later.

Those are the big differences between Paint Defender and clear Plasti-dip spray. Black Plasti-dip is awesome, make no mistake. Plasti-dip has incredible properties in the smooth and uniform way it dries, plus its ability to (sometimes) be removed from the surface. The problem is that clear Plasti-dip isn’t actually clear. A poor application leaves it pocked and milky, while the best application still can’t be done on paint because the result is a hazy matte finish.

Paint Defender addresses this weakness by drying clear and glossy, with an identical sheen to OEM clear coats. Aside from the precise application line (on a hood’s front third, for example) the deep gloss matches the bodywork color exactly.

The ease of application marks out Paint Defender as a really great product to recommend among friends. Nobody is going to come back with a horror story about this product thanks to its intuitive three-step instructions basics.

1. Clean the surface thoroughly, then apply a wipe-on/wipe-off 3M wax that’s included in the kit

2. Cover the body of the car with the included lightweight clear tarp, then mask off the area you want to spray using the included 3M paint tape. Suggested application locations are on the box as well, showing that noses, hoods, rockers and fenders are all recommended.

3. Focus on spraying small (3 square-foot) areas at a time, such as dividing a hood into two parts. Then spray on three coats in a slow crosshatch pattern for each section. The result will turn milky when it’s at the right thickness. Move to the other side of the hood, for example, to finish the job.

The 3M Auto Boot Camp technicians recommend doing this job in your garage or another enclosed space to prevent any dust from blowing into the work as it dries over 3-4 hours. A paint mask and gloves are recommended, but it isn’t a totally repulsive thing to do because Paint Defender is water-based and has virtually no odor at all.

The product is sold by the can or also as a kit (recommended) with clear tarp, pre-wax and masking tape included. One can or kit generally covers half a car hood, lasts at least one year and is safe for all future cleaning, washes and waxes. Check out the image gallery below and share your results if you do it! 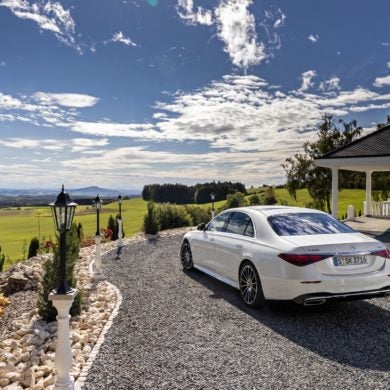