With fashion playing a part even during the infancy of the car industry, automobiles developed characteristics we continue to use to discern vehicles. While the Ford Model T became the de facto image where modern motoring would evolve, the original Detroit Electric vehicle incorporated a faux radiator grille presenting an illusion of gasoline power. This design trait is shared on the Detroit Electric SP:01 around a license plate bracket. A black carbon fiber piece is used to create an imitation opening. Electric Blue, Metallic Black, Lightning Silver, Pearl White, Ardent Red, Bronze Orange and Pearlescent Green are listed as colour choices for the Detroit Electric SP:01 sports car. Alloy wheels consist of 16-inch and 17-inch rear rims provided in several patterns available in black or silver. 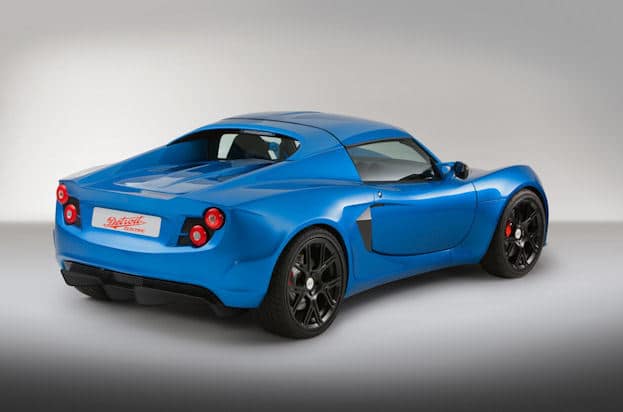 The power source for the Detroit Electric SP:01 is an asynchronous AC electric motor generating the equivalent of 201 horsepower. Electrical power is stored in a 37 kWh lithium polymer battery. Through a 240-volt charging port, the Detroit Electric SP:01 gains a full charge in a spiffy 4.3 hours. Applying a system named 360 Powerback, the SP:01 electrical system can also feed energy into a home serving as a back-up power unit. A single charge is appraised in pushing the sports car across 180 miles of road. Better than a Ford Focus Electric or Nissan Leaf, the Detroit Electric’s range is falls short of the Tesla Roadster that featured a larger 53 kWh battery. The Detroit Electric SP:01’s powertrain can be matched with a choice of three transmissions. A four-speed manual, five-speed manual or a Twinspeed automatic can provide the performance habits for the electric speed machine. With a quiet performance sound roughing overhead, the two passengers riding in the Detroit Electric SP:01 sports car sits in an interior rich with carbon fiber, aluminum and leather material. Besides the standard black colour, blue, red and tan can be chosen for the leather trim inside the SP:01. Infotainment technology is managed completely through a smartphone app. Called SAMI (Smartphone Application Managed Infotainment), vehicle functions such as audio control and satellite navigation can be manipulated with a modern touch. The Detroit Electric’s SAMI interface is also effectively in remotely managing the SP:01 sports car’s charging system.

The first Detroit Electric SP:01 model is planned to leave the production floor at the end of August. Retailing for $135,000, production of the electric sports car will be strictly limited to 999 vehicles. The limited production will also Detroit Electric to seek exemptions from certain costly measures the higher-volume conventional automakers have to endure prior to listing a vehicle for sale. It’s worth mentioning that Electronic Stability Control, anti-lock brakes and front airbags are all equipped on the Detroit Electric SP:01 sports car. Beyond the SP:01, the new Detroit Electric car company’s desire is to expand into future electric vehicle offerings.

After almost three-quarters of a century out of the auto sector, we’ll be tempted to see if the Detroit Electric name can shine in this new prime time era for electric vehicles.