And the battle for the fastest car in the world continues. Not long ago, Hennessey’s only car they make from scratch (they’re usually a tuner for American muscle cars,) beat the Guinness world record for a 0-300 km/h run by accomplishing it in only 13.63 seconds – besting the record previously held by the incredible Koenigsegg Agera R.

Now, just a few days ago, Hennessey is saying they just grabbed the title of “Fastest top speed in a production car” previously held by the Bugatti Veyron Super Sport. You can check out our updated list of fastest cars in the world for more info on others in the running.

But you’ll see that the Venom GT is under the Veyron still. The Venom GT hit 265.7 mph while the Veyron’s top speed was 267.8. How is Hennessey claiming the top speed record then?

Thing is, the Veyron ran its top speed unrestricted; the model you (well, some people) can actually buy is electronically limited to 258 mph – under the Venom GT’s unrestricted top speed, making it the fastest production car in the world from the factory. Plus, Hennessey ran this on a 2.9 mile track while the Veyron had 5.6 miles to complete its journey.

Hennessey says if they had the same amount of room, they could get to a speed of over 275 mph.

Personally, I think the Venom GT is a more impressive car and given the same conditions could knock Bugatti’s machine down a few notches. The car runs on a twin-turbo 7.0-liter V8 engine that produces 1,244 hp. In contrast, the Veyron Super Sport gets 1,200 hp with a quad-turbo W16.

Only 29 Hennessey Venom GTs will be made, and a third of those are spoken for. If you have $1.2+ million sitting around and want the quickest (officially) and fastest (unofficially) car in the world, you can still give Hennessey a call and claim one for yourself.

Which car do you think is more impressive? Check out the video and photo gallery of the top speed run below: 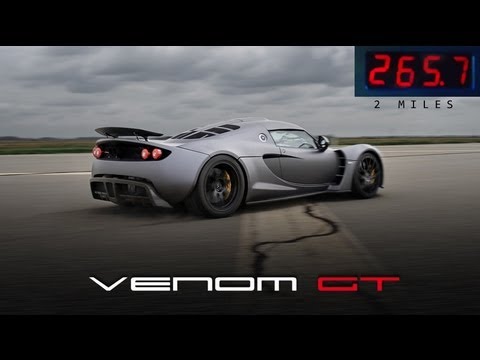