Wheldon battles under the lights Are you into racing?  The majority of the people you ask this to, whether its co-workers, friends, or a new acquaintance will say “Not really.”, or “I’m into ball sports more.”  Of the very few that are racing fans, it’s usually NASCAR. At least for Americans. Then even a smaller few enjoy open wheel racing, and usually, they watch Formula 1.  Then you get down to the very sparse lot who say they’re IndyCar fans, and most of the time they’re extremely out of touch with the sport.

You’ll get responses like “Well I used to go the Indy 500…”, or “Is Helio Castroneves still in it?”  Outside of racing drivers, or people that I talk to at the track, no one knows anything about IndyCar anymore.  IndyCar is completely overlooked and it doesn’t make any sense to me because it’s an exciting American-based sport with huge international flair.  So why is it in the huge shadow casts by NASCAR and Formula 1?

I’ll begin with F1.  They may not market in America as much as other sports, but they have worldwide following, and they travel to multiple continents and countries bringing a huge party along with them.  They have a reputation for being the best racing series in the world and having the best teams, best engineers, best drivers, and most money of any motorsport in the world.  That is how F1 started…the best…and it will always be that way.  This is all backed up by truth though because they do race the most stunning and technically advanced machines with billion dollar budgets.  Of course, any of the drivers who pilot these and are successful are going to be looked at as one of the world’s best drivers as well.  That is all it takes to fill the stands everywhere they go.  Just look at the turnout in Texas for the U.S. Grand Prix at the Circuit of the Americas in 2012; the place was sold out and viewership went through the roof!  Because it’s the best, and a worldwide sport, they will always have a huge following.  That makes sense!  I understand why American open-wheel racing is dwarfed by F1, it’s logical.  But why does the same go for NASCAR?

It’s simple marketing.  NASCAR does it…and does it well, and IndyCar doesn’t hardly do it at all, so no one sees the sponsors or names involved.  It doesn’t take much to get people to watch something. After all, look at American Idol or the X-factor, even the most inane naive shows take the nation by storm.  All NASCAR does is saturate the market with commercials and after a while people tune in because they see it thrown in their face so much.  You know who Jimmie Johnson, Jeff Gordon, Dale Earnhardt Jr., and Tony Stewart are…and the brands they’re associated with like Pepsi, Lowe’s, or Mountain Dew.  You see the brand commercials, you see the “personalities”,  you see the event commercials, they wrap it all up in a gigantic dramatized box and we gobble it up.  I bet if you walked up to people at work and asked if they knew who Buddy Rice was, or Ryan Hunter-Reay they wouldn’t have a clue.  Well Buddy Rice won the  2004 Indy 500 (The Greatest Spectacle in Racing), and Hunter-Reay just won the 2012 IndyCar Championship, both U.S. natives on top of that.  So why should you be watching IndyCar? 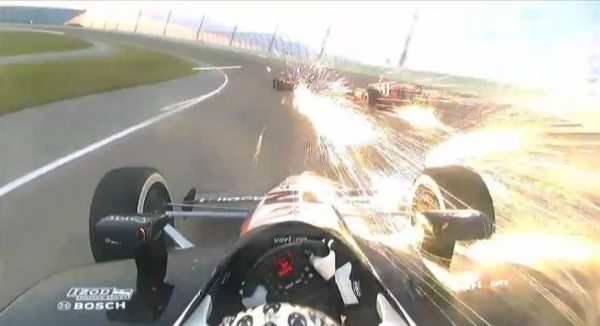 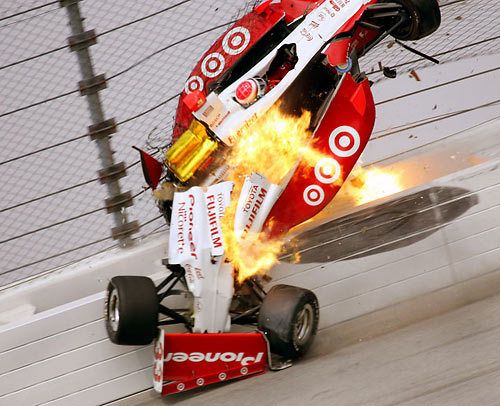 Here are the facts.  Just looking at the actual product you get or the racing that you get to see, IndyCar is more exciting than Nascar.  That isn’t just my opinion, it’s right…and I will show you why.

The cars are faster, traveling at 200-230 mph all the way around an oval while Cup cars do 140-180.  You get the best of both worlds with IndyCar, as they compete on both road, street, and oval courses.  The racing is more exciting, obviously going wheel to wheel at 230 mph is more exciting than the other.  Also to be quite honest, the danger factor is something that draws people to a sport, it is only natural to be drawn to a sport with high risk. 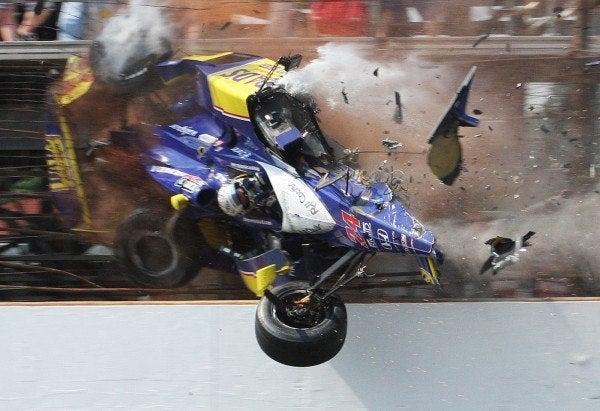 Some would argue the higher the risk, the greater the reward.  There are certainly both in the Izod IndyCar Series, such as the Indianapolis 500 Borg Warner Trophy, just to mention one.  So you have insanely fast speeds, ovals and road-course racing, spectacular crashes, and prestigious trophies.  What else do you need?  Oh yeah, story lines and personalities…yeah…it’s got those too. I’ll give you a brief overview of the happenings from the past 3 years.  In 2009 Dario Franchitti makes his comeback in IndyCar leading the championship after a full year in Nascar for Target Chip Ganassi Racing, meanwhile, upcoming road-course star Will Power from ChampCar makes his oval racing debut for Penske racing.   Franchitti wins the 2009 Championship, and that same year Will Power has a terrible crash breaking his back.  That same year in the Indianapolis 500, Catroneves wins his 3rd 500 with Dan Wheldon coming up short in 2nd. 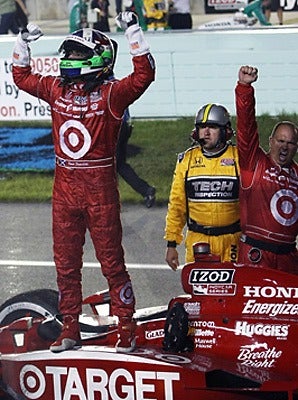 In 2010, Power made his comeback from his terrible crash, and battles Franchitti for the championship all season.  Franchitti wins the Indy 500 followed by Wheldon in 2nd, coming one place short of his 2nd 500 win for the second year in a row!  The championship comes down to the last race of the season between Power and Franchitti.  Will Power is still trying to prove himself on ovals, and crashes out on the Miami oval, handing the title back to Franchitti once again.  He dominates 2010 winning the crown jewel race, and the championship.  The stage is set for 2011, a heavyweight rivalry between Dario and Will.

2011 is here.  Wheldon is without a full time ride, but is working to develop the new and safer 2012 IndyCar. In a Cinderella story, he puts a one time deal together to run the Indy 500.  The 2011 500 ended in dramatic fashion, as the leader (rookie J.R. Hildebrand) hits the wall in the last corner of the last lap.  As his wrecked car slides towards the finish line, Dan Wheldon overtakes him for the win, and his 2nd Indianapolis 500 trophy!

The season progresses and the championship title once again comes down to the last race in Las Vegas…once again between Franchitti and Power!  Wheldon, by virtue of his 500 win, has a one time deal for the final race of the season.  He’s just signed to run full time again with the team who gave him his first Indy 500 win and championship.  His challenge is to come from dead last, and win for $5 million.

All the while, Franchitti and Will Power battle for the title for the 2nd year in a row, however, disaster occurs just a few laps into the race.  Tony Kanaan (Wheldon’s best friend) leads the race which would soon be ended.  A massive fiery crash sends cars flying through the air, including title contender Power.  His race ends sitting in his destroyed car which came to rest facing Wheldon’s car.  Dan Wheldon lost his life in the accident. Wheldon had spent the whole year developing a car that could have saved his life, which was tragically taken while chasing the $5 million.  The race was called, and would not resume.  It ended with Dan’s best friend Tony in the lead, and his other best friend Franchitti winning the title.  However, none of that mattered; what started out as a day of excitement and anticipation ended in unthinkable…unreal… unbelievable tragedy. 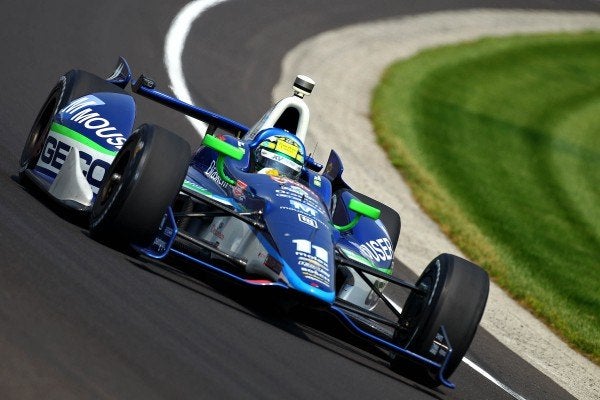 2012 saw the 500 end in epic fashion.  Tony Kanaan strives for the victory, to win in the memory of his best friend, racing in the cars he helped design.  Kanaan passed his good friend Franchitti with just a few laps left, then a yellow flag put the field under caution.  Gearing up for the final restart Kannan (1st) passed this message along to his friend Dario (2nd)…”Tell Dario we’re playing like old times…and we’re playing till the end.”…and, well this is what happened. 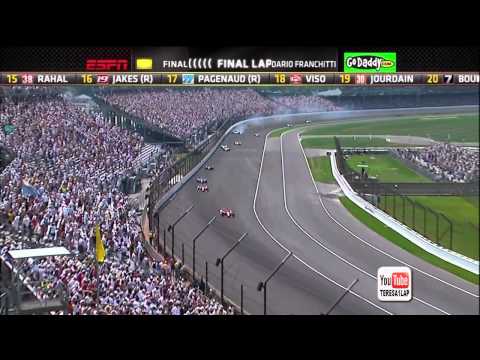 The 2012 championship came down to the final race AGAIN, with Will Power (AGAIN) battling, but this time against American driver Ryan Hunter-Reay.  Will and Ryan were racing side by side for the title when this happens!

Ryan Hunter-Reay wins the title, and Power comes up short, crashing out for the 3rd year in a row!

The racing is intense, the drivers are the fastest in the world, the risks are great, and the rewards even greater.  This is drama that cannot be manufactured. Will Tony Kanaan find a way to get his first elusive Indy 500 victory?  If he does I’m certain he would dedicate it to the memory of his best friend Dan Wheldon.  Can Will Power finally win the championship that’s been in his grasp for 3 years, and redeem himself on the ovals?  Helio Castroneves and Dario Franchitti each have 3 Indy wins…could this be the year one of them gets the 4th?  Only three men have ever done so!  Or can Marco Andretti lift the “Andretti Curse” by claiming his first 500 victory?  He came close in his rookie season…within yards actually!  His father Michael battled for this victory which eluded him for the entirety of his career despite dominating the race.   His Grandfather Mario Andretti only won it once…followed by years of close calls and bitter losses.  Maybe it will be a newcomer like the popular Josef Newgarden who just burst onto the scene…after all, everyone loves an underdog story!  The season begins as they race through the streets of St. Pete, FL in two weeks!  So what is your excuse for not watching IndyCar this year?