What Fenway Park is to baseball, Sebring International Raceway is to sports car racing. For all but two years since 1950, the Mobil 1 Twelve Hours of Sebring has hosted motorsport greatness. Beginning life as a former airfield converted to a race course, Sebring International Raceway’s premier sports car event has changed and hosted change in competition.

Earlier this past week, Sebring served as the venue for important news on North American sports car racing. The United SportsCar Series name was unveiled at the Sebring is the title of a unified American Le Mans Series and Grand Am Road Racing championship starting in 2014.

As the 2013 American Le Mans Series prepares its final sports car racing season, it opens at the historic Sebring track. Winning during 60 previous runnings of the race includes motorsport legends like Juan Manuel Fangio, Dan Gurney, Mario Andretti and A.J. Foyt. When the green flag fell for the 61st edition of the Mobil 1 Twelve Hours of Sebring, 42 cars contained drivers wanting to establish their legacy.

In effect, the only race organization capable of beating Audi Sport Team Joest is the team itself. In the 2013 Mobil 1 Twelve Hours of Sebring, that simply would not happen to the indomitable team. Distracted by a penalty to the #2 Audi R18 e-tron quattro for avoidable contact with another race car and a concern for the undertray of the #1 car, the race would be a 1-2 finish.

The #1 Audi R18 e-tron quattro driven by Marcel Fassler, Benoit Treluyer and Oliver Jarvis would be the winning team who took the Mobil 1 Twelve Hours of Sebring for an 11th time overall. While the Audi R8 Grand Am car will likely for a fixture in the 2014 United SportsCar Series, this Sebring race was seen as Audi’s last attempt at overall victory. The two Audi R18 e-tron quattro prototype were just 7.68 seconds apart crossing the Sebring International Raceway finish line. The Muscle Milk #6 HPD ARX-03c car finished third in P1 five laps behind the Audi race car. As for the P1 class in general, the top-five competitors would finish in the same position they started at Sebring.

Despite the common knowledge 12 hours at the Sebring International Raceway is accepted as a torture test, the 2013 edition of the sports car classic had only four official retirements. Still one of the most radical designs currently on the racetrack, the Deltawing race car made a very short class debut in the P1 category.

The #0 DeltaWing chassis lasted just 10 laps in the 2013 Twelve Hours of Sebring event. The veteran Dyson Racing team also suffered an early retirement when a host of electrical failures plagued their Lola-Mazda machine.

The remaining two vehicles classified as not running at end of the Sebring race were GT class vehicles. The most dramatic GT retirement occurred on-track during the eighth hour of the 2013 Twelve Hours of Sebring. After a brushing with the #4 Chevrolet Corvette C6R ZR1 driven at the time by Richard Westbrook, Bill Sweedler lost control of his damaged #23 Ferrari F458 crashing hard into the wall. 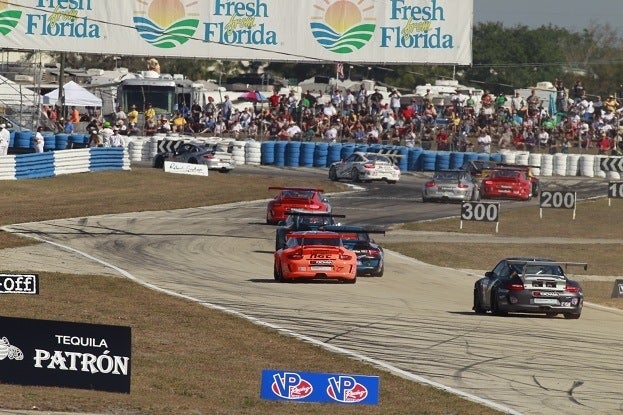 While the top tier prototype category for the 2013 American Le Mans Series opened with little excitement, the other classes of the Twelve Hours of Sebring provided an ample frenzy. In the popular GT class, Chevrolet Corvette C6Rs, Porsche 991 GT3 RSR and Ferrari F458 Italia waged war at the front. The new BMW Z4 GTE, Aston Martin Vantage V8 and SRT Viper machines were added good measure to the production-based category for Sebring and the rest of the 2013 American Le Mans Series season.

In the first Mobil 1 Twelve Hours of Sebring race for the new cars, two of the vehicles came across the line respectfully. The #56 BMW Z4 GTE of Rahal Letterman Lanigan Racing finished fourth in GT class while the highest finishing SRT Viper GTS-R came home four laps off the pace in fifth place. The #97 Aston Martin Vantage V8 was the highest placed of the British luxury car brand registering 8th in class.

In the race for GT honours, the #4 Chevrolet Corvette C6R ZR1 pulled off a stunning victory over the #62 Ferrari F458 Italia. Overcoming challenges that included the penalty for contact, the #4 Corvette Racing team’s margin of victory in the GT class was a mere 2.7 seconds.

Oliver Gavin, Tom Milner and Richard Westbrook celebrated their first class win at Sebring since 2009. The win is also significant during the 60th year anniversary of the Chevrolet Corvette sports car.

The #551 Level 5 Motorsport HPD ARX-03b (a car derived from Acura’s sports car involvement during the late 2000s) won the P2 class at the Mobil 1 Twelve Hours of Sebring. Finishing a lap ahead of their teammate vehicle, the #551 car was driven by Scott Tucker, Marino Franchitti and Ryan Briscoe. In the third and final prototype category, the 12-hour race was a duel between two PC (Prototype Challenge) teams.

The Performance Tech Motorsports #500 Visit Florida-sponsored car was also part of the PC class lead battle during the Sebring race but ended the race a lap behind the main battle. The #22 Porsche of Cooper MacNeil, Jeroen Bleekemolen and Dion von Moltke took victory in the GTC class. A category consisting entirely of Porsche 911 GT3 Cup vehicles, this will be the final Mobil 1 Twelve Hours of Sebring race for GTC competition at the track. However, the Porsche 911 GT3 Cup cars may be eligible for the new GT Daytona class under the United SportsCar Series.