Since the late 1980s, Ferrari has ventured up the highest plateaus of racing-inspired engineering and design with a selection of wildly powerful, limited edition production vehicles. First the Ferrari F40, than the F50 and most recently the Enzo supercar were solely purposed to elevate the Italian sport car maker’s already exemplary performance reputation. More than a decade after the Ferrari Enzo became the go-to poster child for near perfection in motoring, the successor debuts at the 2013 Geneva Motor Show. Ferrari’s new name in super high-performance is LaFerrari.

Reflecting immediately on the model name, LaFerrari comes off as a little unimaginative or confusing. Are we supposed to call it the Ferrari LaFerrari or just the LaFerrari? Combining the company name with “la” (recognized in the Italian as a feminine use for “the”), this latest supercar is described as essence of Ferrari’s present and future moving forward. “We chose to call this model LaFerrari because it is the maximum expression of what defines our company- excellence.” said Ferrari’s President Luca di Montezemolo. Ferrari’s new LaFerrari will attempt to stir debate along admirers inquiring does the brand makes the car or does the car make the brand.

In the same fashion that the Lamborghini Veneno (another 2013 Geneva Motor Show premiere) took lessons of their recent vehicles like the Aventador to another level, Ferrari has evolved their design and construction expertise in creating the LaFerrari. A shape tuned with computer fluid dynamic programs and a Formula 1 wind tunnel, the LaFerrari supercar has still evolved into a pure Ferrari within the confides. Created in-house by a team led by Flavio Manzoni, the newest Ferrari supercar accepts modern design practice and reconnects with the brand’s sport prototype cars of the 1960s. Cues from the 458 Italia and the F12berlinetta are apparent in the headlamps, front air intake and through the side glass detail. Outer mirror pods are pushed far from the beautifully contoured body to not significantly obstruct aerodynamics of the LaFerrari. Featuring active aerodynamics, the front and rear diffuser as well as a spoiler can be augmented in real time to proper match the LaFerrari’s dynamics. Classic styling attributes such as the greenhouse area and the hood outlet are reminiscent of the fantastic Ferrari 330 P4 that won the 1967 24 Hours of Daytona event. 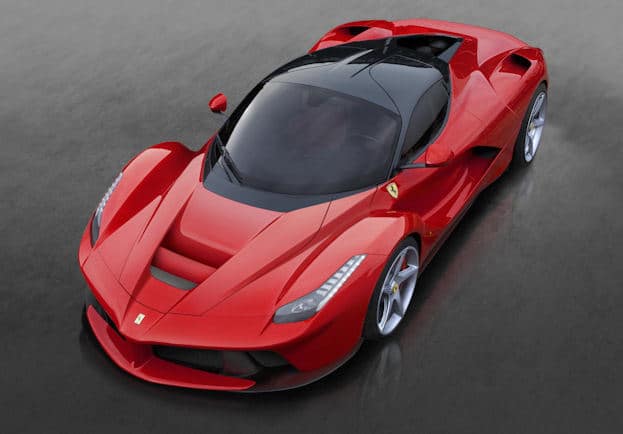 Technologically, the LaFerrari becomes a monumental creation. The first Ferrari production vehicle to incorporate their HY-KERS hybrid technology, the combination of a gasoline engine and two electric motors delivers an efficiency boost over traditional supercar performance. Not only reduce tailpipe emissions, HY-KERS is configured to enhance all-around power from the LaFerrari’s V12 engine. Supplying bulk of the supercar’s performance is an 800 CV (789 horsepower) 6.3 liter V12 powerplant mounted behind the cockpit of the LaFerrari. Weighing an impressively light 60 kilograms (132 pounds) when accounting for all components including the battery pack, the electrical drive system co-developed with Magneti Marelli produces an additional 120 kilowatts through the HY-KERS powertrain. Collectively, an enormously large 952 horsepower propels the LaFerrari supercar. Introducing the HY-KERS technology on the LaFerrari, Ferrari defines the powertrain is something that will become a greater factor in the development of future Ferrari models. 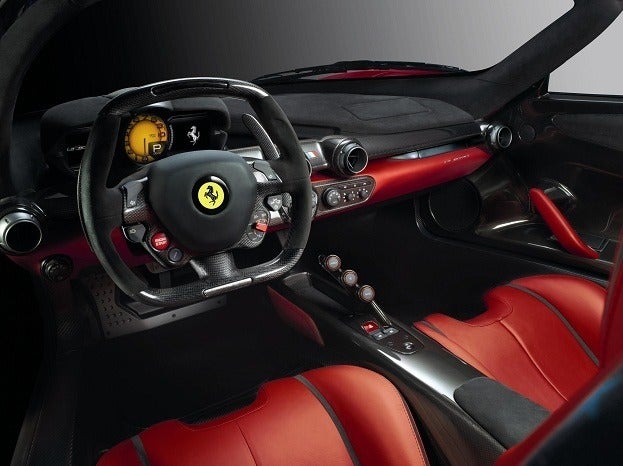 Channeling power through a dual-clutch transmission, engine performance to the Pirelli tires is spectacular. Less than 3 seconds after applying the supercar’s accelerator, the LaFerrari launches from a standstill to 62 miles per hour. Following 15 seconds of constant straight-line power, a driver is taken to 186 miles per hour on route to top speed appraised at 350 kilometers per hour (roughly 217.5 miles per hour). Besides speed going straight, over sixty years of sports car and Formula 1 racing expertise has gone into making the LaFerrari a superior track performer. On Ferrari’s Fiorano circuit, Fernando Alonso rode the LaFerrari around the 1.862-mile course in 1 minute and 20 seconds for a new production car lap time record.

Upward-opening doors invite a driver and a passenger into the LaFerrari’s performance-optimized cabin consisting heavily of carbon fiber material. Considering primarily the vehicle‘s center of gravity as well as the driver, the interior is clearly an office space devoted to the pursuit of speed. Consulting with current Ferrari Formula 1 racing pilots Fernando Alonso and Felipe Massa, the driver’s position inside the LaFerrari is fixed for prime efficiency. Near identical to Ferrari’s F138 Formula 1 car, many of the vehicle controls are located on the steering wheel. Paddle-style gear selectors are another ergonomic touch assuring the LaFerrari will be handled with both hands constantly on the steering wheel.

Like the ultra-high performance Ferrari supercars that came before, the LaFerrari will be a limited production product. With 499 examples of the LaFerrari planned, pricing details are being withheld for the meantime preserving the dream car as a dream for almost everyone.