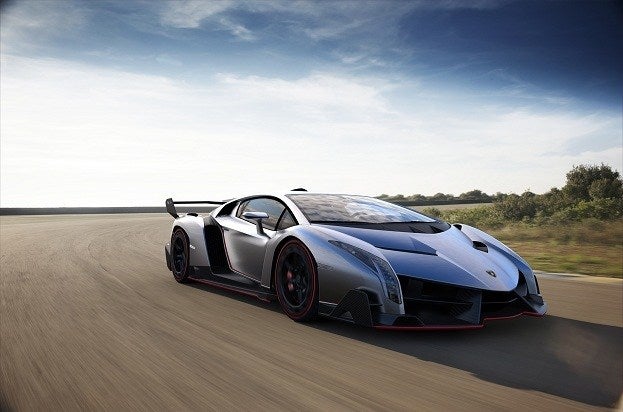 Like marriages, milestone anniversaries for auto companies can be celebrated in one of two ways. Sometimes (sadly) it is disregarded. Such was the case with the North American arm of Toyota transfer through their 50th anniversary of sales in 2007. Ford Motor Company will likely engage in promoting the 50th year of the Ford Mustang in 2014 but the 25th year of the Taurus sedan barely received a mention in 2010 and 2011. Fortunately, it is a relief to automotive fans numerous automakers regard their anniversaries with deeper consideration than most married men bid to their own partnership. Celebrating its 50th year of building desirable high-performance sports cars, Lamborghini has figured no matter way to commemorate the occasion with a special supercar. Set for exhibition at the 2013 Geneva Motor Show, the highly limited Veneno production supercar is something only an occasion such as fifty years in business could realize.

An Italian sports car company, Lamborghini has a history of showing plenty of friendship to Spain. Starting with the fighting bull badge adorning all of the Italian supercars since founder Ferruccio Lamborghini commissioned the 350 GTV, the latest Aventador name is borrowed from the Spanish language word for fan. The Lamborghini Veneno is yet another vehicle demonstrating the intertwined cultural between two countries. The translation of the word “venom” in the Spanish tongue, Veneno is an appropriate name for the aggressive motor vehicle. Comprised of carbon fiber-reinforced panels such as the automakers Forged Composite and CarbonSkin, the Lamborghini Veneno is one of the leanest yet meanest supercars ever to exist. 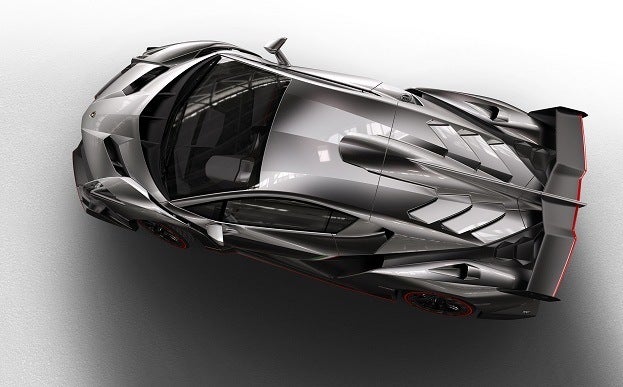 Utilizing some of the Aventador LP-700-4’s qualities including the 6.5 liter V12 powerplant and structural technology, the Lamborghini Veneno explores the next step of lightweight, high-horsepower supercar extravagance. Appearing just like a modern prototype sports car that successfully completed the 24 Hours of Le Mans, the Lamborghini Veneno is an aerodynamically perfected shape for overall performance. Shaped entirely with carbon fiber to promote superior straight-line speed, the focus on maintaining maximum aerodynamic downforce means the airflow around the Lamborghini Veneno supercar is managed like a visual symphony. The Veneno is another extension on the engineering inspiration displayed years ago on the Lamborghini Sesto Elemento concept car.

All Lamborghini Veneno production models will feature a grey metallic exterior heightened in appearance by black carbon fiber. Designed to a Y theme, the attractive yet functional contouring has influenced the headlamps, taillights and engine cooling vent layout. The six engine cooling openings are configured to leave a central tail on the Lamborghini Veneno says improves stability and braking. An adjustable rear wing found on the back of the Lamborghini Veneno insures the rear end remains firmly planted so the tires on 20-inch front and 21-inch rear alloy wheels can take care of business.

Mounted on a monocoque constructed using carbon-fiber reinforced polymers and aluminum sub frames, the Lamborghini Veneno enjoys a strong but light structure similar to the method used for the Aventador. With the Veneno, Lamborghini engineers have found ways to shave more weight from the process of building a 200-plus mile per hour supercar. A vehicle reportedly weighing just 1,450 kilograms (3,190 pounds), the Lamborghini Veneno is lighter than several mid-sized passenger cars including the Kia Optima and Honda Accord. 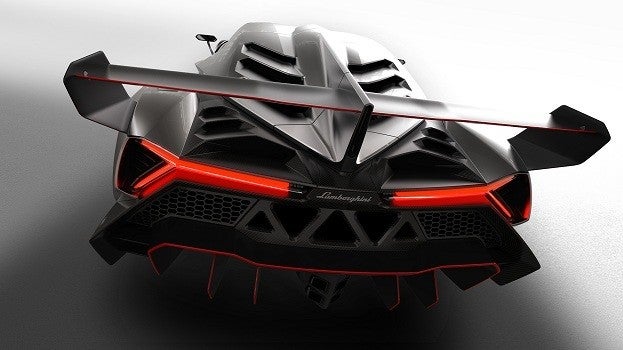 With a minimized weight, the super rare supercar Lamborghini receives a 750-horsepower version of the 6.5 liter V12 engine to complete the performance equation. The Lamborghini Veneno boasts a pounds per horsepower ratio of 4.25 instantly promising the supercar has a ferocious bite. The 7-speed ISR manual transmission and a permanent all-wheel drivetrain courts engine power in pursuit of impressive speed potential. Accelerating from 0 to 60 miles per hour in just 2.8 seconds, the 750-horsepower Lamborghini Veneno can streak to a top speed of 221 miles per hour.

Configured with a typical two-seat supercar interior layout, the race car-inspired engineering exercised on the Lamborghini Veneno stylishly sells the vehicle’s performance. Lamborghini’s Forged Composite material goes into the creation of lightweight seating while a woven carbon fiber material called CarbonSkin upholsters most of the interior surfaces. In the instrument panel, the driver of the Lamborghini Veneno will note a full information center including unique data from a G-meter. 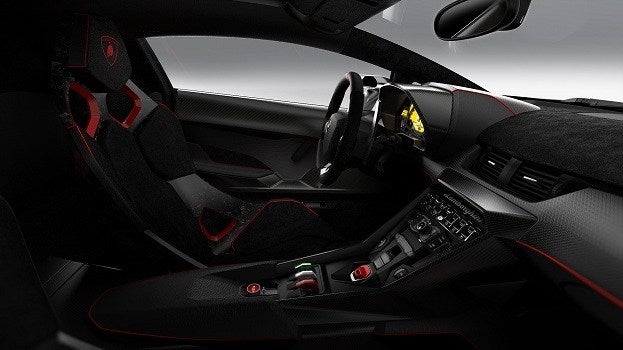 A production run limited to only three cars at a price of three million Euros including tax (3.9 million US dollars), the Lamborghini Veneno supercars will be defined by individualized accent colouring. Found on the lower part of the vehicle, the rear wing as well as inside the Lamborghini’s cabin, red, green and white (colours of the Italian flag) will insure that each Veneno is a unique mechanical creature.

With the prototype test car number 0 being shown at the 2013 Geneva Motor Show, the three production Lamborghini Veneno will be produced later in the year. By the way, those three vehicles have already been claimed.