From Track to Street (or Vice Versa): 2014 Chevrolet SS Sedan 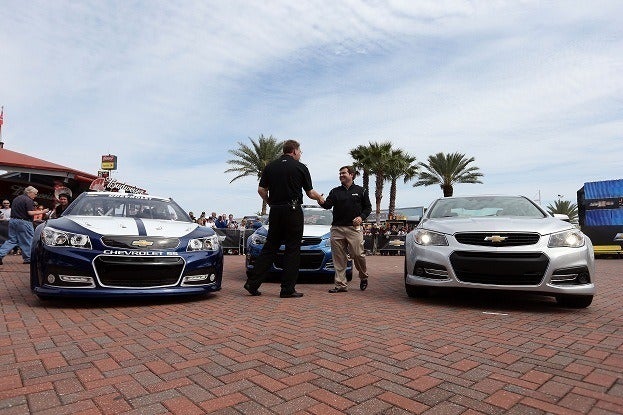 It is a rare case when automakers introduce a racing version of a vehicle prior to the production model. One of those isolated instances occurred in November when Chevrolet revealed their NASCAR Sprint Cup Series challenger for 2013 and beyond. In the guise of purpose-built stock car trim decorated with unique team sponsorship and graphics, the Chevrolet SS provides promise of a rear-wheel drive specialty sedan based on the Australian brand Holden’s VF Commodore. As the 2013 NASCAR Sprint Cup Series ramps up with the invitational Sprint Unlimited event on the super-fast Daytona International Speedway, the street variant of the SS sedan made its first official appearance serving as pace car for the pre-season event.

Delivering on promises, a rear-wheel drive, V-8 powered Chevrolet SS is coming to life as a full-sized sports sedan. A 2014 model year vehicle, Chevrolet’s first time in using their historic ‘SS’ badge as a stand-alone product borrows a chapter from auto racing during the 1960s and early 1970s when auto manufacturer tailor-built automobiles for specific motorsports activities. As the Chevrolet Impala (the nameplate that had been most recently exercised from 2007 to 2012 on the NASCAR Sprint Cup Series) was recently awarded an upscale persona departing from motorsport involvement, the need to furnish the bowtie wearing members of stock car auto racing with a strong vehicle meant acquiring something new for the Chevrolet line-up replacing the manufacturer championship winning entry of 2012. Finding a suitable replacement, the 2014 Chevrolet SS goes where no other production model from the General Motors division had ventured for 17 years. A four-door sedan based on a rear wheel drive combined with a V-8 engine had not been attempted since the limited edition Chevrolet Impala SS sold from 1994 to 1996.

It’s a bit hard to get too enthusiastic simply by the looks of the four-door Chevrolet SS. The performance sedan retains much of the exterior aesthetics of sister cars the Holden Commodore or Caprice PPV. Treading on a trend set by Audi and lately Jaguar, the Chevrolet SS boasts the usage of aluminum for the vehicle’s hood and deck lid for a weight savings of 30 percent compared to components created by steel. The front end is distinctively Chevrolet in theme with a notable “power bulge“ contoured into the hood. As defined prominently on the side of the Chevrolet SS Sprint Cup car, Corvette-like, non-functional duct detailing leaves an understanding that like vehicle is built for performance. Accomplishing a sports sedan presentation, Bridgestone tires surround 19-inch forged aluminum wheels while a set of ventilated Brembo brakes provide forceful stopping abilities.

Borrowing the LS3 V-8 engine from the Chevrolet Camaro SS and the 2013 Corvette, 6.2 liter powerplant pushing the 2014 Chevrolet SS sedan will have a maximum output of 415 horsepower and 415 pounds-feet of torque. A six-speed automatic transmission is combined with the 415-horsepower LS3 V-8 engine that when combined, sends the Chevrolet SS from 0 to 60 miles per hour in around five seconds. Prepared for impressive straight line performance, Chevrolet has worked hard to achieved a near 50/50 weight distribution is solidly transmitted with the rear wheels with support from General Motor’s StabiliTrak and electric power steering. 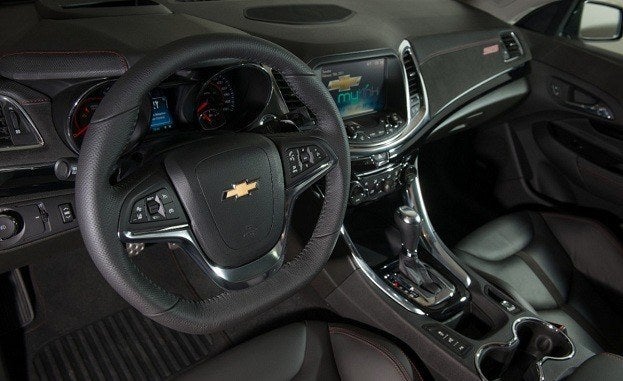 Set to become a premium vehicle offering, Chevrolet will load the SS sedan with some particularly high-end, high-tech appointments. Push button start, colour head-up display, lane departure warning and a Bose nine-speaker audio system will be found standard in all 2014 Chevrolet SS vehicles. Chevrolet MyLink with navigation system can be operated from the in-dashboard touch screen. In addition to the many advanced electronic standard features, another piece of technology will be debuting on the 2014 SS sedan. Designed to aid drivers in negotiating into rear or parallel parking spaces, Chevrolet’s all-new Automatic Parking Assist controls steering input while the motorist regulates speed and transmission shifts.

Explained previously as a limited production vehicle by General Motors, the 2014 Chevrolet SS is a complement to the bowtie brand’s two-door high performance cars. While the retail market will have to wait until fall of 2013 to get behind the wheel of an SS sedan, more attention can be paid to the NASCAR Sprint Cup Series starting with the action at Daytona.