Blue and white stripes on a Viper – hey this is a throwback. If you’re a Dodge Viper aficionado you’ll recognize these as the launch colors used for the past two generations of Viper coupes. With the 2013 SRT Viper being a continuation of what began back in 1996, SRT is keeping with tradition.

The result is the top-line Viper GTS Launch Edition being launched at the Pebble Beach Concours d’Elegance. “Designed with Viper loyalists in mind, the 2013 SRT Viper GTS Launch Edition model brings back the classic paint schemes that have adorned all previous Viper coupe launches to help us celebrate the return of our brand’s flagship performance machine to the supercar market,” says Ralph Gilles, President and Chief Executive Officer of Chrysler’s Street and Racing Technology Brand. 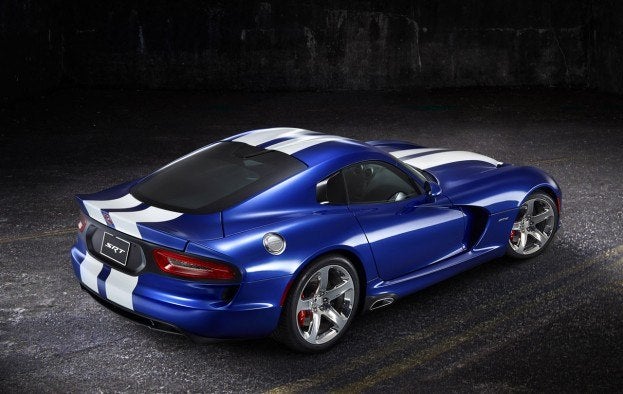 The exact color combination is dubbed GTS Blue and Blue White, and the car features the “Stryker” hood badge with a blue background. That badged was named by Viper fans at a 2010 Viper Owners Invitational Event in Salt Lake City, Utah. “Stryker” is the third variant of the Viper snake logo, following “Sneaky Pete” and “Fang.”.

Inside, the Viper GTS Launch Edition gets the prerequisite numbered dash plaque featuring its build number, along with a unique steering wheel. Seats will be covered in Black Laguna leather.

The car’s five-spoke aluminum wheels even are patterned after the Launch Editions that came before it. The Viper’s 8.4-liter V-10 remains unchanged, pumping out 640 horsepower and 600 foot pounds of naturally-aspirated torque.

You can bet the Launch Edition will cost a good bit more than the standard model, along with selling out quickly. Chrysler hasn’t revealed how many will be produced. As for us, we’d probably take our Viper in a different color combination than this one. However, all we have right now are computer generated press shots, which don’t tend to flatter.