If you are looking for a mid-size crossover, the field is crowded, but the newly-redesigned Toyota RAV4 should be on the list. The new fourth generation model has been totally reborn inside and out. This week we’re testing the top-of-the-lineup RAV4 Limited AWD variant ($28,410). We recently reviewed the XLE AWD model here so we won’t re-cover the general attributes of the new crossover.

If you are looking for more luxury in your RAV4, this would be the main reason to check out the Limited model. It will come at a price premium of around $5,000, but you’ll get a lot of extras inside the cabin to make it more comfortable. The initial impressions upon first entering the cabin of this Limited tester is a feeling of better quality materials and increased comfort over the XLE. The RAV4 Limited adds SofTex to the seating surfaces and they are also sportier than the LE and XLE models. The SofTex is a leather substitute that adds a bunch more luxury to the newly-designed cabin. It isn’t like leather in a Lexus, but it feels much nicer than the standard cloth upholstery. The Softex material continues on the armrest and center console.

Other upgrades to the interior of the more upscale Limited include a telescoping steering wheel that is wrapped in real leather. In the mid-range XLE, the steering wheel feels flimsy and cheap, making the Limited another worthwhile step if you can reach that far. The push button start on the Limited model is also a nice additional touch, and the second row seating is comfortable with decent legroom (37.2 inches).

The gear-shift lever on the Limited RAV4 is also covered in leather, but as in the XLE, the lower part of the center console is made of a lower quality plastic. But it’s easy to find just the right seating position in the upscale model. It comes with an eight-way power-adjustable driver’s seat with French stitching and sports bolstering. It definitely adds to the interior comfort. The front passenger seat also gets upgraded with a four-way power seat. 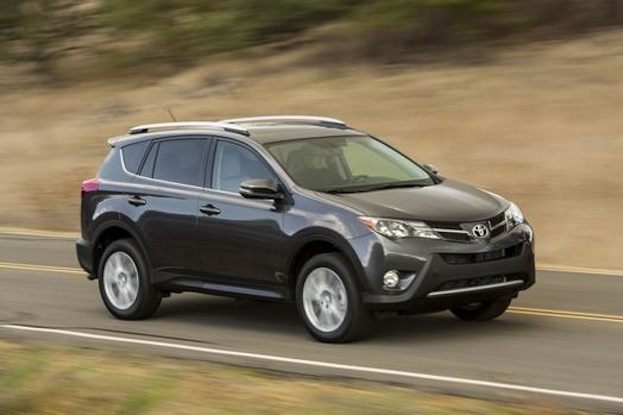 The added benefit of the RAV4 AWD is worth the cost. But this test driver lives in Colorado at altitude. But even for those who live at sea level, you will benefit greatly from the dynamic torque control AWD to aid with handling. The system manages torque transfer between the front and rear wheels via an electromagnetically controlled coupling.

We noticed a difference in the system improving handling when there was understeer as the crossover began to slide in the sharp corners near Evergreen. The power was transferred to the rear wheels and the mid-size SUV increased grip in the rear and corrected the understeer for better balance. Don’t expect a sporty driving experience, but the AWD helps when you need it.

We also adjusted the transmission setting between Eco, Normal and Sport mode that further allows the driver to adjust the driving feel. In Sport mode, we felt sharper gear shifts and throttle response while navigating tight curves west of Denver. Even though the 2013 RAV4 gets upgraded with MacPherson strut front suspension and a double-wishbone rear, it’s still not up to par with some of the competition.

But for most families who will use it to transport kids the soccer game and use it as grocery hauler, it will be a good form of transportation. And for families wanting a bunch more luxury than the base LE or mid-range XLE models, the 2013 RAV4 Limited top of the range SUV offers some nice features that improve spending lots of time inside.