The much anticipated all-new 2013 Subaru XV Crosstrek officially arrived in showrooms in late September and the new crossover is already a hit with buyers. Sales in Japan have already more than quadrupled the Japanese automakers initial sales goals. The XV, as it’s known around the globe, was expected to be popular with buyers, but it looks like it’s going to be a bigger hit than expected. Subaru hasn’t released U.S. sales figures, but we would imagine the new crossover is having similar success here in North America. The most fuel-efficient all-wheel-drive

One of the reason buyers are flocking to Subaru showrooms is because Subaru says the XV Crosstrek is “the most fuel-efficient all-wheel-drive crossover utility in America.” The 2013 Crosstrek gets a best-in-class 25/33 city/highway mpg when equipped with the CVT automatic. This manual transmission tester gets 23/30 mpg city/highway. That’s certainly good for the cute-ute, but real-world driving could yield less than spectacular results. As with any vehicle, it all depends how heavy the driver is on the gas. 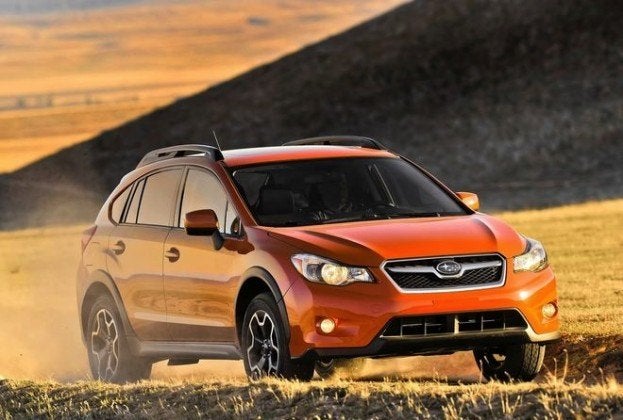 The all new crossover has already received two awards since September. The XV was awarded the IIHS 2012 Top Safety Pick, and Subaru is the only manufacturer with 2012 IIHS Top Safety Picks for its entire lineup. This is the third year running that Subaru has the distinction of earning the top safety pick from IIHS for every model in its lineup.

Subaru also announced that the XV Crosstrek, along with the Impreza 4-door Sedan and Sport 5-door series, have each won the “Good Design Award 2012” from the Japan Industrial Design Promotion (JDP). The XV is already receiving much praise and it’s only been in showrooms for two months.

A comfortable and functional cabin

The Subaru XV Crosstrek cabin is comfortable and fairy roomy. The standard cloth upholstery is durable and breathes well in the heat. For those who will take the XV off-road, the fabric will be perfect and easy to keep clean after a day on the trail. There are plenty of soft-touch surfaces for comfort, and lower panels are plastic and also designed for easy cleaning and scuff resistant for off-road use.  Heated front seats, heated exterior mirrors and windshield wiper/de-icer are standard on every XV. The rear seats offer plenty off legroom and all XV crossovers have seatbacks that fold nearly flat without having to remove the headrest. The rear area offers 22 cubic feet of cargo volume behind the back seat and 52 if  it’s folded down. The XV Crosstrek has increased ground clearance and makes for ease of entry and exit from the front and rear doors.

Even though the new Subaru XV Crosstrek is taller than the Impreza Outback that it effectively replaces, it rides like a car and you wouldn’t know it comes with an expanded capability chassis with 8.7 inches of ground clearance. The 17-inch alloy wheels, larger front brakes, larger fuel tank and special black wheel arch and rocker panel cladding are all additional features that make the new XV unique. The new features give the new crossover a “go-anywhere” attitude.

The new XV is built more for fuel-mileage than power, and the 148-hp 2-liter boxer engine felt a bit underpowered. Although it was being tested here in Colorado at altitude. Most drivers will find the power is adequate, but the XV is certainly not going to win any races. The high-revving 2.0-liter engine has good power as long as you keep the RPMs up. With the five-speed manual transmission, we found that the lower gears were often needed to keep the XV moving. A six-speed manual would be a benefit but would add considerably to the price. Look for Subaru to eventually add a turbo option, which would make the new XV a lot more fun to drive.

Compact crossover utility vehicles are among the fastest growing segments in the industry and Subaru is counting on attracting a younger demographic with its go-anywhere active lifestyle attitude. It’s already a big hit here in Colorado and is well-suited for winter climates. The new crossover already has a big appeal because of its fuel-efficiency and its ability to go anywhere. The price is competitive, and looks like Subaru has come up with another winner to go along with the new BRZ and Impreza sedan.

Buyers can go online and check out all the features and options and build their own XV Crosstrek. Subaru has launched an all-new 2013 Subaru XV Crosstrek Dynamic Brochure. It’s loaded with interactive tools and videos.