Hello modern classic – the 2013 SRT Viper is a sure fire hit. After a hiatus that began on July 1st, 2010 the Dodge – ahem – SRT Viper is returning this November. The Viper was kept under wraps up until its launch in April at the New York International Auto Show. Since then we’ve heard a lot about process – such as the stringent approval necessary to become an SRT dealer.

The Chrysler Group is serious about making sure the new Viper has a premium buying experience. Ahead of its launch, the company has released pricing information for the entire lineup, including the upmarket GTS. As the best Viper ever, the 2013 is fittingly also more expensive than ever before. The standard Viper starts at $97,395, not including a $1,995 (ouch, it is only from Michigan!) destination fee. 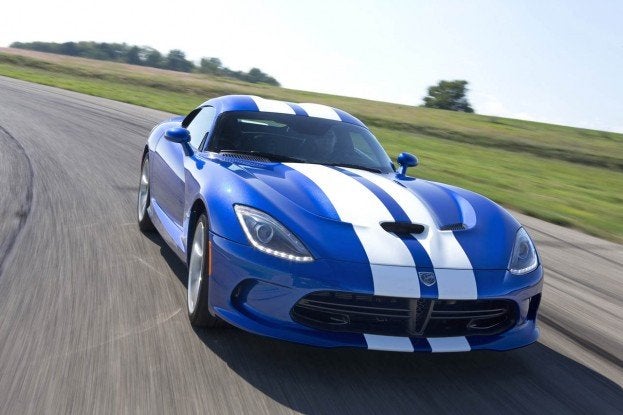 Moving up to the $120,395 GTS will set you back $23,000 The GTS includes a dual-mode active suspension system that can quickly adapt to road surfaces. Bilstein DampTronic Select shocks are used, and they offer settings for the street and track. The standard Viper will actually be the choice for hard-core purists, because the GTS adds on creature comforts.

It is aimed at attracting some buyers from Lamborghini and Porsche. The interior is a lot more luxurious and includes two-tone leather covered surfaces, power seats sourced from Ferrari, a Harmon/Kardon audi system, carbon timer tim elements and black graphite trim on the brake ducts and headlights. There is also a set of unique wheels. As far as we’re concerned, the GTS is the one to get. Along with the pricing information, Dodge has released a whole new set of images. They’re a lot better than the studio shots we’ve got before, and they’re in real life track situations. Check them out in the gallery below. The 2013 SRT Viper goes on sale this November.