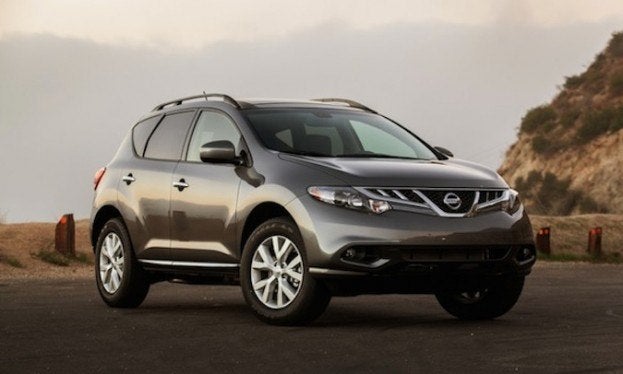 The mid-size Nissan Murano has quietly performed well since it was first introduced in the U.S. market as a 2003 model. The Murano was Nissan’s first crossover for North America and for 2013 it sees few changes from the previous model year. This week we’ll be testing the 2013 SV ($34,480) with the new Value Package and all-wheel-drive. In a segment that is loaded with choices, the Murano continues to stand out as a quality five passenger SUV. Its styling was originally thought of as radical, and as time goes on, the Murano’s looks still make it stand out from the crowd.

This Murano SV came with the new Value Package Nissan has added for 2013 SV models. It features a power liftgate, Bose audio system with 9 speakers plus dual subwoofers and Nissan Navigation system. The Value Package has a MSRP of $2,270. Nissan says it saves consumers $830 over the cost of items if purchased separately.  There are also two new exterior colors available on the new Murano, Midnight Garnet and Gun Metallic. 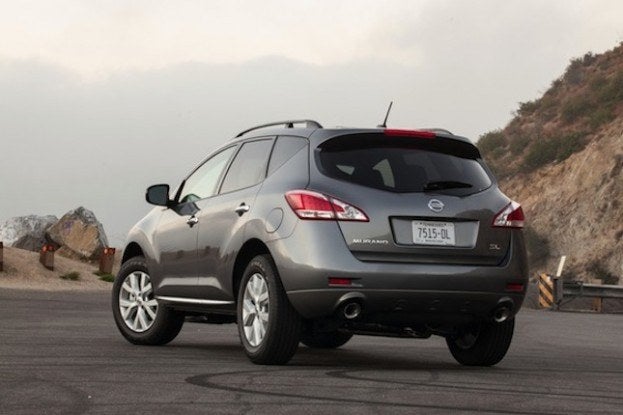 This Murano tester came with cloth seats and a black interior that looked good with the new Midnight Garnet exterior. The cabin feels larger than expected for a mid-size crossover and is attractively styled. The fit and finish feels like that of its more expensive relative, the upscale Infiniti FX. The Murano technology was easy to understand and operate, and this SV featured navigation and the streaming audio via Bluetooth. The 2013 Murano has seating for five adults and includes a backseat with ample head and legroom. For a long trip over the Holiday weekend, our passengers enjoyed the rear seatbacks that reclined for extra traveling comfort. The crossover features 31.6 cubic feet of cargo room behind the rear seats and when folded down, creates a nice flat load floor with 64 cubic feet of room. There was plenty of room for the luggage and cargo for five people. While the Murano doesn’t offer the most cargo space, the power liftgate made it easy to unload some large packages for my wife’s Black Friday shopping excursion.

The best CVT transmission in the industry

The 2013 Nissan Murano is available with only one engine, but the VQ-series 3.5-liter DOHC V6 is a good one. The DOHC engine has a healthy 260 horsepower and 240 lb-ft of torque that motivated the SUV well during our week in city and mountain driving near Denver. The V6 equipped Murano gets good fuel mileage and the EPA estimated fuel economy is 18 mpg city/24 mpg highway and 20 mpg combined with front-wheel drive and 18/23/20 with all-wheel drive.

The V6 is mated to an advanced Xtronic CVT that felt sporty and smooth in the week of diverse driving situations. Nissan has one of the best CVT’s of any automaker and it doesn’t have the annoying wind-up sound like other less effective transmissions. CVT’s have gotten a well-deserved poor reputation, but this CVT performs as well as any traditional automatic. This SV tester came with the available Intuitive All-Wheel Drive system that we didn’t get a chance to test out in the snow. But even with Denver’s unseasonably warm weather, the all-wheel-drive performed well on dry roads. It kept the mid-size crossover firmly planted and stable as we ran through tight corners in the mountains on Highway 73 near Evergreen.

The Murano has always been known for a more sporty driving experience than the competition, and this 2013 SV AWD didn’t disappoint. The Murano features a finely tuned suspension that gives it a sporty feel and more agile handling. This driver wasn’t afraid to push the Murano to limits where other SUV’s would fail to perform. It can be driven aggressively, but still offers a comfortable ride with the standard 18-inch wheels. The steering is precise and adds to the enjoyment of driving the new 2013 Murano.

With the large number of crossovers on the market, the 2013 Nissan Murano SV AWD stands out with its unique styling, efficient powertrain, utility and you won’t need a loan when fill up at the pump. The new Murano ranks up there with the best of them.