The Altima has been the volume sales leader for Nissan, so when it came time for the latest redesign, they took the task seriously.  Not only did they have some serious competition, they wanted to produce a vehicle that was a ‘class above’. So they benchmarked the class above – BMW, Audi, and Mercedes. 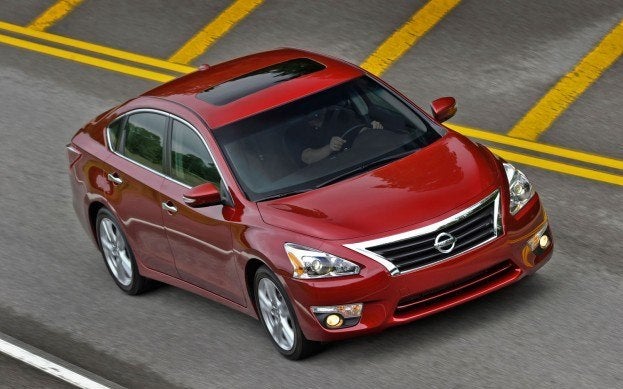 The 2013 Altima is all new from the ground up.  The exterior is now more upscale, appearing a little Infiniti-like in my opinion.  Chrome touches around the windows, grille, trunk lid, and chrome door handles all lend to the luxurious new appearance. 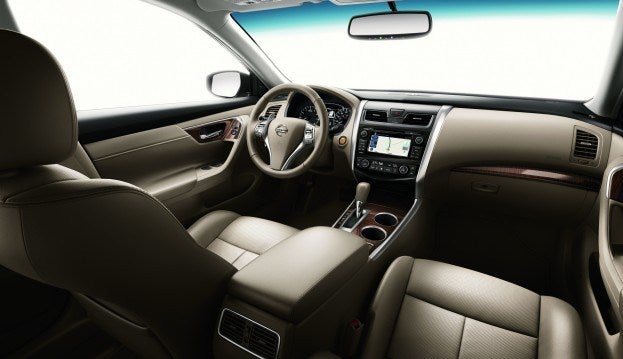 The interior has the same treatment. When first sitting in the new car, the first thing you notice is the increased feeling of luxury with high quality materials, excellent ergonomics and attention to detail.  Special attention was given to the front seats which Nissan calls an ‘anti-gravity’ seat.  Nissan had the seat from the current Altima, the seat from the new model, and a seat from the Hyundai Sonata available at the press event.  Their effort was worth it as the new Altima’s seat is much more comfortable compared to both other seats.

The Altima boasts a number of innovative features as options, among them a self-cleaning rear-view camera. That’s right, the camera has a sensor that when it determines it is dirty, sprays a couple drops of washer fluid from the car’s main reservoir and then dries it using its on-board air compressor.  The camera is used for blind-spot monitoring, lane departure warning, and moving object detection in addition to its regular rear view duties. The Altima also has auto-on/off headlights which turn on the lights when wipers are in use.  Standard technology includes a 4-inch driver information display that shows the car in 3-D between the gauges and displays Audio, Tire Pressure Monitoring, System Warnings, and Navigation information when equipped. Also standard on all models is Bluetooth streaming audio and hands-free phone.

One of the coolest features is what Nissan calls Easy-Fill Tire Alert.  This allows you to fill a car tire without a tire gauge and works as follows.  The driver information display shows you which tire is low.  Then you simply put air in the tire.  While the tire is filling, the hazard lights blink and when the tire is at optimum pressure, the horn honks once.  If you keep filling, it sounds a louder double honk. I sampled both the 4-cylinder and V-6 models in the mid-grade SV trim which Nissan says will be the volume trim level.  Both cars had cloth interior, power sunroof, and navigation – usually a feature only reserved for the highest trim level.  I drove the four-cylinder about 70 miles on two-lane country roads south of Nashville.  When I took a couple of the unfamiliar corners too fast, I was brought back in line by the Altima’s Active Understeer Control, which modulates the front brakes to reduce understeer.  The four-cylinder has plenty of power and the CVT makes good use of it.  Handling and ride were excellent with a nice blend of each.  The interior was quiet at speed with some tire noise from the low-rolling-resistance tires over pavement that was not smooth.

My drive back to Nashville was in the V-6.  This car was equipped the same as the four-cylinder model above, but the V-6 makes this car feel like it is in another class.  It is smooth and powerful and adds a more luxurious feel.  Paddle shifters add a touch of sport. To wrap up, in the competitively crammed mid-sized sedan category, the 2013 Nissan Altima will be one the best offerings in its class when it comes out mid-summer.  They sought to take the previous model to the next level and succeeded.