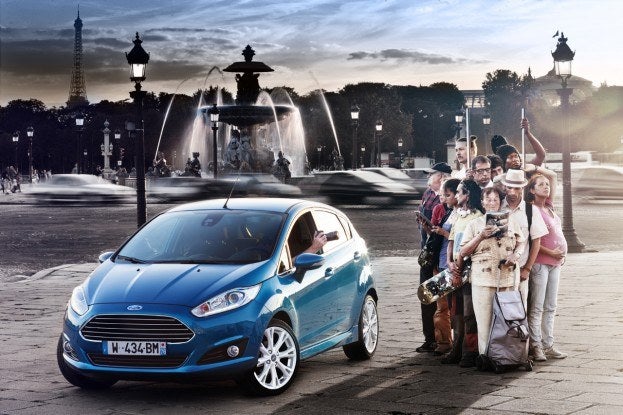 The current Ford Fiesta was introduced in the United States as a 2011 model, but elsewhere in the world it has been on sale since 2008. The car remains remarkably competitive thanks to a steady stream of updates. In the past, Ford would let successful models languish without freshening.

Today the company is mounting a vigorous effort to keep its product line updated. Bravo. There’s an auto show going on in Amsterdam, and Ford has taken the opportunity to introduce an updated 2013 Fiesta for the European market. It is being updated to adhere to the company’s “One Ford” world styling strategy. The one sold in the United States is a bit different up front than the European model due to crash test regulations. We believe the update was designed to meet both European and US crash test regulations – meaning they should hopefully look exactly the same. The update for 2013 is much welcomed, and it was previewed by the ST performance model that has already debuted. Like the 2013 Ford Fusion and Taurus, it features a large new trapezoidal grille that ditches the small slit on the current car.

The headlights have also been redesigned with LED elements, and they look much less cartoonish. We’ve never been big fans of the Fiesta’s front end. The 2013 rectifies the problems we had with it, featuring a much cleaner and more mature look. Ford calls it more sophisticated, and we agree. Big improvement.

As with any Ford upgrade, the Fiesta includes a host of new technologies like Active City Stop (similar to Volvo’s City Safety) that helps to avoid low-speed accidents. Only one detail about the engine lineup was revealed – that it would get three-cylinder EcoBoost power. More specifications are scheduled to be released in September at the Paris Motor Show. The reveal took place in Amsterdam though, which means those details will be for the European market. The U.S-specific car will likely be introduced at the Los Angeles International Auto Show this November.