In a country that really pioneered the bigger is better mantra, mini cars like the 2012 Fiat 500 can be a tough sell. The MINI has been one of the exceptions, with a lineup of models that has proliferated over its 10 year BMW-owned history in the United States.

Every once in a while a car will come along that captures people’s imaginations. They come in different shapes and sizes, and one of them in Europe has undoubtedly been Fiat’s little 500. After experiencing European success, the 500 came to the United States in 2011. The Fiat-Chrysler partnership enabled it’s arrival to happen quite easily. The 500 we get here is remarkably similar to the European original; receiving just a few tweaks and upgrades in a few key areas to satisfy American tastes. 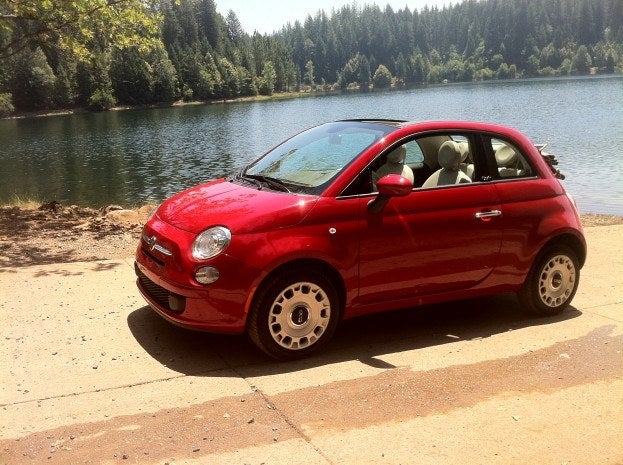 Last year Fiat set an ambitious sales target of 50,000 units. That overly-optimistic goal didn’t quite work out, but sales by American mini car standards were brisk. In 2012, Fiat is setting an even quicker pace thanks to heightened awareness, new special edition models and the Abarth variant. On paper, the standard Fiat 500 is far from an enthusiasts dream.

Let’s see – there is a 1.4-liter naturally-aspirated four-cylinder making just 101 horsepower, along with a nearly 2500-pound curb weight to lug around. The run to 60 mph is over the nine second mark. Cars are emotional objects though – sometimes they turn out to be more than an appraisal of their specifications list might indicate. With the Fiat 500, that was definitely the case.

The car is (unsurprisingly), very fun to drive in town. City settings are where the 500 shines, exhibiting easy maneuverability for darting around and squeezing into tight spaces. Pep in the 500’s first and second gears is decent as well. In higher gears, most of the 500’s acceleration oomph (if you can call it that…) comes when you keep it at the upper reaches of its power band.

More power would be welcomed. The upcoming 2013 Fiat 500 Turbo should strike a pitch perfect balance for many in this regard. The highway is where you can feel the 500’s design attributes – such as the tall, upright design – impact dynamics.

The 500 is obviously top-heavy and it doesn’t exactly inspire a lot of confidence during high-speed avoidance. That’s because the suspension is tuned on the soft side to preserve ride quality. It can feel a bit squishy during these situations, but it’s what you’d expect from a mini car in this class. There is an option for people who want to have a performance edge, and it’s called the Abarth. So if you’d like it to be a bit firmer, opt for the 500 Turbo or Abarth and voila….problem solved. The particular model we tested was the 500C, which means it has Fiat’s classic convertible top design. It’s a brilliant concept, providing the safety of having fixed A-,B- and C-pillars in place with an open top feel. The convertible added another element of fun to the 500 experience.

Cruising around downtown is a blast. Everywhere we went the 500 gained fans, and it was a hit among the younger crowd. Many different pictures were taken with friends and bystanders who posed by the car.

Despite being on the market for over a year, many are still very intrigued. Like the exterior, the interior has character in spades. Our red 500C had an optional retro cream-covered steering wheel and switchgear elements that matched the fabric soft top. The 500’s interior dates back a few years – it was first introduced in Europe for the 2007 model year.

The design has held up quite nicely since then. There are some elements of questionable quality – such as the Fisher Price HVAC controls – but overall it was a nice place to spend time. For a couple there’s a good amount of legroom, and noise is controlled well considering the soft top.

When it came time to hand back the keys, we were sad to see the 500 go. The Fiat 500 is a car you just can’t help but like. It isn’t particularly efficient or cheap, and it definitely isn’t fast or luxurious. But, it has an undeniable charm in spades. It made people smile, and that counts for a lot.

We’re glad to see models like the 500 out there brightening up the automotive landscape. Stay tuned for an Automoblog review of the 500 Abarth over the next couple of months.