When Chrysler inspired the modern minivan segment almost 30 years ago, the expectations from the vehicle were quite modest. With an audio cassette player serving as the most high-tech equipment, the minivan’s first appearance in late 1983 was dependent on offering superior space and ergonomics few other vehicles replicated at the time. As the automotive sector reaches the end of 2012, the one-time novelties of the first Dodge and Plymouth minivans are now properties of so many crossover vehicles as well as a few other minivans. Chrysler Group survived while Detroit Three rivals General Motors and Ford Motor Company had pulled the plug on the segment (though Ford will re-enter the family van marketplace with the Transit Connect Wagon for the 2014 model year).

Facing expensive foreign auto company choices from Toyota, Nissan and Honda, Chrysler products had remained appreciated in terms of a family’s pocketbook. The only under-$20,000 minivan sold in 2013, a top-model Dodge Grand Caravan costs $10,000 less than a Toyota Sienna. The Chrysler Town & Country has competed in the premium family hauler market but shares the Grand Caravan’s low operating cost. Chrysler innovative path in the minivan segment is attributed to 78 firsts for the vehicle class. Persevering as an innovative family-mover, Chrysler’s minivans for 2013 will have a high-tech edge far advanced from the cassette deck on the original vehicle. 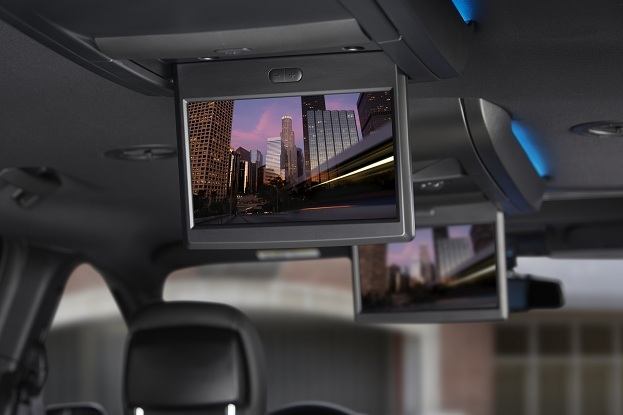 Adding Blu-Ray capability, the new-for-2013 entertainment ensemble for the Dodge Grand Caravan and Chrysler Town & Country minivans also includes other features favouring the tech-savvy family. With high-definition monitors in place, an HDMI port can allow popular video gaming systems to be played by backseat passengers in all visual glory. RCA input and a 12-volt outlet can be readily found for connecting devices. In regard to laptop computers, digital cameras, tablets and other electronic items using USB connections, two slots on the Blu-Ray enabled 2013 Chrysler minivans allow multimedia connectivity as well as charging. A 115-volt power inverter insures that the rear compartment has the capacity to operate as a moving family room.

While the package will definitely be on the Christmas list of children who ride for hours in the backseat while parents are searching for an 80s rock or news radio station, all that HD multimedia excitement could certainly cause a noisy situation as Nemo or the action from The Avengers movie pulsates the vehicle. Thanks to two wireless headphones, the sound is minimized.

The Blu-Ray capable rear seat HD entertainment system will be optional on SXT, Crew and R/T versions of the 2013 Dodge Grand Caravan. While extra on the Chrysler Town & Country Touring L model, the new entertainment array will be standard on the S and Limited trim levels in 2013.

Blu-Ray’s inclusion in automotive entertainment is coming on the advent of a home theater revolution. Online services such as Netflix and Apple iTunes has allowed many of us to evolve beyond the physical disc or storage device in order to consume popular media. In a year or two, the next major step will obviously be the first vehicle to incorporate a video on-demand system.