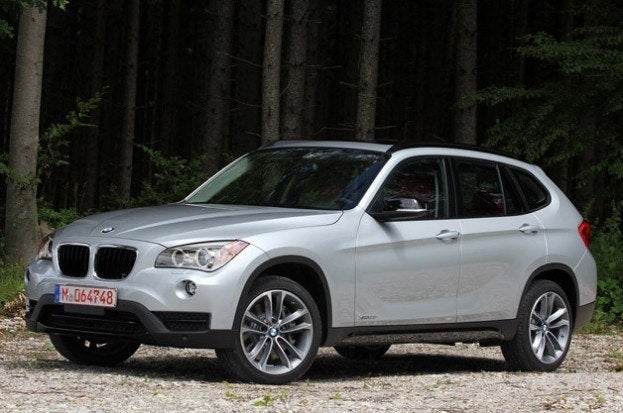 The 2013 BMW X1 is a new subcompact crossover SUV for the U.S. market and went on sale late last year. The X1 has been sold in Europe since 2009 but has just made it to the U.S. market. It’s even been offered in Canada, but the U.S. is just now getting it. BMW wasn’t sure how well the X1 would sell here, but the compact crossover market is growing here and BMW doesn’t want to miss out on the action. This week we’ll be testing a Glacier Silver Metallic top model xDrive35i.

When this X1 tester arrived, we noticed it looks very similar to the BMW X3. There are subtle refinements that are different but we needed to look close to pick them up. The U.S. version gets a more muscular front fascia and bumpers than the current European-market model. It’s the smallest model in the Bavarian automakers stable of SUVs and is about 5 inches shorter in height and 6.5 inches shorter in length than the X3.

Once we get inside, there are more obvious changes; the X1 gets a more upscale look with improved use of chrome and leatherette, with real leather as an option. The tester came with leather Nevada Coral Red seats that looked sporty and sharp. They contrast well with the black dash and contrasting black stitching. It was easy to find a comfortable driving position with the tilt/telescoping leather-wrapped steering wheel. Because of the center console iDrive knob, BMW added an extra removable stand-alone cupholder on the passenger side of the console which worked well to place my iPhone. 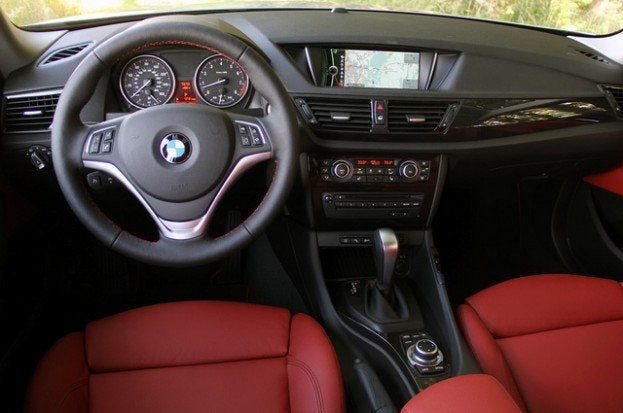 In the back there’s plenty of room for two average size adults and comes with an integrated drop-down console with two cupholders. The panoramic sunroof stretches all the way to back seat for open top viewing. The rear seats easily fold down flat for an extra large cargo area.  With the rear seats up, cargo capacity measures 14.8 cubic feet. Fold them down and space opens up to 47.7 cubes.

Power for the BMW X1 sDrive28i and all-wheel-drive BMW xDrive28i will come from a new turbocharged and direct-injected 2.0-liter four-cylinder making 240 horsepower. This same 2.0-liter turbocharged engine is found in the 2012 BMW Z4 sDrive28i and 2012 BMW 328i. This X1 xDrive35i, meanwhile, is powered by a 300-horsepower, turbocharged 3.0-liter inline-6. It comes mated to a six-speed Steptronic automatic. EPA estimates for fuel mileage is 18/27 city/highway. We’ve always been a huge fan of BMW’s inline-six cylinder engine that has won three straight Ward’s 10 Best Engine awards. The 300 horsepower turns the X1 into one fast compact SUV, and it’s a good match for the X1’s nimble character. It’s both smooth and powerful under all conditions. The six-speed automatic with ECO Pro mode helps get the most out of the 3.0-liter engine. It performed extremely well at altitude and had plenty of power passing slower cars going up I-70 towards Genesee. We even passed some automakers test mules that were clad in armor that use the mountain altitude to test their new drivetrains.

The 2013 X1 can be ordered with the optional M Sport suspension, but without it, the small crossover handled well in the corners. It offered a good balance between lower speed ride quality and excellent stability at high speeds. For an SUV, it still has BMW’s “designed for driving pleasure” sporty feel. The X1 has a low center of gravity and feels more agile and responsive than most small crossovers on the market, and for a family hauler, it’s undeniably impressive.

If you are looking for reliability, the X1 has just been awarded the class winner of the ADAC breakdown statistics in 2013. ADAC provides technical information as well as objective car buying advice and comprehensive information on safety aspects in Europe. 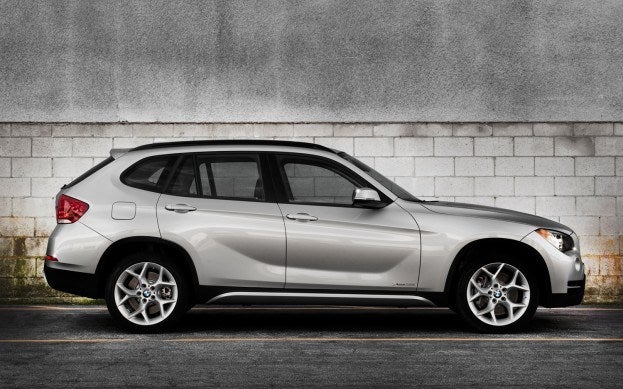 ADAC says the 2013 BMW X1 is for the lower middle class, the most reliable automobile on the market. This outstanding result was presented last week by the ADAC. Two years ago, the BMW 1 Series also won the breakdown statistics as the most reliable vehicle in the lower middle class. This can give U.S. buyers the confidence that the X1 won’t be costing them a fortune in maintenance costs.

If you’re looking for more nimble handling, easier maneuverability on city streets and a sporty luxury compact crossover, the X1 could be a good choice. It’s a small SUV that features many larger-vehicle features. The new 2013 BMW X1 is available now in U.S. showrooms for the first time. 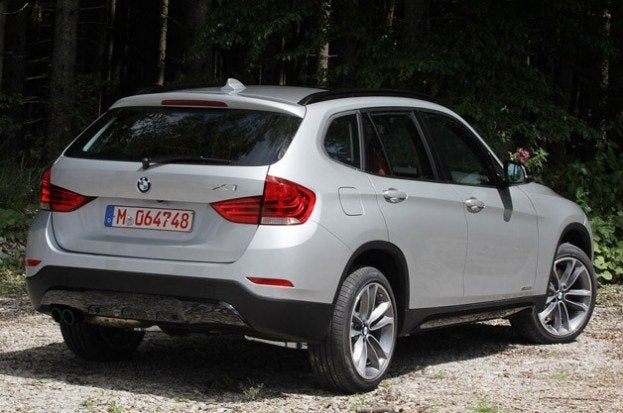