The most expensive Audi ever has landed. Say hello to the Audi R8 GT Spyder. The GT Spyder is the latest iteration of Audi’s hit R8. Since its introduction in 2006, Audi has steadily cranked up the heat – and the price tag – on the R8. 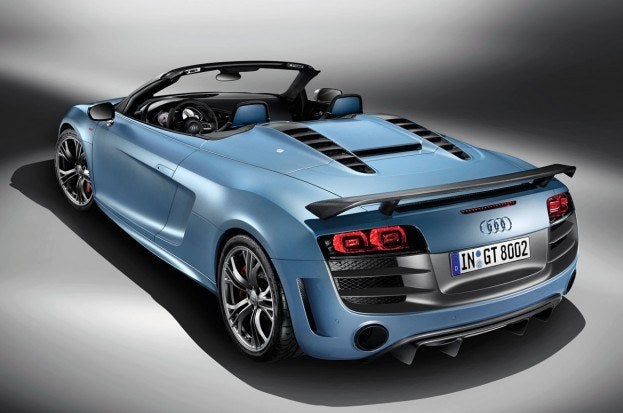 The Volkswagen Group isn’t afraid of internal competition. Besides, Audi seems to be the golden child anyway. Entering into this territory means the R8 is no longer exclusively a “budget exotic.” That has a positive effect on the Audi brand. A key difference is that the R8 GT Spyder is a limited run model, though – only 50 are destined for the United States and 333 (curious number) overall.

The R8 GT Spyder carries over the same changes as the R8 GT Coupe. That means a V-10 engine is putting out 560 horsepower and 393-pound feet of torque. That is up 35 hp over the standard V10. Coupled with a weight loss of 187 pounds (down from 220 pounds dropped by the coupe), performance is increased dramatically. A variety of measures was used to get to that level; carbon fiber components, lighter seats, windshield, carpeting – you name it. 0-62 mph arrives in 3.6 seconds on its way to a top speed of 197 mph.

The Spyder is slower than the coupe due to extra weight and reduced aerodynamic efficiency. The coupe hits 62 mph in 3.6 seconds with a top speed of 199 mph. The R8 GT Spyder will begin arriving at dealers anytime. No word on how many of the 50 examples are already spoken for.