Us automotive journalists are a hard to please bunch, aren’t we? Aston Martin produces some of those most beautiful grand tourers in the world, and we complain they aren’t “pushing the envelope.” Guilty as charged. At Concorso Villa d’Este in Italy, Aston showed off the AM 310 Concept that previewed the DBS replacement.

Following this, CAR spotted the vehicle in a trailer in England, wearing the Vanquish badge. With that, the cat was out of the bag – the DBS replacement would be called the Aston Martin Vanquish. The nameplate was last used in 2007 on the brand’s previous range topper, the Ford-developed Vanquish S. For 2013 the car is returning, once again doing duty as Aston’s most luxurious and expensive GT. Besides the limited edition One-77, of course. 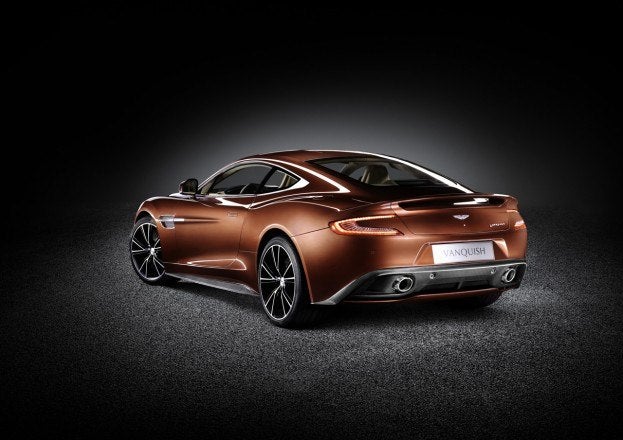 The new Vanquish takes some of the best cues from recent Astons, with a design up front similar to the Virage. Out back is the biggest change, with more curvaceous rear haunches and taillights clearly influenced by the One-77. The trunk features a spoiler that Aston refers to as an “Aero Duct.” They say, as a “triumph of both design and technical ability”, it serves an important functional purpose, counteracting lift at speed. Some people love it, some people think it looks cheap. You decide.

The Virage sees a 25 percent increase in torsional rigidity and the 6.0-liter V-12 has been upgraded to produce more power. The Vanquish makes 565 horsepower (up by 55) and 420 pound-feet of torque. 60 mph arrives in 4.1 seconds, with a top speed of 183 mph. Functionally the Vanquish has gotten a whopping 60 percent increase in trunk space. The car is able to be ordered as either a 2+2 or 2+0 (go figure) seater, and the sumptuous interior shows influences from the One-77 as well. The Vanquish comes as Aston Martin plans to celebrate its 100 years in business next year. Despite our protestations about doing something daring, the Vanquish is one beautiful coupe that serves as a fitting range-topper for Aston Martin. Check out our gallery below. We’re waiting on some better imagery to drop soon.