It hasn’t been easy for Alfa Romeo fans here in the United States. Time and time again the brand has announced its United States arrival, only to have it pushed back further and further. One product – the 8C Competizione – did make it to U.S for a limited time.

That car was supposed to lead a come back for the Alfa Romeo as a full-line automaker. However, that didn’t quite work out. In 2011 Alfa showed off the 4C concept at the Geneva Motor Show. The 4C was a small mid-engined roadster that followed in the design footsteps of the 8C.

Needless to say, it gained a lot of fans not only for its styling, but also for its rumored specifications list. The car is rumored to have only 200 horsepower – but there’s a big caveat. Lightweight construction and advanced materials are supposed to keep the 4C under 2000 pounds.

Now you get the point – lightweight, relatively inexpensive and extremely fast. Watch out Porsche! Most assumed that the 4C would be produced at some point, the question was when. Yesterday Alfa Romeo put out a teaser image announcing the car’s arrival in 2013. 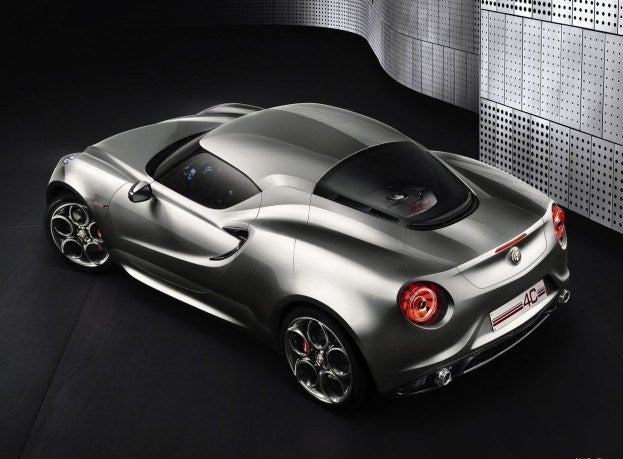 Finally, we have an official date. The question now turns to what show the car will be introduced at. We’ve heard that the North American International Auto Show is a possibility. But it seems more likely that Alfa would choose to launch the car at an international auto show such as the Geneva show in March 2013.

In actuality though, it could be at any point- for instance the Frankfurt show as late as September this year. Once again, a sports car is expected to lead the brand’s return to the market in a mainstream fashion. A BMW 3-Series fighter is in the works, along with a rear-wheel drive sedan. When the either of those cars will surface beats us.

The compact sedan has been delayed over and over by Fiat chief executive officer Sergio Marchionne. As always, stay tuned.