Finally! Ford Fiesta ST is Coming to America in 2013

When going to a party, is it typical for you to bring a bottle of wine? When attending a friend’s house to watch a movie, do you supply a few bags of potato chips? When hanging out at a barbecue, would you be the good guest who presented a six-pack of beer? Well, in the case of Ford, they provided one part of the world with something fun to their Fiesta in 2005. A pocket rocket launched in Europe, the Ford Fiesta ST subcompact car succeeded in raising the performance roof on the continent.

With the second-generation Fiesta ST model presented in conceptual form in 2011, sport tuner car fans could hear the maraca shakers once again. At March’s Geneva Motor Show, the production version of Ford Fiesta ST meant “party time” once again in Europe but left North American small car performance fans waiting for an invite. A model widely-anticipated for the United States since the Geneva Motor Show, Ford will officially debut the new Fiesta ST as a future North American addition within the party atmosphere of the 2012 Los Angeles Auto Show. 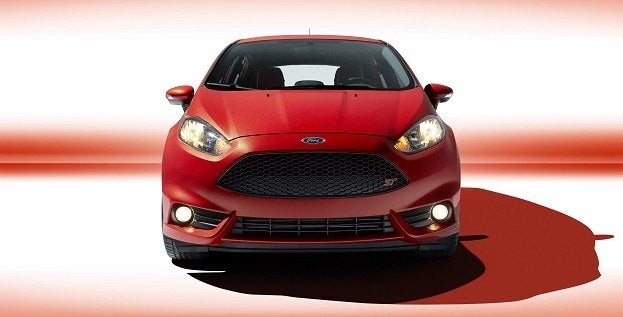 A spicier version of Ford’s compact vehicle that actually presents incredible spunk from the outset, the ST model of the Fiesta is a factory-made sport compact infused with enhanced style and emotion. The 2014 Ford Fiesta ST is first differentiated with a body kit complete for a front chin spoiler, rear roof spoiler and a rear diffuser. A unique black mesh front grille holds the ‘ST’ badging while 17-inch wheels adds greater effect to the high performance Ford Fiesta’s 15 millimeter (0.59-inch) lower ground clearance. As was expected, the United States will only see the five-door hatchback body style of the new Ford Fiesta ST. European markets will receive the choice of the five-door or a three-door version.

Despite only receiving the 2014 Ford Fiesta ST in the civility of the five-door model, the Ford EcoBoost engine could figuratively blow off every door. Packing the 1.6 liter EcoBoost four-cylinder engine, 197 horsepower roars out of the turbocharged and direct-injected powerplant. Reinforced with 214 foot-pounds of torque, the Fiesta ST drivetrain is configured for plenty of low-end grunt. More than 80 percent of the 2014 Ford Fiesta ST’s torque is placed at 1,600 RPMs. Beating out the Chevrolet Sonic RS, about the only mini compact vehicle capable of challenging the Fiesta ST in its power delivery department would be the MINI Cooper John Cooper Works. The driver of the Ford Fiesta ST has a firm harness on the 197 horsepower thanks a six-speed manual gearbox. Quicker steering along with a unique suspension accompanies the power produced by the Ford EcoBoost engine. Torque Vectoring and a three-mode electronic stability control system assists the Fiesta ST’s handling characteristics for opportune enjoyment. Performance and handling aside, fuel economy for the 2014 Fiesta ST is mentioned to reside at 34 miles per gallon (unclear if that is an average fuel consumption number or highway).

The interior of the 2014 Ford Fiesta ST is finished with an aggressive two-tone appearance accented with a leather-wrapped steering wheel and metallic pedals. Ford SYNC with a MyFord Touch 6.5-inch center console-mounted touch screen, an eight speaker premium sound system and ambient lighting is standard inside of the Ford Fiesta ST assuring a live, happening time is bound to take place between destinations. Definitely dressed to party, the 2014 Ford Fiesta ST follows the hyperactive, 256-horsepower Focus ST introduced for sale earlier this year. The price and release of the 2014 Fiesta ST will likely become clearer at the 2012 Los Angeles Auto Show presentation. Going from zero to two performance-oriented small cars in the North American lineup, Ford appears to have finally realized that there was a fair dose of unfairness shown over decades of European-only sport compact pageantry. Thankfully, it appears Ford has expanded the party list for the ST line.