The Success of S will Lead to an Excellent X In the last few weeks, several of the largest players in the automotive press game crowned a new champion. The Tesla Model S has gone from vaporware to victor in 2012, coincidentally the year in which the world was predicted to end. It turns out that it is only the beginning of the end of how we think of what makes a vehicle great , and what the future of style, performance, quality, and innovation can be.

We all know the stats by now, 0-60 in 4.4 seconds for the performance model, a range that can approach 300 miles with the optional long-range battery pack, and the drive in movie sized touch screen. But the car is greater than simple stats or the sum of its parts. The numerous awards in a way legitimizes what was considered a novelty item by some, and will doubtlessly cement many future orders on Tesla’s growing back order list. In some ways the Model S in now considered to be in the past, a milestone achieved on the road to greater things. If the Model S was the equivalent of having John Glenn orbiting the earth, then the upcoming Model X will be like the moon landing.

The Model X will make fully electric vehicles even more mainstream. The Model X is an SUV that will provide the space, comfort, and ride height that so many people love, but get heart palpitations every time gas prices jump by more that 10 cents a gallon. Will people run to their Chevy dealer and turn in their keys to their Suburban? The answer is most likely not for too many reasons to list here. However, Lexus, Infinity, BMW, Porsche, Audi, VW, Volvo, and others should be more than a bit concerned. 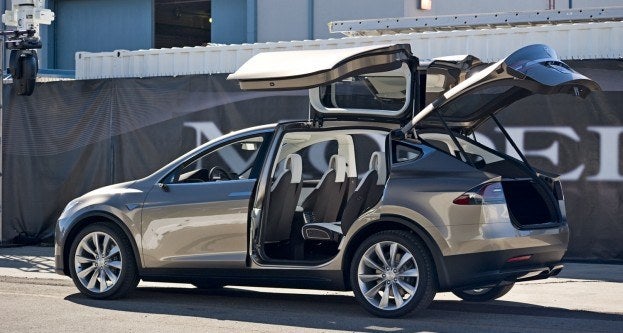 The Model X will have optional all wheel drive, sprint from 0-60 in under 5 seconds, have room for seven, handle like a sports car due to its low center of gravity, carry a large amount of cargo, and offer access to the rear seats without yoga like contortions thanks to some awesome gullwing like “falcon” doors. Styling is along the elegant and modern lines of the Model S and you will also get a world-class interior loaded with technology. Let’s see what else? Oh that’s right, I almost forgot, around 90 MPGe.

The cost is expected to stretch between $60,000 – $100,000 which places pressure on the main players in the high-end SUV segment. Deliveries begin in 2014 – will that also be the year of a Tesla SUV of the year award? We will have the answer to that question soon enough; we will also learn if Tesla can successfully sell and provide service for two full product lines at the same time. My take on it is that you should not underestimate Iron Man Elon Musk or Tesla’s talented team of engineers. Electric vehicles that are fast, practical, and cool are now here and they are winning.