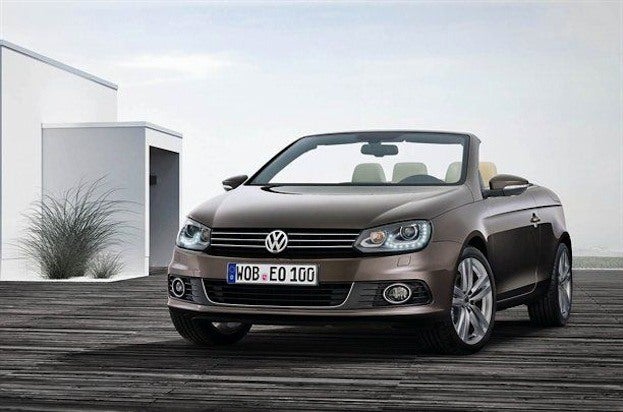 Since its introduction in 2006 as the successor to the Golf Cabriolet, the Volkswagen Eos has flown under the radar and hasn’t really gotten much recognition. But the Eos still offers practical daily transportation and sporty, top-down fun. The Eos is considered a subcompact, and its wheelbase and width are identical to Volkswagen’s GTI and Jetta models. The 2012 Volkswagen Eos has been updated with fresh styling, new interior appointments and more standard equipment.

Upon first glance of the 2012 VW Eos tester this week, it doesn’t look anything like a soft-top convertible. The top is made of glass and steel, rather than conventional fabric, and it looks like a sporty coupe until you look closer. For the 2012 model year, the Eos gets a few exterior styling changes in front and rear. The three-bar grille connects re-shaped light clusters and the two-part taillights are also re-shaped. The rear bumper is restyled with a single twin-tip exhaust pipe under the left side.

A multitude of standard features 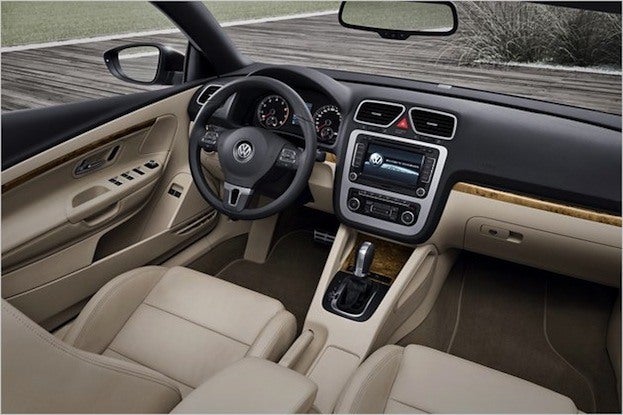 The interior is nicely finished and is what we’ve come to expect from Volkswagen. The materials used throughout the cabin are very good and the real strength of the VW Eos cabin is the fit and build quality. The only complaint about the cabin would be the lack of legroom in the back seat. There isn’t much room for more than a quick ride for an average size adult. But this is a subcompact and it’s not unusual for a convertible to have a back seat that’s just used for cargo.

But in the front it’s a different story. The front seats are large and spacious for a relatively small car, and comfortable. The sides of the seats are bolstered and keep the driver in place during aggressive driving. The heated seats work well and often got too warm with the top up. But they worked perfect for motoring around with the top down on a 50 degree day in Denver.

The top of the VW Eos is made of glass and steel, rather than conventional fabric, and the forward portion can be slid back and used like a wide sunroof. The top opens in 25 seconds with a push of a button and disappears into the trunk. It can be opened from inside or outside the car, and the Eos has a pop-up roll bar that automatically deploys behind the rear seats for added crash protection. With the top up, the Eos feels similar to a fixed-roof coupe without any rattles or wind noise. But it does have some minor visibility issues and feels a bit closed in. The windshield pillars are designed for safety and are a bit thick and the hard top’s rear pillars can block a driver’s over-shoulder view range. The driver definitely needs to double-check before changing lanes. But with the top down, the visibility issues disappear just like the hardtop.

The Eos comes equipped with a wind deflector that can be raised along the top edge of the windshield, and it works best when just the forward portion of the top is slid back, like a sunroof. With the top down, the driver might notice a bit more wobble or shimmy rippling through the body, particularly on rough roads.

The Volkswagen 2.0-liter turbo is a real strength for the VW brand. This four-cylinder is used in a lot of VW and Audi products because it’s so good. It’s small enough to deliver good fuel economy, but the turbo provides plenty of power for the small compact Eos. The 2.0-liter powerplant pumps out 200 horsepower and 207 pound-feet of acceleration-producing torque.

Initially, the gas pedal takes a little getting used to and can feel a bit touchy until the driver gets familiar with where the turbo kicks in. It can deliver a lot of power with very little effort from the driver’s foot to the pedal. The torque seems to come evenly at any speed, and is there whenever the driver needs it. At Denver’s high altitude, the 2.0-liter turbo had plenty of power for any driving situation. For the driver who likes to get the most performance out of their vehicle, the turbo is perfectly suited for more aggressive driving. The Eos pulls strong all the way up to its redline and moves the small convertible with considerable zest. Volkswagen says the 2012 Eos will sprint from 0-60 mph in under 8 seconds with a top speed of 148.

The 2012 Eos is only offered as an automatic, but the DSG works nicely. It’s responsive and works nicely with the 2.0-liter turbo. Shifts are quick and crisp, and there’s no hesitation with it trying to find the right gear. The six-speed DSG Tiptronic offers the ability to shift manually when the driver or conditions warrant a change.

Overall, the 2012 Volkwagen Eos Lux succeeds in its mission as an everyday driver and definitely fills the need as an all-season convertible. It’s comfortable for driver and passenger and is economical yet powerful enough to satisfy those looking for performance. With its smaller size and front-drive layout, it’s a good fit between the cheaper droptop models and the luxury ragtops like the Audi A5 and BMW 3-Series.