A few years back, Ford and General Motors abandoned the minivan segment due to a lack of sales. At GM, entries like the Chevrolet Uplander, Buick Terraza, Saturn Signal and Pontiac , were incredibly uncompetitive with their counterparts from Honda, Nissan, Toyota and Chrysler. At Ford, the situation with the Windstar was no different. Declining interest due to a surge in crossover sales led both companies to leave the market.

But now, with fuel prices rising, Ford has found (an easy) way to enter the segment again. The European-sourced Transit Connect has done really well over the past few years as an economical delivery vehicle for businesses. To Ford’s surprise there was a lot of interest in a passenger version of the vehicle as well. 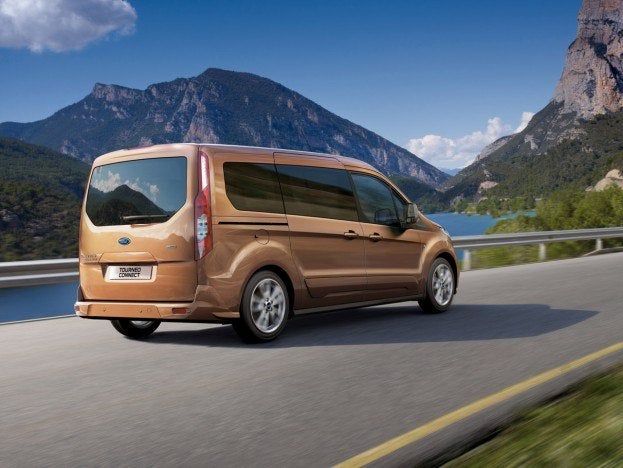 The result is the 2014 Ford Transit Connect wagon. It will be available in 5- and 7-seat configurations and Ford expects it to deliver over 30 mpg on the highway. With gas prices at high levels there could be a bigger market for this van than we think. Given its commercial roots, the focus is on practicality over anything else. For instance, Ford says there will be over 100 cubic feet of cargo space with the seats folded into the floor.

The larger 7-seat model has a longer wheel base and both variants are available with a choice of two 4 cylinder engines. The base model has a naturally-aspirated 2.5 liter four-cylinder and the up level variant has a 1.6-liter EcoBoost four. Details aren’t yet available on these two. The Transit Connect’s interior has been much improved for 2014, making it a more suitable vehicle for consumer use than before. Plus. there is no denying you’ll stand out driving it – the Transit Connect wagon is very European in appearance. Who knows though? Maybe this could catch on. Regardless, the effort comes as little cost to Ford.