The all-new 2013 Hyundai Elantra GT is a global car that hit U.S. showrooms this summer. It’s based on the new-generation i30 model that was designed for the European market. The U.S. version Elantra GT is a new five-door hatchback model and joins the Elantra sedan four-door as a sporty, versatile alternative to the more traditional sedan. The 2013 Elantra GT will compete with three top sellers – the Ford Focus, Mazda3 and Volkswagen Golf, while offering more interior volume than all three. Hyundai is designing and coming out with new vehicles faster than any other automaker and the new Elantra GT is the third of seven new cars that Hyundai will introduce in the next eleven months. 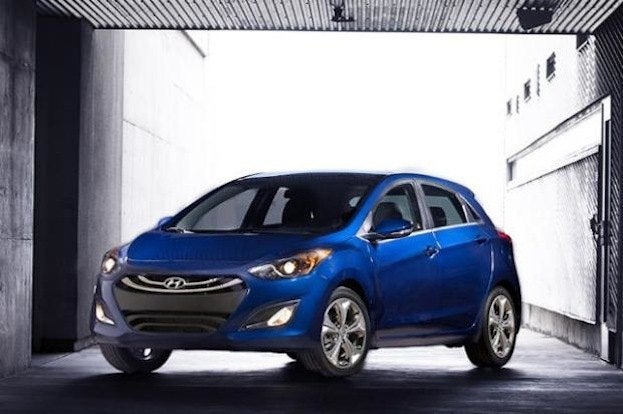 The Elantra GT is slippery with a class-leading .30 coefficient of drag. The five-door hatch is aerodynamic from the aggressive profile and that translates to fuel-efficiency. The lower curb weight of 2,784 pounds also helps Elantra GT achieve solid performance and excellent fuel economy. EPA ratings for all Elantra variants are some of the most competitive in the industry. The Elantra GT gets 27/39 mpg with the manual and 28/39 mpg with the automatic. But with the announcement just released from Hyundai, those EPA figures were figured inaccurately and will be adjusted down approximately 3 percent on any new vehicles in showrooms after October 31, 2012.

The Elantra GT is powered by a 1.8-liter four-cylinder engine rated at 148 horsepower and 131 pound-feet of torque. Two transmissions are available on the front-wheel-drive Elantra GT, either a six-speed manual or six-speed automatic transmission with Shiftronic. The engine has been designed using lightweight materials such as an aluminum block and head to help keep the GT relatively lightweight which also aids in fuel-efficiency. Hyundai also makes use of light high-strength steel throughout the GT by making an $8 billion dollar investment in its own fully integrated steel plant. The Elantra GT is also unique in its suspension that utilizes a V-beam rear suspension, instead of the torsion beam found on the sedan. This gives the GT  a firmer ride, but the hatchback stayed firmly planted during high-speed turns in tight corners in the mountains. When ordered with the Style Package, it also comes with the sport-tuned suspension for even more aggressive driving and further reduction of body roll around corners. The GT also offers three selectable steering modes, which offer heavier or lighter steering feel depending on driving conditions and driver preference. When is the Sport mode, the system worked as advertised and offered increased feel at higher speeds and on winding roads.

The 1.8-liter engine is high-revving and the peak horsepower doesn’t kick in until 6500 rpm. With the automatic transmission, we found the GT wanted to settle for a higher gear than it should while driving on more demanding uphill roads. But the Shiftronic allows the driver to shift manually and keep the rpm’s up for optimal power. Maximum performance can be obtained around 6300 rpm and the GT was happy to do so. The only thing lacking on the sporty GT would be steering-wheel-mounted paddle shifters. The cabin of the Elantra GT doesn’t feel like a entry-level compact and the heated leather seats and lather wrapped steering wheel give the sporty five-door a premium feel. The materials used have a quality feel and the fit and finish is better than other comparable compacts.

The Elantra GT’s hatch design allows for a roomy 23 cubic-feet of cargo volume, with a max 51 cubic-feet with the seats folded down. That’s more than the five-door versions of the Ford Focus and Mazda3, and is just one cubic foot short of the larger Subaru Impreza. The Dual-zone climate controls also incorporate an automatic defogging system, which detects humidity levels using a sensor and removes it from the windshield. Another premium feature in the Elantra GT is a CleanAir Ionizer that automatically cleans the air when the heater or air conditioner is running.

The Hyundai Elantra GT is among the best in the compact five-door class with an aerodynamic exterior design, plenty of standard interior features and excellent fuel economy. For those who want practicality and like to drive, the sporty 2013 Elantra GT needs to be on your list. 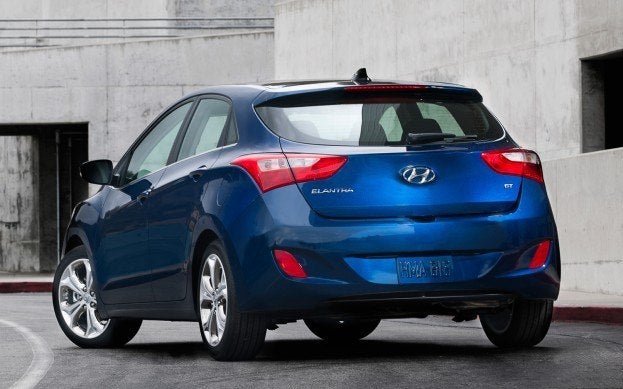