BMW’s been offering a rare “Frozen” special edition of their M3 Coupe for a few years now, and not to break the chain, they’ve just unveiled their latest – the 2013 BMW M3 Coupe Frozen Edition. Just in time for the US Presidential elections, it’s no surprise the three “frozen” (matte) colors available are red, white, and blue. And they look good. Interestingly, it wasn’t long ago that BMW began offering UK customers these exact colors on any M car.

But this is a special edition; they didn’t just throw a few new colors into the palette, and it’s only on the M3 Coupe. For the 2011 Frozen M3 Coupe, the car was only available in matte gray – and, at least in pictures, the car looked pretty boring. Despite that, only 30 were made and they all sold in less than 15 minutes. For 2012, the special edition M3 was Frozen Black, and that actually looked pretty wicked from the right angles. But nowadays, matte black is a bit overdone. 20 of those were made.

So for 2013, they’ve decided to (mostly) ditch the monochrome theme and offer up something a bit more exciting. 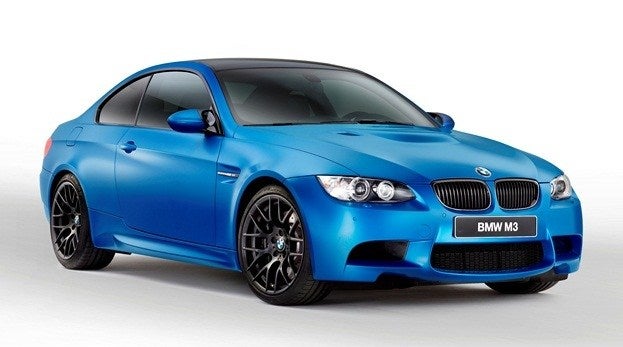 “Exciting,” of course, is a relative term. There aren’t any mechanical modifications at all – it’s the same 414 hp, 4-liter V8 engine powering the normal M3. But, that’s an exciting and excellent powertrain.

What does change is the aesthetics of the car. On the outside, in addition to the Frozen Red, White, or Blue colors, customers get gloss black kidney grilles, side gills, and exhaust pipe tips, which does look quite sexy. Thanks to the Competition Package automatically included in this version (more on that later,) we also get a suspension lowered by 10mm and 19″ matte black alloys, which I think complement the other bits nicely. Inside, BMW gives us Black Extended Novillo leather (a standard $2,000 option on any M3,) but with contrast stitching in the car’s exterior color on seats, headrests, door inserts, armrests, middle console, and door handles. That’s not a standard option, and it looks damn good. We also get carbon leather trim with the same contract stitching along the interior.

So I already talked about the 2013 Frozen Edition M3s including the Competition Package as standard. Along with the matte black wheels and lowered suspension, the package also includes some electronics to make your car a tad sportier: electronic damper control and sport mapping for the stability control. The special editions also includes the Premium Package, which includes stuff like a nav system, parking aids, voice command, power folding mirrors and rear sunshade, etc.

BMW are making this one a little bit more accessible than the previous Frozen Special Editions; they’re making 150 of them available for American customers, and will begin production in January 2013, The car’s base price: $76,395 – that’s about $15,000 over the base M3 Coupe’s base, but if you add all of the options that are standard on the Frozen Edition but optional on the regular M3, you get a car that has everything except the matte finish, gloss black grill, vent and exhaust tips, and contrast stitching in the inside, for $69,500. That means for those special additions, you’re paying about $7,000. Do you think it’s worth it, or is it just another gimmick?