Earlier this month, Tesla announced its sophisticated Supercharger setup. The network enables buyers of the 65 kWh and 85 kWh Model S to quick charge their cars in a record amount of time. The 85 kWh model can get charged up with 150 miles of range in just half an hour.

This is a breakthrough development that radically changes the way the car can be used. With a 300 mile range, not only is the Model S far capable than every other electric vehicle on the market, but the network opens up possibilities so much. A 300 mile initial charge and then 150 miles of range in just 30 minutes will enable a lot of ground to be covered in long-distance driving. 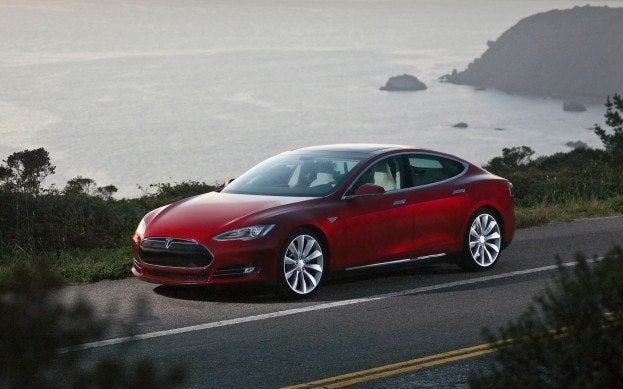 The Model S’ navigation system will calculate when stops are needed. Tesla is planning on installing these systems at key places along interstate highways (at locations with food btw) and the like. What’s more is that each system is solar powered, actually putting power to the gird. Technology is all great if its something in the future, but what about today.

Something pretty remarkable about the Supercharger announcement was that Tesla had already built six of the stations in secret. They are already operational, meaning that this technology has come to us here and now.

Now Tesla has designated October 19th is “Supercharging” day, meaning that the automated Supercharger stations will be officially opened up to the public. The six locations include Folsom, Gilroy, Harris Ranch, Tejon Ranch, Barstow and Los Angeles. That instantly opens a huge coverage area of California. And, more is coming.

Tesla plans to install stations from Vancouver to San Diego and Los Angeles to New York, giving Model S owners the ability to drive cross-country. Every future Tesla will be Supercharger compatible, meaning that the company is building an network today that will be utilized by future entry level models. Are we excited? You bet. Stay tuned for more news as Tesla prepares to announce future site locations for the Supercharger.