Just about everyone wants to lose weight. That is something true in the car industry as well as with people. As far as cars though, historically they have gotten heavier and heavier with each passing generation. Lately though, we’ve seen a number of new models buck this trend. That is thanks to the use of things like high-strength steel and aluminum. Weight can’t be taken out as far as components – manufacturers like Honda often have light cars but they’re also really loud on the highway, for instance (less sound deadening).

Weight reduction is key to boosting fuel economy so it is something that is being focused on. Ford has announced a new partnership today between it and Dow Automotive. The goal is “establishing an economical source of automotive-grade carbon fiber, as well as high-volume manufacturing methods.” 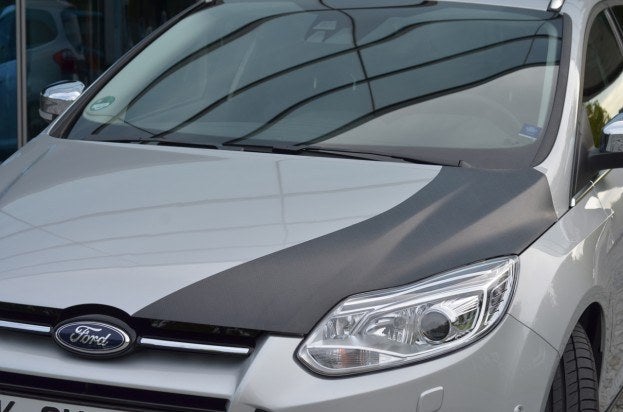 Initially the work will center around reducing weight in future Ford battery electrics as well as plug-in hybrids. However, the expertise will be applied to vehicles up and down the range. Most of the work is being done at Ford’s European Research Center using CFRP – that is, Carbon Fiber Reinforced Plastic. The problem with carbon fiber is its expensive and difficult to manufacturer in large quantities. Those two issues go hand in hand. To illustrate the benefits, Ford created a CFRP hood for the Focus.

It weighs 50 percent less than a conventional hood. Ford says it meets all standards for stiffness, dent resistance and crash performance (including pedestrian safety). As is the case with most advancements, carbon fiber will likely be gradually introduced to the lineup starting with more expensive models. “Customers of Ford’s multi-million selling passenger cars should not expect to see carbon fiber-bodied examples on sale in the near future,” says Inga Wehmeyer, and advanced materials and research designer at Ford’s European Research Center. However, Ford says you could see elements like the carbon fiber hood applied at a later date. The company has a goal to reduce average weight by 750 pounds by 2020, so we imagine they’ll use whatever methods possible to do so.