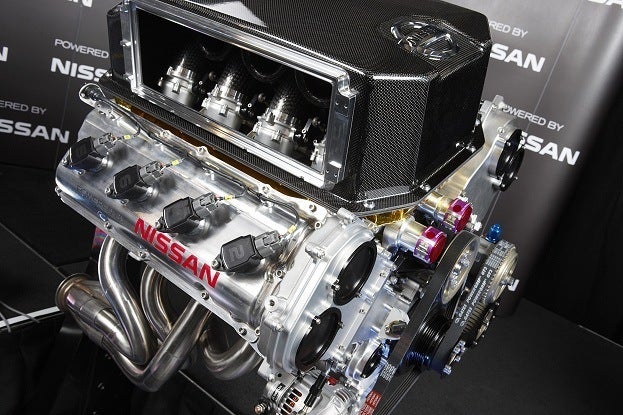 It was not until the Infiniti line’s introduction to the United States and beyond in 1990 that Nissan began to mass market a V8 engine. Currently, Nissan’s VK V8 engine design has grown to be a utility player in the Japanese auto brand’s global plan. Used in luxury, sport utility and commercial applications, the VK line of powerplants have also been the basis for motorsport efforts by Nissan. Powering the Nissan GT-R FIA GT1 cars, the production-based V8 engine’s next foray will be into the Australian V8 Supercar Series.

Unveiled earlier this month, a 5-liter version of the Nissan VK engine is slated to join the already-established battle between Ford and Holden racing on road courses Down Under. Nissan’s new engine has been readied for the upcoming 2013 season of the Australian V8 Supercar Series where massively adjusted vehicle specifications will take place for the first time in 20 years. Specifying new rules in safety and reducing costs, the so-called Car of the Future in the V-8 Supercar Series for next season will notably include a weight reduction, 18 wheels inside of racing tires and repositioning of the fuel cell as well as engine. The changes present the opportunity for Nissan to rejoin Australian touring car racing after what is said to be 20-year absence.

Campaigning the only production-based engine to be used in the Australian V8 Supercar Series, Nissan Australia CEO William F. Peffer, Jr. proclaims, “This technology which we use in road cars will transform under the harshest conditions of everyday racing.”. While close to the road-going engine, some modifications have entailed some special considerations. In order to comply with V8 Supercar Series regulations, Nissan’s auto racing-focused Nismo was required to reduce the displacement of the VK engine from 5.6 to a 5-liter powerplant. The reduction of displacement is accomplished through an alternation of the bore and stroke of the VK56 engine.

Showing off the 2013 Australian V8 Supercar engine for the first time, Nissan attracted the veteran driver/owner Todd Kelly. A 2005 Bathurst 1000 winning driver, Kelly was first brought to attention of Australian motorsports driving a Kmart-sponsored vehicle in the V8 Supercar Series (in Australia, the retailer continues to operate stores as well as other connected ventures including Kmart Tyres and Auto Service). The Kelly Racing team will be leaving behind the Holden Commodore in favour for a Nissan race car for 2013.

A very popular motorsport in its native land, the Australian V8 Supercar Series has gained recognition worldwide. The success of former V8 Supercar driver Marcos Ambrose in the NASCAR Sprint Cup Series and a field of famous drivers making one-off appearances in the Surfers Paradise events of recent years have elevated the exposure of V8 Supercar Series to be internationally significant. Once confined to the continent of Australia, the V8 Supercar Series added a trip to Abu Dhabi in 2010. In 2013, the series is slated to appear in the United States to compete on the Circuit of the Americas near Austin, Texas. Nissan has indeed chosen a momentous year to jump back into touring car competition.