Over the past few years, a new order has emerged in the compact car segment. Stalwarts like the Toyota Corolla and Honda Civic have been eclipsed competitively by models like the Chevrolet Cruze, Ford Focus, and Hyundai Elantra. The 2012 Ford Focus has been one of the most successful among them. In fact, Ford claims that it is the best-selling car in the world so far this year.

There is some controversy over how to tally things up though. As one of the pioneers of the “One Ford” strategy, the Focus is the same vehicle globally and it is sold under one nameplate. That is in contrast to the Corolla, which is sold under different names and can have styling variations. When you include every Corolla variant, it wins, but you get the idea – Focus is either the best- or second-best-selling car in the world, period. With that kind of a track record, you must be doing something right. We sampled the 2012 Ford Focus for a week to find out what. The Focus’s exterior is a strong point – it is one of the most dynamically styled cars in the segment. It’s taut, European, and fresh-caught in the time period between Ford’s American-centric looks and the global new “One Ford” styling language showing up o the Fusion.

Our tester was equipped with sporty five-spoke wheels that featured piano-black accents. They won a lot of compliments. Combined with our tester’s sports package that included a small rear spoiler, our Focus gave off an athletic appearance.

Unfortunately, athleticism didn’t quite carry over to the driving experience. The Focus complained when pushed, and there was a good amount of body roll on the switchbacks. Of course, this is a front-wheel-drive economy car we’re talking about here. Still, we would have liked for it to be more willing. The Focus Titanium is much tauter and offers a handling package, and that is definitely a box we would check if we were getting the Focus in that trim level.

For most, handling is not a top priority – it is something that can be overlooked. However, behind the wheel, we ran into other problems – such as the Focus being clearly underpowered. Shifting wasn’t a casual experience; it was more about wringing every last bit of power out of the engine. This isn’t a segment about horsepower by any means. But somehow, other cars in the segment, such as the Chevrolet Cruze, manage to feel more sprightly. 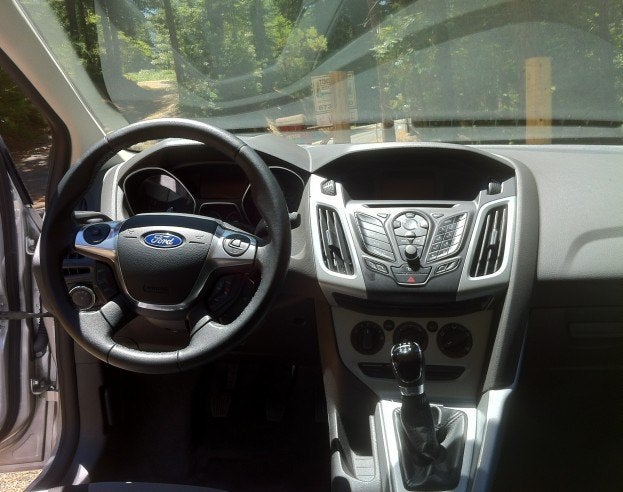 Inside, the story for the driver and front passenger is much better. The Focus’s interior is very fresh and youthful, which is exactly what the designers were aiming for. The Focus garners very high marks for design, fit and finish, and material quality. Ford has really stepped up their game in interior design. Combined with excellent technologies like SYNC and the interior is a strong point in the Focus – for the front passengers anyway.

Out back, there were issues, such as the fact that the Focus’ swoopy exterior design limits headroom and visibility. The lack of legroom made it feel even more cramped than it was. Combined with a lack of a center console armrest, and it wasn’t a great place for passengers to spend time. One nice detail we noticed, though, was deep cutouts into the rear door panels. They provided a noticeable amount of extra width.

After a week with the Focus, we weren’t as enamored with it as we were initially. It was a surprising sentiment, given that our first perceptions of it were different. On our first day, we quite liked the Focus, but it grew tiring as the week wore on. This stands in contrast to our experience with other models in this segment, such as the Chevrolet Cruze.

With hundreds of thousands sold globally this year so far, though, the Focus is clearly offering something customers are interested in. The Focus is a good car – especially if you put a premium on style and technology. Just opt for a better engine, handling package, and – dare we say it – an automatic transmission.