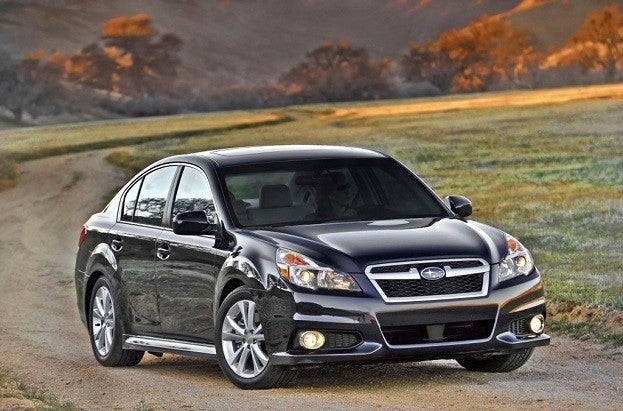 For the 2013 model year, the Legacy gets a number of updates like redesigned front styling with new grille, headlights and bumper cover. Underneath, the midsize sedan gets chassis enhancements for a smoother, quieter ride and improved agility. And the new Legacy features a new driver-assist system that adds an extra level of safety never offered on the Japanese sedan before.

But the big news for the 2013 Subaru Legacy, however, is a newly optional “EyeSight Driver-Assist” system. The available EyeSight driver-assist system includes Pre-Collision Braking; Pedestrian Detection; Lane Departure and Sway Warning and Adaptive Cruise Control. Systems like this are usually found on cars from the premium brand automakers. The new system uses a unique stereo camera design developed by Subaru to provide a detection angle wider than that of radar-based systems.

The EyeSight system can identify vehicles, obstacles, traffic lanes, and other objects and alerts the driver to avoid a collision. At speeds below 19 mph, the system can even detect pedestrians that could be in the cars path. Subaru says under certain circumstances, EyeSight is able to bring the car to a complete stop. At speeds above 19 mph, the system applies the brakes when an object is detected if it senses the driver is not taking proper evasive action.

The Lane Departure and Sway Warning feature that is included in the new EyeSight system can detect if the car begins to wander outside the intended lane without a turn signal being used, or if the car begins to drift within the travel lane. Both systems worked as advertised and will keep a driver who is not alert, from getting into trouble. 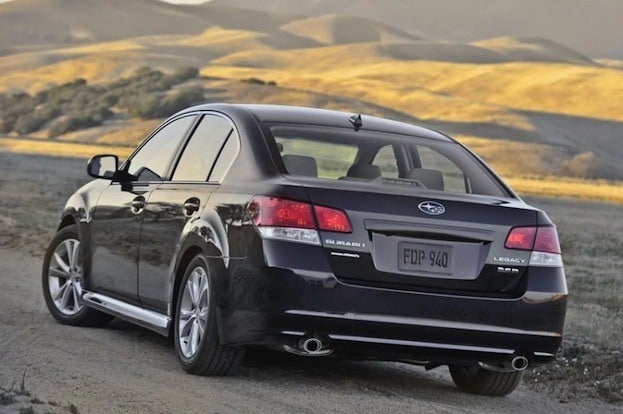 Another safety feature include with EyeSight, is the Adaptive Cruise Control system that is intended for freeway use. The system maintains a driver-selected distance from the vehicle in front, braking and/or accelerating the car as needed to maintain a safe traveling distance.

The Adaptive Cruise Control is operational from 1-87 mph and can brake the vehicle to a complete stop when it senses trouble ahead. The system works well for maintaining distance from the vehicle ahead in “stop and go” freeway traffic. The EyeSight system will also alert the driver of changes in a cars direction ahead and cuts the throttle if the accelerator pedal continues to be pushed.

Retuned Suspension and exclusive AWD system on the 3.6R

Subaru has added a number of suspension enhancements to the new 2013 Legacy. The body structure has been strengthened and stiffened to ensure a quieter ride and improved handling characteristics. Body roll has been reduced by an amazing 40 percent due to Subaru engineers increasing the diameter of the double-wishbone rear suspension’s sway bar and also increasing the spring and damper rates and bushing stiffness. 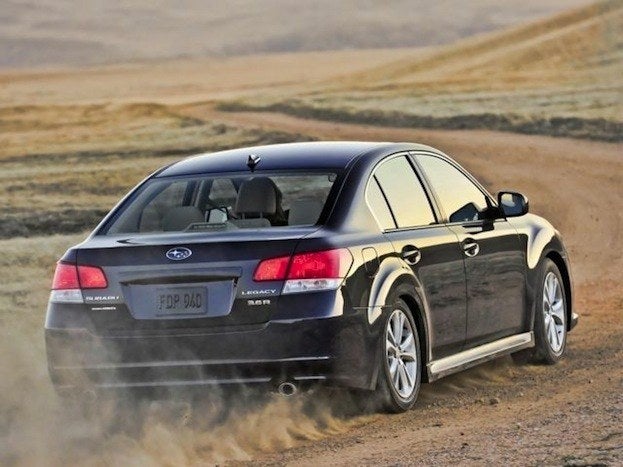 The 2013 Legacy 3.6R features the Variable Torque Distribution (VTD) AWD system with a five-speed electronic automatic transmission. This exclusive system is only available on the 3.6R models. The unique VTD system can send more power to the rear wheels when needed for optimal handling and performance,   and it can continuously adjust power distribution in response to driving and road conditions.

The 2013 Legacy 3.6R is powered by a 3.6-liter flat six-cylinder boxer aluminum engine and remains unchanged from the 2012 model. The engine produces 256 horsepower and 247 lb.-ft. of torque. The five-speed automatic transmission comes with paddle shifters for more spirited driving. The 2013 Legacy 3.6R gets 18/25 city/highway using regular unleaded fuel. Overall, the 2013 Legacy 3.6R Limited is a premium model sedan that features the best all-wheel-drive system available. And with the new suspension enhancements, it’s even more of a driver’s car. Add in the new EyeSight system, and you have one of the safest all-wheel-drive vehicles on the road.