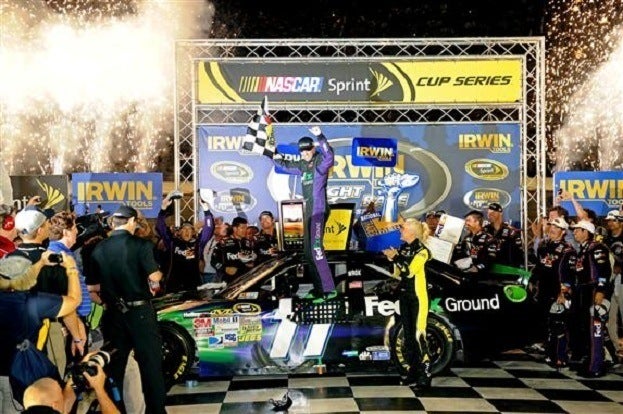 An important time leading up to the NASCAR Sprint Cup’s 10-race championship Chase, a Saturday night event at the 0.533-mile Bristol Motor Speedway was the third-to-last chance for potential contenders to mount a charge for the 2012 stock car championship.

At one time the hottest ticket in the NASCAR Sprint Cup Series tour, the past several years of racing on the concrete-paved short track has contributed to a noticeable decrease in spectator numbers. It was argued the Bristol Motor Speedway’s reworking performed several years ago made the track too uneventful for class short track battles with 800-horsepower machines. Following the earlier held 500-lap event at the Bristol Motor Speedway, the track was resurfaced in effort to improve the type of racing expected at the 0.533-mile oval ahead of the Irwin Tools Night Race.

Receiving one Friday practice session prior to qualifying, rain washed out the time trial that traditionally settles the NASCAR Sprint Cup race grid. In accordance to NASCAR rules, the times in the practice session would formulate the Irwin Tools Night Race 43-race field. This led to Casey Mears driving the #13 GEICO Ford serving as a surprise starter at the front for Saturday night. Leading valiantly fighting off the challenge from Brad Keselowski’s #2 Penske Racing Dodge early, Mears would be bettered by the #20 Toyota driven by Joey Logano for Joe Gibbs Racing. From the start, the Irwin Tools Night Race took shape as an old-style Bristol Motor Speedway battle where fenders and sheetmetal was bent significantly over the 500 laps. While rough and tough racing on the short track contributed to 13 cautions total for the night, the excitement of the Bristol Motor Speedway race was also driven by the fact no one driver would dominate the event. Early in the event, Joey Logano had fashioned himself as a potential winner leading 139 of the race’s first 348 laps. Logano would ultimately settle for an 8th place finish losing ground during pit stops late in the race. Dale Earnhardt Jr, Kasey Kahne, Martin Truex Jr and Matt Kenseth were part of the 22-driver collective that led the Saturday night short track race.

Producing some thrilling racing to watch, the Bristol, Tennessee track also brewed some bad tempers among the race participants. With no shortage of coming together a reason for 13 yellow flags flying over the course of 500 laps, the race was the scene to some of the most public outbursts from NASCAR Sprint Cup’s finest drivers. The most high-profile incident involved a bout between the #14 Chevrolet of Tony Stewart and the #17 Valvoline-sponsored Ford Fusion driven by Matt Kenseth fighting for the lead of the Irwin Tools Night Race at lap 333. Demonstrating the complexity of close quarter competition at Bristol, Kenseth and Stewart would also show the disastrous results when both race hard for the coveted lead. On the frontstretch, they’re battle ends with the #14 and #17 cars turning each other into the inside wall. With Tony Stewart sustaining the worse damage, the reigning 2011 NASCAR Sprint Cup champion would climb from his racing machine and chuck his helmet at Kenseth’s Roush-Fenway Racing owned Ford. 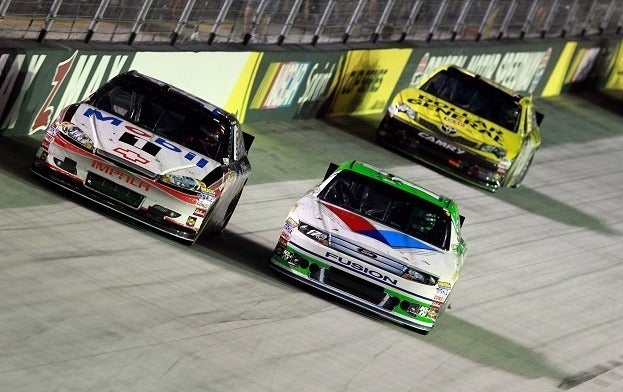 In the late stage of the Irwin Tools Night Race, a fuel strategy call made under a lap-415 caution allowed the #99 Roush-Fenway Racing Ford of Carl Edwards to hold the lead. Fighting to make the 2012 NASCAR Chase for the Sprint Cup, last year’s championship runner-up Edwards was attempting to use a win (or at least a strong finish) at Bristol as a springboard to enter the important top-10 in the driving standings. With Tony Stewart circulating many laps down at the end of the Saturday night race, Carl Edwards had a real opportunity to capitalize.

The 13th, final caution for a collision between Regan Smith‘s #78 Chevrolet and the #10 Chevrolet piloted by Danica Patrick gave the #99 Ford better odds for saving fuel to steal the win at Bristol Motor Speedway. However, on the field retook the green flag at lap-443, Carl Edwards found himself under the challenge of two different Toyota Camrys. First, the #55 Michael Waltrip Racing owed racecar driven by Brian Vickers mounted an aggressive effort to pass Carl Edwards only to almost lose control of his Toyota. Vickers was able to hold on brilliantly for a 4th place run in a part-time appearance at Bristol. On lap 462, Denny Hamlin’s #11 Toyota would ultimately defeat the #99 Ford of Carl Edwards. Taking a gamble on fuel, Edwards and his team would fall victim to a lack of fuel at the end of the 500-lap race practically crawling across the line in 22nd place.

Despite reports of a cooling system issue earlier in the race, Denny Hamlin and the #11 FedEx-sponsored Toyota Camry was calculated but determined to save themselves under the final 100-lap run. Hamlin’s pass on Edwards was in true stock car, short track style with minor contact between the two competitors. in the Irwin Tools Night Race at Bristol to win his 3rd event of the 2012 NASCAR Sprint Cup season. Holding in 8th spot in the overall driver points standings, Hamlin has been more determined than ever to win races and ultimately the Sprint Cup trophy in 2012. 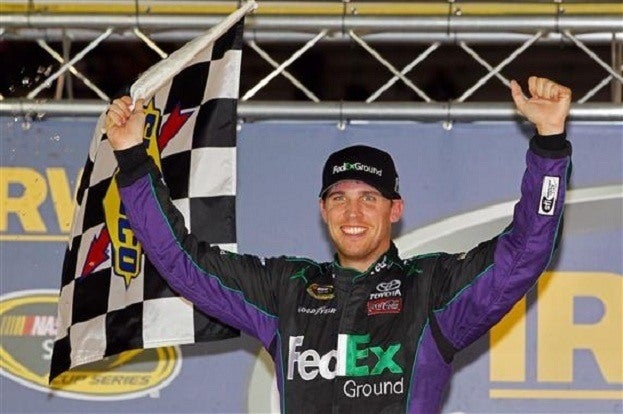