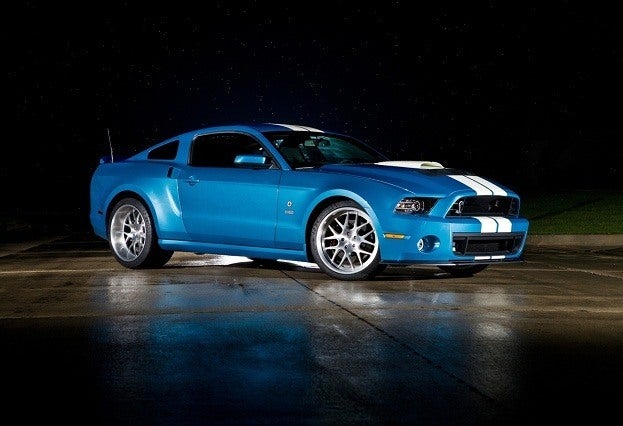 Passing in May, the loss of the legendary Carroll Shelby brought great sorrow to a crowd who had previously heard the revving of his many vehicle creations as a sign of the Texan’s life. Touching all three of the major American automakers, the Shelby touch lasted in the Ford Mustang to the point that a three-decade separation ending in 2005 continued to bring instant recognition in performance cars. In what is becoming a sizable number of tributes to a man that has made a big impact on the American sports cars, the latest piece remembrance to Carroll Shelby comes in the form of a special one-of-the-kind 2013 Ford Shelby GT500 hardtop.

Built by the “Friends of Carroll Shelby” (obviously a well-versed group in developing the qualities of motor vehicle production held true by their departed colleague), the one-off 2013 Ford Shelby GT500 Cobra commemorates 50 years since the AC Cobra roared forth to define American sports car history. Similar to the exterior look of early 1960s Cobra roadsters, Guardsman Blue with Wimbledon White stripes over the Shelby GT500 Cobra is an immediate dedication to where all the greatness started.

Beyond the historically derived paint scheme of this special Cobra edition, the 662-horsepower donor vehicle receives some 21st century performance touches. The most notable enhancement is conducted on the 5.8 liter V-8 powerplant of the Shelby GT500. Replacing the Eaton 2.3 liter supercharger unit with a 4-liter Ford Racing-sourced Whipple supercharger, the Shelby GT500 Cobra spins its rear wheels under the influence of over 850 horsepower. With nearly a 190 horsepower over the 2013 Shelby GT500 on sale, there is unfortunately no details for the acceleration or top speed of the unique 850-horsepower Cobra. For those recalling the ultra-rare, twin-supercharged 1966 Cobra Super Snake, the pounds to horsepower ratio estimates are around 5 pounds per horsepower. While there is no hard numbers connected to the 2013 Ford Shelby GT500 Cobra, approximate data would place the Friends of Carroll Shelby-produced vehicle around 4.7 pounds per horsepower. The 850-horsepower Ford Shelby GT500 Cobra is indeed a temptation to early race-enthused driver. Complementing the blue and white striping of the outside, a Shelby American body kit surrounds the 2013 Ford Shelby GT500 Cobra presenting a pronounced, wide-body stance. The center hood scoop is also a distinctive touch on this special 2013 Shelby GT500 stylized to recreate the functional intake incorporated on all AC Cobra roadsters. Full 20-inch wheels are housed inside massive high-performance tires optimized for traction and additional grip with rear tires of the 2013 Ford Shelby GT500 Cobra are 13-inch in width.

Making its public debut at the Rolex Monterey Motorsports Reunion at Mazda Raceway Laguna Seca this past weekend, the 2013 Ford Shelby GT500 Cobra is be touring the United States for the short-term. It is also indicated that the one-off Shelby GT500 Cobra will ultimately be used to in a way recognizing Carroll Shelby’s philanthropy according to Shelby American president John Luft. “In that spirit, this car will be taken on tour around the country, and hopefully will be used in a special way at the end of its tour – a way Carroll would appreciate.”, said Luft apparently suggesting the vehicle could become a sold for fundraising. For the record, Carroll Shelby had a long-running relationship with the Barrett-Jackson Auction Company.