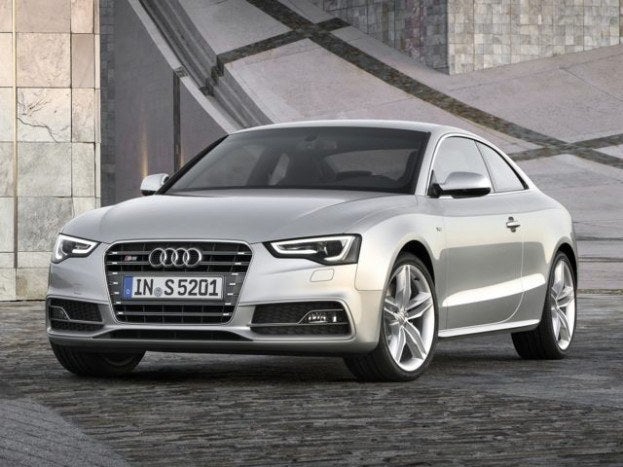 Audi has updated the 2013 S5 Coupe and there is much to report. The Audi S5 Coupe and Convertible have been near the top of the sexiest car list since being first introduced five years ago. The S5 Coupe has been the muscle car of the twins, and the Cabriolet has been more the gentleman’s sports car. But as with many automakers, the V8 is going the way of the dinosaur. As carmakers try to increase fuel mileage numbers, the V6 is replacing the fuel-thirsty V8.

The big news for the 2013 Audi S5 Coupe, is the 4.2-liter V8 is gone and the 3.0-liter V6 is in. The muscle car feel of the previous generation S5 is gone forever and brings us to the end of an era. But that may not be such a bad thing. As engine technology advances, we are seeing some exciting performance coming out of the V6 engine. With direct-injection, supercharging and an all-aluminum block, not too many tears will be shed for the outgoing S5 V8.

The high-compression V6 gives up some horsepower, 333 hp compared with the V8’s 354 hp, but the torque remains the same at 325 lb. ft. And the V6 provides its full compliment of torque earlier in the rpm range, at 2900 rpm’s versus 3500 for the bigger V8. Audi says the new V6 will sprint from 0-60 in just 4.6 seconds with an electronically limited top speed of 155. A big difference between the two engines

Another big difference between the two powerplants is in the fuel mileage numbers. EPA estimates are 16/city 19/highway for the V8 with the automatic versus 18/city 28/highway for the V6 with the seven-speed automatic gearbox. With those kind of fuel mileage differences, a little less engine growl won’t be missed for long. And it won’t take much more tweeking for Audi engineers to be able to squeeze out a few more horsepower from the 3.0-liter V6.

There are two transmission options available on the 2013 Audi S5. A six-speed manual gearbox and the seven-speed S tronic automatic with sport and manual shift modes. We test drove a coupe equipped with the S tronic and found the transmission to be well matched to the V6 in sport or manual modes. The S-specific sport suspension handled extremely well while navigating tight S-curves in the mountains west of Denver and the dual-circuit ventilated disc brakes that sat inside 19-inch wheels performed as advertised.

The 3.0-liter V6 has plenty of power in most driving situations and doesn’t leave the driver feeling like something is missing with the loss of the V8. The average driver will never miss the 21 horsepower loss even with the most spirited driving. Even at altitude, the 2013 S5 Coupe had plenty of power pulling steep grades going up I-70 over Vail Pass. 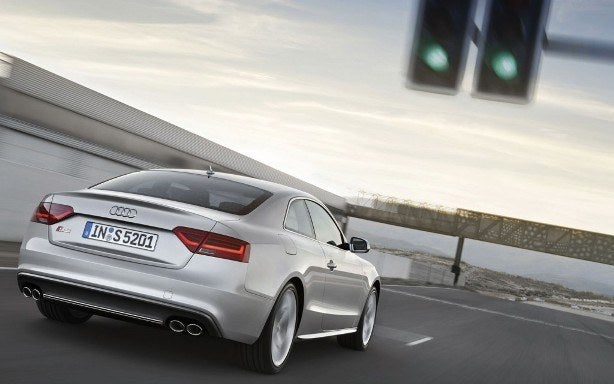 New updates in the S5 steering

Another change for 2013 is the new electromechanical speed-sensitive steering system that replaces the outgoing hydraulic system. This is the same system used on the A6 and A7 models. Audi seems to have tuned the more efficient system just right on the S5. The standard suspension on the S5 has been adjusted slightly from the previous model, with revisions to damper tuning and the rear trailing arms.

This S5 tester came with the optional dynamic steering system, which varies the ratio based on speed. This system uses the newly available active-lane-keeping system. Two levels of interference, early or late, determine when and how actively the car uses the electromechanical steering to take directional control from the driver. The system worked as advertised as the steering wheel moves back and forth on its own as the car corrected its course.

Other changes for the 2013 S5 model include new, sharp-edged headlights along with a more-tapered grille inside a more-aggressive fascia. The sport coupe also received a new set of LED taillights and a new rear fascia.

The interior has also been updated with new steering wheels with gloss-black accents that are borrowed from Audi’s big sedans. The car is equipped with the latest version of Audi’s MMI navigation and can now be optioned with Google Earth overlays for the navigation system. Overall, Audi has done a good job of upgrading and refining the 2013 S5. Audi engineers have designed more efficiency underhood without sacrificing performance, and there is more technology inside and out.