Safety, style, and function have always been elements of the Subaru lineup of vehicles, from the classic Brat to the modern WRX STI.  Never conforming to conventional tastes in design, Subaru has always pushed the element to bring unique shapes to the road, providing rides that will never be bland and boring.  The redesigned 2012 Impreza is no different, hitting the road with a great new look and equally great functions to match. 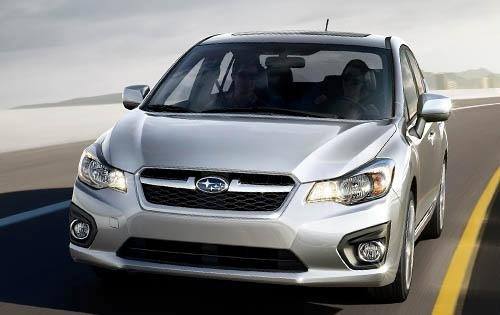 The new Impreza has grown up from the designs that are often associated with younger generations of drivers, but not so much to lose their unique touch.  From the smooth curves of the roofline to the aggressively cornered front and rear ends, the Impreza has a look of being able to take on any road challenge that lay in its path.  From the base level up to the WRX STI, the new Impreza is a well-rounded ride that will feel perfect for many different consumers, from the daily driver to rally enthusiast.

But the styling alone will not be a closing deal with this new ride, and with such a colorful heritage in driving history, there is no way this Impreza would be bland and boring on the road.  The vehicle tested was fitted with the base level 2.0i, not a powerhouse by any means, but good enough to get A to B with no issues.  0 to 60 was just under 10 seconds, about the same rate as a modern Prius, but that is because it is hauling around the famous all-wheel drive system.  The base Impreza might be a bit slower to 60, but it does so in a solid manner that doesn’t get in the way of the driving experience.

This modestly powered ride features quite a bag of features when it comes to other elements, including a well appointed interior, solid build, and a comfortably ride even on some of the worst maintained roads in the area.  For a highway cruiser, the horizontally opposed engine is quite good, quiet enough to allow for easy conversations but still providing that unique driving noise that is synonymous with Subaru. As mentioned, the interior of the Impreza is well appointed, with an ergonomically aligned dash with easy to use navigation and comfort controls.  The steering wheel had most the controls for interactive driving available, and was easy to get used to after a short while.  For its class, the Impreza has ample room in the front, but a minimal level in the rear that felt a bit underwhelming for an adult.  With minimal features in the back, including air and adjustable backrest, it almost feels as if the Impreza was designed only for front seat riders in mind.  While not a big downfall for the ride, when compared to other cars in its class, it’s lacking. This new Impreza stands to be an improvement over previous years, especially in features available and styling.  In keeping with Subaru tradition, it is a very solid ride that leaves little to the imagination about the safety features built in.  But with a few key features missing the standard set by competitors, including power and passenger comforts, it might be a tough sale at the basic level for many buyers.  The ride and build quality are there, but priced out with all the standard features found in other rides, it is a few grand extra coming out of the buyer’s pocket.  The big hope is that the drivers look past that price and realize they would be buying a car that will never be confused with another.