Dodging Out: Dodge To End NASCAR Support After 2012 In Tuesday, the hearts of many Mopar fans could be heard breaking. The President and CEO of the SRT (Street and Racing Technology) as well as Chrysler Group’s motorsport program Ralph Gilles delivered a sad announcement that will effectively park the 12-season old NASCAR Sprint Cup program as well as the Nationwide Series after 2012. In a pop announcement, Gilles officially declared that Chrysler would not be supplying any support to Dodge Chargers or Challengers racing in the premier stock car racing ranks.

While a shocking story, the announcement does not come as a surprise. Back in 2009 when Chrysler Group requested bailout funding to help with their structural bankruptcy, the involvement in NASCAR was criticized as being an expensive sponsorship venue. While Dodge did not have to leave motorsports, there was consolidation of their NASCAR program. In 2011 and 2012, the Dodge efforts circulated almost exclusively around Penske Racing for NASCAR Sprint Cup and NASCAR Nationwide competition with a driver line-up including Brad Keselowski. Just days after the this year‘s Daytona 500, the Roger Penske-owned racing organization had broadcasted a commitment to Ford for the upcoming 2013 stock car racing season. Attempts were made to find a suitor for the Dodge brand inside the Sprint Cup Series. NASCAR insiders had indicated Furniture Row Racing team (currently campaigning a Chevrolet Impala) as a potential Dodge Charger backer in 2013 with a possible two-car team forming. At the end, the no deals materialized to save the Chrysler-backed involvement. “A number of opportunities emerged, and our team worked diligently to put a structure together to fit our overall business and competitive objectives. While we have been pleased and enthused with the amount of interest from teams and sponsors over that time, in the end, we simply couldn’t develop the right structure.,” said Ralph Gilles. 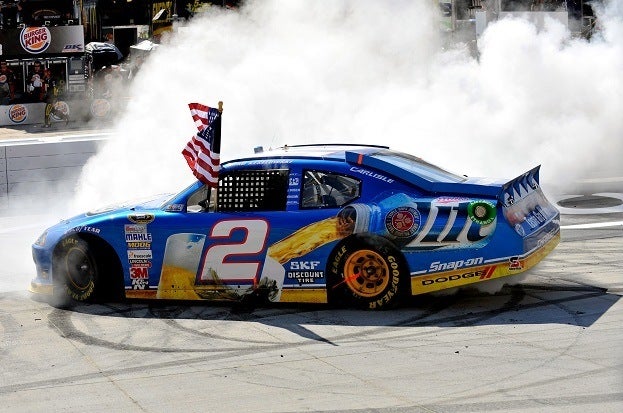 Possessing a storied history for stock car racing that involves a total of 215 race wins in the NASCAR Sprint Cup Series, Dodge‘s modern return to competition was eager to rekindle past greatness. Following Lee Petty winning the first NASCAR race in 1953 in what is known as the Sprint Cup Series, the major feat for the auto brand would be David Pearson clinching the 1966 driver’s championship in a Charger. For the Dodge make itself, two manufacturer’s championship in 1970 and 1975 were highlights for their participation in major league stock car racing. Withdrawing from NASCAR after the 1977 season ended with Richard Petty claiming a championship with the Dodge Charger, other Dodge products made a few appearances in NASCAR competition for several years afterwards. Racing a #43 Dodge Magnum to limited success during the 1978 season, Richard Petty and his team were even considering the use of a Dodge Mirada in 1981 for the Daytona 500 but were unable to achieve competitive speeds in testing. The decision to abandon the Chrysler product in favour of a Buick won Petty his seventh Daytona 500. A few other attempts in campaigning the Dodge Mirada would ultimately end in disappointment.

Dodge’s first claw-back into NASCAR occurred when they fielded several teams of Ram pickups in the new-founded Truck Series in 1995. As many predicted, the Truck Series effort ultimately led to the return of the brand to the NASCAR Sprint Cup Series in 2001. Collecting 55 wins since its comeback (a number that could rise with 15 races left this 2012 season in Sprint Cup), Dodge drivers would fall short of a Sprint Cup championship. Remarking to the departure of the Dodge brand from the top stock car racing series, NASCAR Chairman and CEO Brian France stated, “Dodge has been a great partner to NASCAR for many years, and they have been part of numerous memorable moments throughout our history,”. France understands that the Chrysler Group was making a business decision.

Earlier this year, Dodge (in an presentation that awkwardly involved their departing NASCAR partner Penske Racing) presented a 2013 Charger that was designed to correspond with styling perimeters offering more visual identity for next season‘s Sprint Cup schedule. With Chrysler’s support withdrawn, that stock car will not be present on the racetracks in 2013 based on the complexity of factory support in the Sprint Cup Series. There could be a different story in the Nationwide Series as no major rule changes could technically allow the Dodge Challenger the appear next season but it is highly unlikely based on the lack of manufacturer support.

Ending what will become 18 seasons of support in NASCAR dating back to the brand’s participation in the Truck Series, there will only be three vehicle makes represented in the NASCAR Sprint Cup Series. Without knowing what competition awaits in the 2013 NASCAR Sprint Cup Series, the remaining car makes Ford, Chevrolet and Toyota could be the new focus for disenchanted Mopar fans at the racetrack.