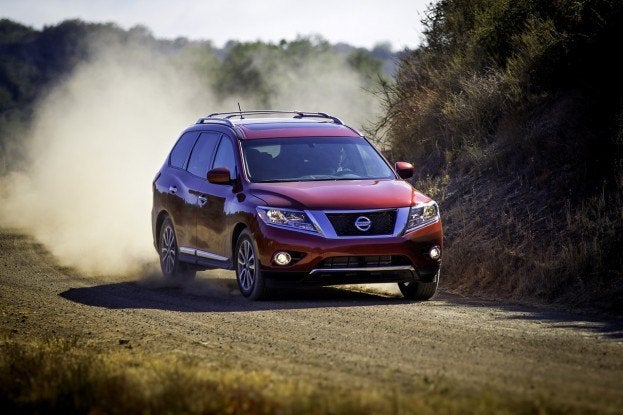 With the Pathfinder and X-Terra, Nissan has been one of few manufacturers to continually offer body-on-frame SUVs at the mid-size level. Manufacturers have been steadily ditching the BOF underpinnings for people movers. Their capabilities for towing and off-road use are seldom used (if at all) by most, while they weigh more, ride poorer and get worse fuel economy.

The Ford Explorer has rocketed up the sales charts after a unibody transformation, and Nissan has taken notice of this success. They polled their customers and found the same thing that Ford did – off-road ability isn’t what customers wanted. The result is the 2013 Nissan Pathfinder, based on the three-row Infiniti JX. The 2013 model has more of the attributes that the mainstream buyer wants – increased refinement, 30 percent better fuel economy and 500 pound reduction in curb weight. It isn’t too bad on the towing front either – 5,000 pounds. However, that figure down considerably from last year’s 7,000 pounds. With the design, Nissan has a hit a home run with the Pathfinder. The smooth front fascia works really well, and its relation to the Infiniti JX serves it well. We’re hoping this styling carries over to other Nissan products; concepts like the Invitation have indicated that it will.

For the 2013 Pathfinder, Nissan engineered a platform that is has true three-row capabilities – unlike the BOF 2012. In addition to reduced curb weight, efficiency is boosted by dropping two cylinders and adding Nissan’s dreaded Continuously Variable Transmission. Power comes from a 3.5-liter V-6 making 260 horsepower. The changes are good for 20 mpg city and 26 mpg highway for the front-wheel drive model, which are very nice figures. Adding all-wheel drive drops both by 1 MPG. Pricing should start a coupe of ticks under $30,000 for the front-wheel drive model. Like the Explorer, we’re expecting the Pathfinder to get a significant sales boost from this makeover. For those looking for BOF off-road capability at nissan, the X-Terra will solider on.