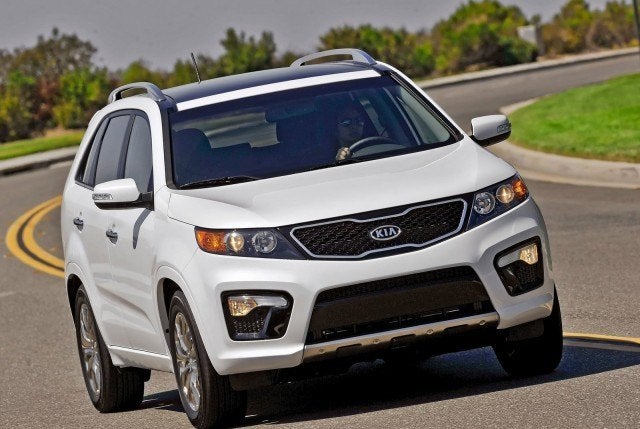 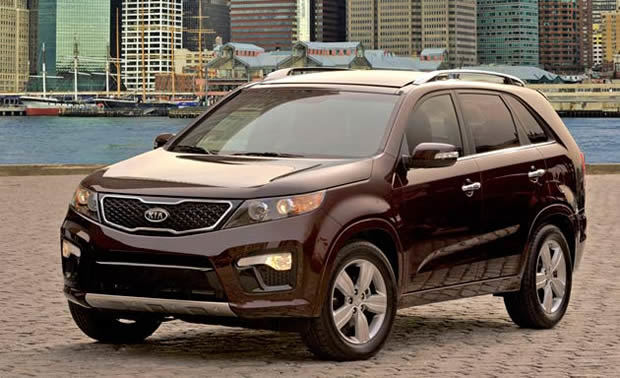 The Kia Sorento was completely redesigned for the 2011 model year and cruises into 2012 with a new engine with more power, improved fuel economy, and new technology to help the driver stay connected. The fully-equipped mid-size Sorento was redesigned last year with a new unibody construction and is much more car-like than before. The previous generation Sorento used a truck-based architecture, but the newly designed crossover is 600 pounds lighter, roomier, and offers greater cargo capacity.

We’ll be testing the EX AWD three-row model that seats seven. The 2012 Sorento competes in the midsize crossover segment with the Chevrolet Equinox, Toyota Highlander, Ford Edge, and Honda Pilot. With the Sorento’s new styling, engine and infotainment system, it offers a good value when compared with the competition. The Sorento is the first vehicle built at Kia Motors in West Point, Georgia and the company’s first vehicle to surpass sales of 100,000 in a single year. For 2012, the Kia Sorento features a new voice-activated infotainment system designed to help the driver stay connected without being distracting from the road ahead. The new system called UVO, is based on the Microsoft Windows Embedded Automotive platform.

The Sorento feels spacious inside and when equipped with seven-passenger seating configuration, it offers 149.4 cubic feet of interior volume. The compact crossover offers lots of legroom up front making it a good choice for taller drivers. The second row is comfortable and legroom is adequate for average size adults. As in most three-row vehicles, the Sorento’s third row is good for carrying adults short distances and good for small children. Overall, the 2012 Sorento interior offers good versatility with enough interior volume for passenger comfort and plenty of cargo carrying ability for grocery hauling during the week and camping trips in the mountains on the weekends.

The 2012 Sorento is available with a new four-cylinder engine that delivers excellent fuel economy. The new 2.4-liter Gas Direct Injection four-cylinder gets an EPA-rated 21/28 mpg with AWD. The 2.4-liter engine produces 191 horsepower and 181 lb. ft. of torque. The new GDI engine produces 10 percent more power and 7 percent more torque than the base engine. And it does this while getting slightly better fuel economy.

The 2012 Kia Sorento’s new unibody construction translates to a smooth and more comfortable ride over the previous generation model’s truck-based architecture. The lighter version handles better and is relatively quiet and feels stable on the road at high speeds. 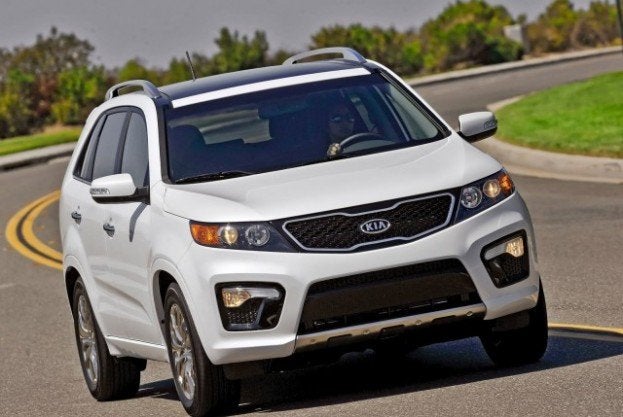 The suspension is tuned more for driving comfort and sport than for off-roading. Between the independent rear suspension, unibody architecture and power-assisted power steering, the Sorento handles the curves well when driven aggressively. The small crossover is agile and has a sporty feel to it. And the available full-time all-wheel-drive with locking rear differential offers good footing in dry or wet conditions.

The 2012 Kia Sorento EX AWD is a stylish compact crossover that has received numerous awards including being recognized as a 2011 “Top Safety Pick” by the Insurance Institute for Highway Safety (IIHS). The small SUV is a well-appointed, fuel efficient and functional vehicle that will haul the family or cargo. But the new engine and chassis offers performance and handling that will please the driver looking for a fun-to-drive sporty family hauler. 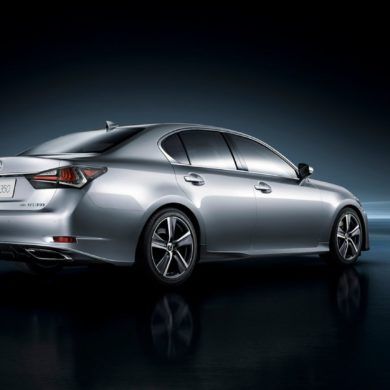