If you haven’t been following what the South Koreans are doing, it might look like they have come from nowhere and taken the automotive world by storm. Kia, which is owned by Hyundai Motor Group has been steadily moving up the automotive ladder in a number of key areas.

The quality of their cars has improved significantly, they are bringing new cars to market quicker than any other manufacturer and they are building stylish vehicles. The Kia Optima is a good example of what the South Koreans have been able to do.

When you think of family sedans, the first word most people associate with them is dull or boring. The 2012 Kia Optima is anything but dull. It is sleek, aggressive and modern. Although it doesn’t get many changes for the 2012 model year, it doesn’t need any. The big news this year; the 2012 Optima adds a Hybrid version to the lineup.

The Optima Hybrid can be driven in full-electric mode at speeds up to 62 miles per hour. Hyundai says when the car comes to a stop and the electrical load is low, the engine shuts off to completely eliminate idle fuel consumption and emissions.

We didn’t experience this in the week of testing the Hybrid. A unique Virtual Engine Sound System (VESS) plays a pre-recorded engine sound during electric-only operation up to 12 miles per hour, to help notify people outside the vehicle that it is approaching.

The 2012 Optima Hybrid features a display on the instrument panel with flowers that grow in the Eco mode. The driver can watch the bouquet grow which means the driver is being as green as possible while driving.

In the center of the instrument cluster, a display shows average and instant fuel mileage, with blue bars that move with the throttle position and scores the driver’s efficiency. An Eco guide with white, green and red zones flows back and forth between the wheels, battery, and engine, and is more of a distraction than anything very useful.

The Optima Hybrid is reasonably powerful. The gas engine and electric motor have enough power and torque to move the new hybrid sedan quickly. Because it’s a hybrid, there is no plug-in, so you just fill it up with gas and go.

The 2012 Kia Optima Hybrid gets an EPA-estimated 35/40 miles per gallon city/highway. But these are just estimates and in real-world driving, the Optima Hybrid won’t match these numbers. The only way to hit those numbers is to drive at 60 mph in Eco mode. That’s not very realistic for most drivers. Expect more like 33/35 city highway if you drive normal. 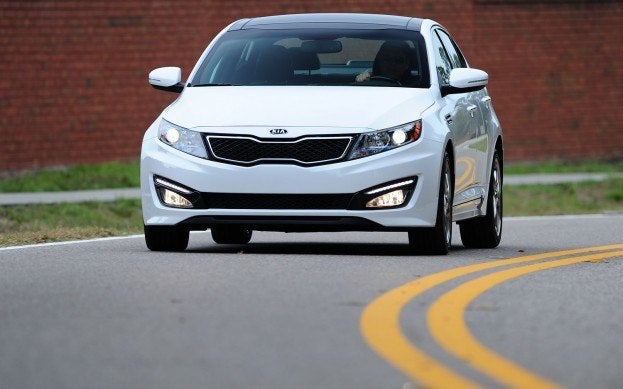 The 2012 Optima Hybrid uses a six-speed Sportmatic automatic transmission. The transmission is programmed for optimum fuel-mileage and not performance. The Hybrid transmission has a bit of hesitation when needing to accelerate quickly while in traffic. If you want performance, the Optima with the 2.0-liter turbo is the car for those who like to drive.

For 2012, the Kia Optima lineup includes three different models, each with distinctive characters. The base Optima EX is great for families, the fast and silky Turbo for sport minded drivers, and the new Hybrid which offers the best fuel mileage. The South Koreans are catching up fast to the competition and may have passed them in styling and sportiness.